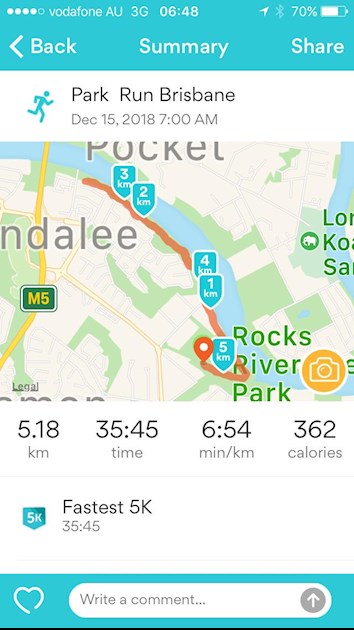 I did a Park Run in Brisbane yesterday. It was close enough to walk to, just took 20 mins to get there. A good warm up walk for my sore muscles which are no longer used to running. Chatting to the locals summer is too hot and muggy for PBs they just do maintenance runs. I went to the 40 mins starter marker (my time was 39 mins 8 secs 2 days previously) and off we went. I tried to find someone to use as a pacer but everyone around me slowly disappeared off in to the distance, so I just tried for slow and steady. I was a bit worried when Runkeeper announced the first km was well under 7 mins. The half way mark came up pretty quickly and as it was a 'there and back' run I had an idea of where I was up to on the return. Strangely 'back' was much further than there. Then the sun came out full force and I thought I might expire!

This run started a full 2 hours later than I'd gone out on my previous run and was unbearably hot. When I first looked up Australian Park Runs I doubted I'd get to one because they start at 7am. Historically I'm not a morning person. There I was wishing it had started at 6am! As were some of the locals I chatted to. I'd been up at 4:30 with the sun rise. It's the only bearable bit of the day when the humidity is so high.

So I had to give in and walk a couple of times on the return half. Then I put some effort in to the last l dash over the finish line. I was handed bar code 191 and I wasn't last. Runkeeper gave me a time of 35'45". That ladies and gentlemen is a PB! I was soaked to the skin in sweat and had a 20 min 'cool down' walk in the humidity to get back, then a quick shower and off to catch a plane to Sydney.

An electrical storm almost meant the flight didn't go, but we arrived safely only to have to wait for the luggage as 'the tarmac is closed' until the storm was over. All I could see from inside the terminal was sunshine so it was a bit surreal.

I'm going to have to do plenty of stretching. My legs feel like they did when I first started running. I can feel ALL the muscles in them. A couple of days rest I think before my next run.

Top tip for those thinking of running in very hot weather: don't put sunscreen on your face, it ends up running down your face with all the sweat, and stings when it gets in to your eyes. 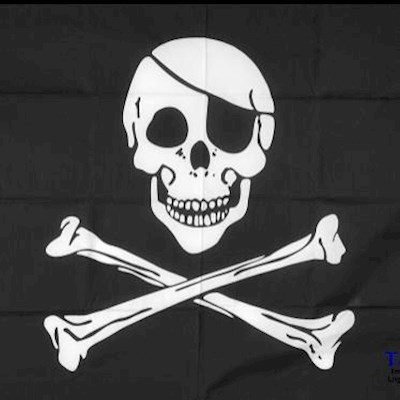 BaddieThePirate
Graduate10
To view profiles and participate in discussions please or .
14 Replies
•

Parkrun tourism is a fabulous thing. Familiar process, new place, new people, always a delight. That looks a nice course. I remember being in Brisbane a few years ago and thinking it’s south bank was a mini version of London’s South Bank. That visit was before my running days but I remember enjoying walking in that area, thankfully not in December heat.

A bit different to the weather here, as you will have seen in various posts on the forum! Congrats on your PB and on keeping going in that heat 😀

BaddieThePirateGraduate10 in reply to JonathanP

Thank you. I prefer heat to cold 🤗

That’s fantastic BaddieThePirate, a great PB! I bet your pride glow was as bright as the sun?! Ahhhhh, sun...seems like yonks since I’ve felt the sun on my face, phew, running in the heat while I was in France for the Summer was hard! Early mornings was the only time I could manage it. Oh how running changes us? Early mornings was unthinkable to me once...never mind running, put the both together now and it’s the perfect concoction!! Enjoy your time in Oz....it’s freezing here at the moment, the rain was freezing as soon as it hit the ground last night, brrrrrr...December has only one thing going for it and that’s Christmas Day!!

That would seem vert strange

Cooler inside singing so I was happy 🙃

BaddieThePirateGraduate10 in reply to Becky1606

Well done on your Ozzie Parkrun Baddie. How brilliant is that? Can you do Sydney Parkrun too?

BaddieThePirateGraduate10 in reply to Dexy5

Excellent! Getting your 5k PB being a tourist in Oz! 😸

Aw well done Baddie! That area is gorgeous if I remember it right. Fantastic to get a PB under those conditions

the woods and park - a mixture of surfaces.

So onwards and upward and maybe I can start the magic...

my 1st Tourist Park Run, my only run of the week.

Got there early wearing my Park Run Shirt and...

for a morning run before breakfast. We’re holidaying in North Yorkshire, just at the start of the...

for her final C25K week 2 run. Unfortunately my daughter and I had our run/walks slightly out of...

Tourist run 3, just for me

counting warm up or cool down walks.

We’re heading home tomorrow, so my next run will be back on my...