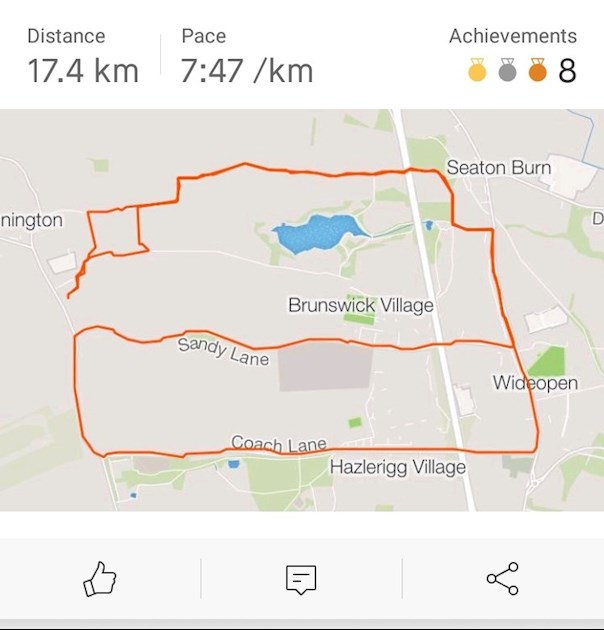 Managed just over 17k but slightly worried as towards the end of the run I developed a niggle in my left thigh. Nothing to painful but enough to slow me right down and eventually end the run slightly short of where I wanted.

A shame as for the first 10km I felt pretty good. Think I might miss my mid week shorter run and wait until next weekend to run again as I don't want to aggravate it any further.

Just 3 weeks to go now until the big day. 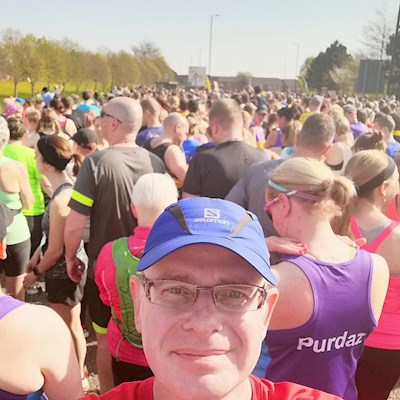 ChrisAllen1
Graduate10
To view profiles and participate in discussions please or .
14 Replies
•

Good run Chris. Wise decision to rest it til the weekend, don’t want you getting injured prior to the big day 😊🏃🏃

🤷‍♀️ It’s as regular as clockwork, bl**dy annoying too 🤨. I put it down to anxiety. I think we get tense, perhaps, maybe 😃

Good luck for running in the Great North Run in a few weeks, it was the Great North Run and the Great Scottish Run a few weeks later that inspired me to start running with the C25K program. I was watching both those events on the TV and during one of the breaks from the running they mentioned this training program that anyone could do. It did take me a few months to start the running as the winter intervened with all the snow and ice. I was going to start at the beginning of March but because of "the beast from the East" and the very cold weather in March I did not start C25K until April, April the 18 was when I started with run 1 of week 1.

Hope the thigh settles down, and good luck for the big day! 👍🍀🏃‍♂️❤️

My nephew will be running his first ever HM at this year’s GNR, so I’ll keep my fingers crossed for both of you. 🤞

I'm sure you've checked but are your laces too tight? That can cause strain that goes all the way up. That was my issue at one stage, and once I loosened them up slightly, letting more freedom around the ankle area, I ran like a cheetah. An old cheetah. A very old cheetah. A spent cheetah.

Haha, I will make sure they are loose enough next weekend. 😁

Fantastic run...them niggles are annoying but 17kms is amazing!!

Sounds like to have made the right decision to take a bit of a break - most of your prep will be done now, so take it easy and you will find you feel fresh on the day!🙂

Fantastic run Chris! 17k is amazing! Best of luck for the big day ahead too! ❤️

Hope it settles. Sounds like you're well prepared. Week before I did it last year acute upper back pain on one of my final runs, agony even to walk - had to get bus home. Osteopath saved the day and I learnt I am right to always take my bus pass out with me. Thank goodness hadn't headed off cross country. Right to take it easy, maybe these things are a rite of passage. Good luck.

Good idea to rest up a bit Chris, its called tapering isn't it?

Take care and don't worry...you will nail it on Race day!xxx

It's interesting how the niggles beghin to develop once you start pushing the distance - at last I've found it to be so.

do a 10k hopefully mid week then it's the big one next weekend. Run happy, run safe.

a couple of shorter runs before the big day. Hope everyone enjoys their running this week and...

Last long run (16k) before my last organised race in 2018, the year feels like it's winding down.

A tougher go than last week.

halfway through and slowed slightly till it passed, then after looping back, got a short lived...