Completed couch25k about 2 months ago and quite happy running 5ks in 30-40 mins.

Work has been mental over the last 6 weeks and my 3 runs/15km a week have reduced to 1 or 2 runs, some of only 3km. Due to the heat I have also been running at night on pavements whereas normally there is some (25%) grass/earth.

Over the last week to 10 days my left knee has started to give me gyp. It's an old injury, I don't know where from, since I was a teenager, it sounds like it's creaking and grinding especially when under load, and gives a bit of a twinge, with aching even when I'm not using it.

Last time it resurfaced badly was 10 years or so ago but it eventually went away on its own.

I have rested it and the aching is less but it still grinds and creaks and I am really frustrated as I haven't run for over a week. I have had my gait analysed, I have decent trainers, I try to run in a low impact way if that is possible. I've been running 6 months and only had a slight problem with it before which a few days rest sorted.

Don't know why I'm posting except out of frustration, lovely morning here, fresh after a storm last night, but I bottled the parkrun this morning as I don't want to make it worse.

I am trying to listen to my body, but I don't know what I've done wrong to make it hurt so I don't know how to stop it happening again... 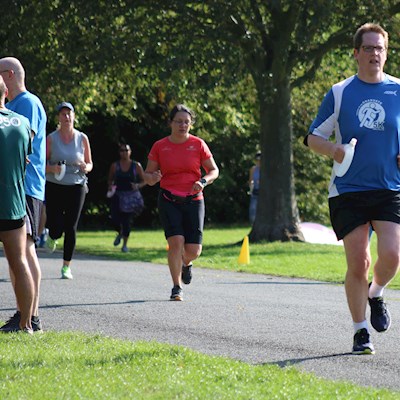 NiceBloke
To view profiles and participate in discussions please or .
14 Replies
•

The first thing that comes to mind is shoes. If you’re getting knee pain with increased road work, might be worth looking into if your shoes need replacing, and if you aren’t in properly fitted running shoes, that could be the problem too.

I've got a pair of 2 month old ASICS gel Cumulus, and my gait is neutral as assessed a few months back. It's actually happened when I've been running less whilst I've been busy with work, so I'm fairly confident the shoes are not the issue.

I wonder if, feeling you're not going out for a long one, you are going faster than you think you are? I find my cheeky little ones on tarmac are often faster than I was expecting and take a lot more getting over.

It's always possible, pace has been generally slightly slower according to Strava though - 6'30 per km instead of 6'00...

I’d say get it checked out especially as you have a very old injury there, and take care

NiceBloke in reply to ju-ju-

Thanks, I will do, although the last time the doctor palmed me off on a physio which took months and they were very blasé about it and just gave me a few exercises I could have googled. Having said that I know I hung onto the exercises but I have spent the morning looking for them and can't find them!

It could be any number of things from tight muscles in your calves, glutes, hamstrings or quads. Try foam rolling and stretching.

Or it could be a cumulative effect of you running for a longer period of time and this has triggered your old injury. If the pain is on the outside of the knee then it could be ITB or maybe one of your hips is slightly out of sync. Or you could be flat footed. There are many reasons why you have the pain so maybe the best thing would be to see a sports physio and get it checked out and diagnosed so you know what you're dealing with.

Good luck and keep us updated.

Oh and do lots of strengthening exercises for your glutes. Many knee problems stem from weak glutes.

I feel your frustration! I don’t have any medical advice to offer other than getting it looked at by a good physio. (Not sure all of them are as helpful as others). You sound quite stressed with work and it sounds as though that is spilling over into the running. You may have to accept a short term ‘healing’ break for the long term running good?

I sometimes get an odd knee twinge - especially if I 'be been running loads on tarmac. I just take it a bit easier for a week or so and try to vary the running surface more.

Have you considered seeing a sports physio NiceBloke? I had knee problems before I started running and a specialist consultant referred me for physio. I was given various exercises to strengthen thigh and glute muscles and I haven’t had a problem with my knees since.

It will cost 40-50 pounds privately and I consider it was well worth it.

I'm in the same boat atm. Hoping that physio will sort me out. Frustrating I know. Prognosis is that knees and hips are basically fine, but my quads are really tight and it's doing "something" to my IT Band. Hopefully some decent strengthening exercises will do the trick for both of us.

Let us know how you get on okay?

Thanks all. Had a break of a couple of weeks now, tried a few exercises I found online. Been on holiday and done a bit of walking, nothing too strenuous but thought it would be good to use the knee. Not really made much difference to be honest, still a grinding creaking noise when putting effort through it (going uphill or stairs), and a bit achy with the odd twinge. Also feels tight across from top inner side across kneecap. No real improvement. I thought I might try a gentle 2k on grass today but I am definitely going to look for a sports physio. It's affecting my state of mind as one of the original reasons I took up running was to combat anxiety and clear my mind.

taking longer to recover from each run. Two runs last week including ParkRun on Saturday. Haven't...

so I didn't run for almost 2 weeks. A friend recommended orthopaedic insoles. I have run three times

Should I go to the physio for knee pain?

per run, but I had about a month's break after finishing the programme. Over these past 2 weeks I've

Continuous knee pain starting the night after a run?