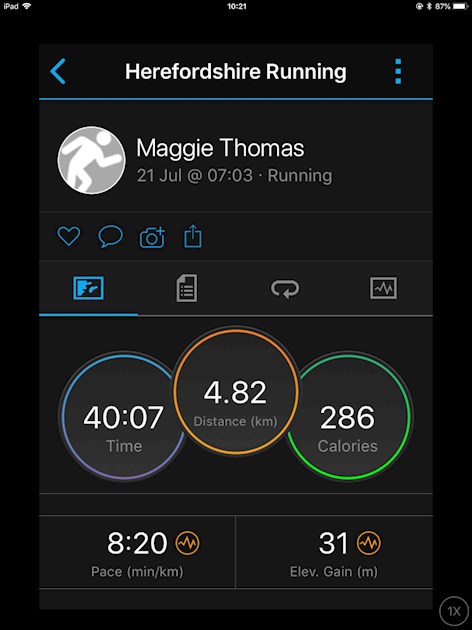 Well trotted out later than normal so it was a hot one this morning.Did any other trotters manage to get out?

I met some farmers on the way who had lost some cattle,actually it was only one that had bolted over a hedge after much irrational from the flies on it.

The farmers were looking to see if anymore had escaped. I replied that I hadn’t see any on my travels and if I had I would have probably ran the other way!ha! yes you’ve guessed it I’m petrified 😲😲of cows.As long as there is a fence,gate or hedge between them and me I’m ok.

I didn’t go to far this morning as I wanted to stay close to home as it was too hot.

I managed 4.82km in 40 mins. Not the best but with heavy legs,hot weather I wasn’t to worried. That’s it for this week ,three runs. Back to work Monday so it will be two runs a week now for a while.

Hope you are keeping cool and safe in this hot weather.🌞🌞

in reply to ju-ju-

Well done Peggy! I too got out later than I would normally (7:45 instead of 6:30!) and it was too hot. Wet buff around the neck trick keeps me cool though, that and the shade of the woods - phew! x

Thanks Sadie! Yes it was hot. I could’ve done with a wet buff. I think I might get one Good for you 👏👏getting out at that time.Its nice to have shade too. When I started off I had lovely breeze and I thought this will be good but that didn’t last long!😡

Like wise Flick well done on your run too sweetheart!😀😀. Yes it was really hot.Sorry your not feeling tip top☹️😢,plenty fluids Flick.

Take care Flick and pleased you got out there and that time is good especially since you not feeling too good.❤️Xxx

Well done Peggy, I think you are wise to stay close to home while it is so hot. Next week it’s getting hotter too. I must get that buff out of my ski clothing box as that sounds like a great idea. Also putting a water bottle in the freezer the night before. Happy trotting 🏃‍♀️

in reply to Dexy5

Thanks Dexy! That’s a great idea about water bottle in freezer over night,I’ll have to try that!

Yes you mustn’t fill the bottle though, leave room for expansion 🏃‍♀️💦

So Dexy do you mean just put an empty water bottle in the freezer or don’t fill the bottle up to the top? 😀😀

nearby to run but these are the cards I’m dealt with and I make the most of it and enjoy it . When...
•
18 Replies

⛰⛰than the other ones or is it because I hadn’t ran this way for a while. Anyway it was a nice run...
•
11 Replies

glorious, sunny and hot morning. Peggy59 and I are heading out for a pre-breakfast virtual run...

Breakfast trotters and a curious conundrum!

the trail for my first early morning Breakfast Trotters run. It was a glorious morning,...

Pursuits for my first winter as a trotter.

🇦🇪 with family. I managed to keep my trotting ticking over, although I did not manage my 3...