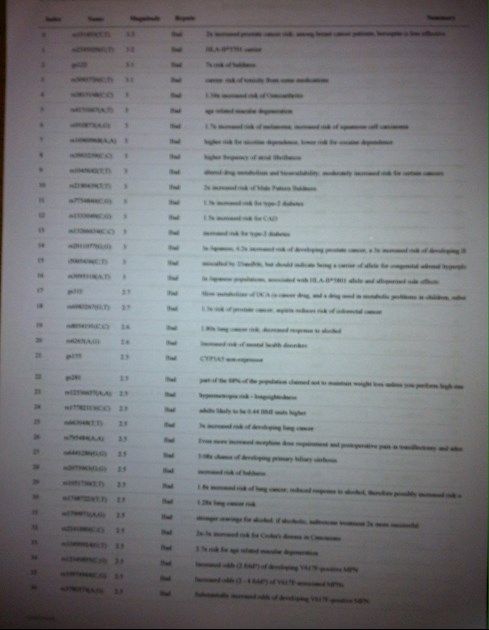 Well today i found myself at my GP's WHY intermittent breathlessness.

Well after all clear and exam i was told breathing issues was smoking and anxerty NOT infection .

Then my GP asked about my DNA results said was note on systerm.

I told him given my problems i was intrested and skeptical as to what test would show if anything.

The my GP was saying about scan's test i have had HE was clearly amazed my lung tumour had vanished on its own for no appart ression.

Told me i was very lucky TO which i agreed THEN he told me my reults i submited was being looked at and uploaded to nhs gp file.

I pointed out asked could me being a carrier of Cystic Fibrosis allea be ression for all my issues.

My GP was genuanly intrested AND defo make a change to have some willing to listern talk.

The GP told me that they would have to look into this CF and what my dna said about vitamin D defiancy antibody issues and folate malabsorption issues DNA Report flaged.

Said would take few days BUT next time have questions re results flaged and what am suffering BRING in paper work with highlited bits.

vitamin D and folate malabsorbtion, inflammatory problems, mild form of CF. ( think I'm going to get my DNA tested for that) all rings bells Jeff.

Hi stillstanding i was skeptical and told 23andme nothing about my conditions.

My results was flaged for review goven results befour i got them.

I was surprised by results but not shocked.

Like me only we truly know what we are suffering but when results talk of inhalers and proton pumps defo something init.

23andMe wont disclose everything BIT fickle as the dont want to upset those in denile.

So can easy upload data to other sites the call it sharing but your identity is protected when share.

And they will disclose describe everything.

I did mine becouse i was sick of lies and not knowing what was going on.

Its not all horried as i have DNA where asprin protects me against cancer.

Also this fun bit like my DNA waights 6,something kg

Where did you do the DNA test?

Hi I did it privately at 23andme

In us and most of EU cost a fortune but over here google subsidise cost of test.

Why WELL in order to advance medical research understanding AND given it's subsidised google package data up and sell to research drug companies universities.

Anything that advances medical research am more than happy with BUT some can be fickle and that's there choose or loss.

But as end user am more than happy with my DNA results.

Great link poppy and thanks

kit ordered. It can't do any harm and will save the NHS money. They seem to do the cf DNA testing for some with supposed non cf bronch but not for most. I proved negative with the salt test but we shall see.

Hi Stillstanding think you will find it interesting WHEN doing sample DO it in morning first thing as you mouth will be full of DNA and you would not of had a drink.

But yer have read sweet test is not reliable for testing for CF really ... I have D;I allea with being cf carrier am not 100% think is from my mother.

Again am not 100% but think is pretty nasty one out of two allea can have as carrier.

thanks for the advice Jeff. I have had my doubts about the sweat test for years ( as has my consultant) but think that it is an easy way for the NHS put all bronchs or low level cf s in the do very little basket. Some on this site have had an NHS DNA test but certainly not all of us. It will be interesting to see because there is no apparant reason why I started having the pneumonias which led to the bronch and I have had lifelong food absorbtion difficulties.

Sounds like you might be right and test I think will point you in right direction of whats going on.

Keep us informed and defo share results if you want too

nancye in reply to

I have been reading up on this matter, which I find very interesting. My treatment for bronchiectasis is very much the same as the cf protocol (basically very aggressive airway clearance), and I see several references to the cf "spectrum". For myself, I don't care, but since cf is a genetic condition I am curious to know if I might have passed something on. The problem with the genetic testing is the number of genes tested. Apparently the basic test covers only the most common ones, then there is an intermediate test, and finally full gene sequencing which tests all nearly 2,000 genes. This test is costly and slow but is the only one that can confirm cf in the rarer cases. If you would like to read about testing experiences, try cysticfibrosis.com and you will find many stories. There are many frustrated people trying to confirm or rule out cf.

in reply to nancye

thank you for that Nancy. Yes, after so many years it is really academic, finding out if cf is involved. As I am one of the thirty percent for whom there was no apparant cause of bronch it would be good to rule cf in or out. Also, I have spent a lifetime being discriminated against in terms of the availability of drugs because I was classified as non cf. It is getting better now but again, to know would be a vindication.

I am pleased your GP is taking an interest JAS and l really do wish you well with everything. Take care. Xxxx

Hi sassy cheers thanks defo think advances are being made

did the hhs do ur dna test.

Nice to have a GP that listens to your concerns with genuine interest....good luck.

in reply to Kimm4

Hi cheers yer do have issues with blood cells but smoking makes it hard for doctors I think to diagnose .. But think issues is with plasma or something cells are made of BUT great link

Hi I am from New Zealand and cannot understand so many of you have this DNA. I always thought the police do a DNA on blood samples to match a crime. Not for checking health problems, we do not have this done in NZ. We just have blood tests.

Ye about Vit D. This is very important to your body, as we get older we all have a shortage of Vit D. The main Vit D is Vit D3. We can only get it from the SUN. So when winter comes people in Eutope and across the northern hemisphere have a shortage. I have been taking Vit D3 abs for the last 5 yrs. go onto Google and read up on Vit D 3. Very interesting. One part says about top doctors in the USA MAKE sure their family's take Vit D 3. Every day around 2,000 IUs.

Hi Shaurene, after much nagging I finally got my GP to test me for vit D deficiency. And boy was I deficient, even though I spend a lot of time in sunny climes in the winter and outside in the summer. I had very high dose supplement for five weeks and now on maintenance of 1600 iduper day. In a months time I will be tested again to see what my level is.

Surprising isn't it. Did you read up on it. And made sure the Doc gave you Vit D 3 supplements not just the Vit D.

I buy my bits from a company in USA VERY CHEAP compared to buying them in NZ or anywhere else. I also take Vit K with the Vit D3. They say you need that also. Hope you find you are benefiting from the VitD3.

yes vit D3. I also have a 3000 spray which I buy from a national chain of health stores. Within a week of starting the vit D 3 my hair stopped dropping out, my skin was better, appetite improved.

Hi Still really glad you took that advice as we can all learn a few things if we listen. I have been not bits for many many years. I also take and for many yeas Vit E capsule with the liquid oil in and Vit c. The E I also get the liquid out and put it on my face I used to have face skin probs flaky scin now never have it. Also makes your skin feel suffer as my wife says many times. Also I take COQ - 10. Read up on that.

So pleased your hard work is getting you somewhere & your GP is listening. It's great when medics have an open mind & are genuinely interested in a new approach. X

Hi cheers defo agree and think lot of gp could benefit and use as learning cure to benefit patients and there carers.

So glad your finally getting taken seriously.

Good luck on getting to the bottom of your symptoms. xx

down to chronic lung disease GUESS it still could.

NOW given DNA results and being CF Carrier the...

understand DNA or for that mater WHAT constitutes a condtion.

My report says i have impaired folate...

GP Incompetence That Nearly Cost You Your Life.

maintenance antibiotics when I got a infection.

Clearly when you get a infection when on...

fall I have not recovered AND nearly everyday am walking round dizzy NOUT. New there given lung...

This beautiful old tree with his own face 🎃🎃