Did you have a nickname when you wher... - Anxiety and Depre... 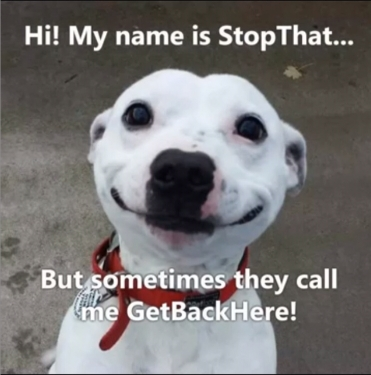 Do you still have one thats stuck from childhood?

I thought you where gonna say that lol

Cheers! Love you too 😘

in reply to Bazzak2 months ago

Bazzak in reply to 2 months ago

in reply to Bazzak2 months ago

Am I the only one who thinks that that dog's smile is creepy?

in reply to Norw2 months ago

My mum named me after a character on a kids programme, Torchy the Battery Boy , which might be before your time 🤔

When I was a teacher the kids did call me bossy as it rhymes with my surname ( which I wont reveal on here , obviously) So it did continue 😀🤗

interesting 😁yuv got me wonderring now 🤔

my dad callecalled me panda and bloss🤔

Twinklystar in reply to 2 months ago

My aunties nickname was blossom. Don't know why.

yes i dont here people call it now its a endearing term like sweetheart love darling honey, i hate it in hull women simetimes call me hun 🙄i dont like darl either 😂

Flower was one my mum used a lot. And naughty kids were called buggerlugs.

lol yes i remember them 😁

katydid333 in reply to Twinklystar2 months ago

My Dad called me Sunshine ☀️

well i got called panda 🙄😂

Hi! I love the meme. It made me laugh.

in reply to Nothing_but-pain2 months ago

I do. My middle name is Renee so everyone has called me Nae Nae sense I was little. My little nephews even call me there aunt nay nay

in reply to ashleybakerr012 months ago

This doggo meme is the best thing I've seen all day! Didn't have a nickname, just wanted to show this meme some love.

in reply to RupertBrown2 months ago

Hi! I have a nickname that I received from my best friend, who I met while in junior high school, and it has been a name that has stuck with me since then. The nickname is, “Shade.” It is not as used by those who are my friends anymore , because as time has gone on, I have moved from the place where I grew up during my youth many times. The people that I have met over the years, in all of the different areas that I’ve lived, they have never been given the chance to use the name. This was due to the fact that I was enlisted in the military that was responsible for my constantly moving, and so I mainly was called by my biological first or last name. The nickname though, is still primarily used by all of my friends, who remained in contact, and that still live in the area where I grew up. Also, the nickname is used by a few friends that I have that are in the area that I live in now.

not when I was younger....but I've had 1 for the last 26 years at work. I am a corrections officer and my nickname is turtle.....slow and steady wins the race...and keeps people safe

Most people liked to call me by my last name, but my Uncle Donald used to call me Rusty because I was a freckle face 🙂

My older brother ( by 18 months ) couldn't pronounce my name, Linda, so he called me Deeda. The name stuck for years, ultimately morphing into Deed or even The Deed.

Always have been referred to as a 'miss goody 2 shoes'. For part of my adult life I've been called 'scooter' because I drag my feet when I walk. Turns out that I have a rare muscle disease that makes we walk that way!

When you have nothing to say at therapy

talking about anything although I’m still in distress. Even though I’m the one who called its left...

Who needs Valium when you have lavender.

began to feel remarkably calm. Suddenly I didn't have a care in the world. I had entered...

What symptoms do you have when?

symptoms that you have when you are having anxiety? How do you feel it coming? What do you do to...

What did you have for breakfast and what does it reflect about you?

I woke up feeling like I wish I didn't have to get up, and had this existential question on my mind.

deterioration. What positive thoughts did you have or positive things did you do on the 4th of...

Pets that make us happy

What do you do or think of that makes you feel safe when you...

So much pain. What did I do to deserve this. I'm treading wa...