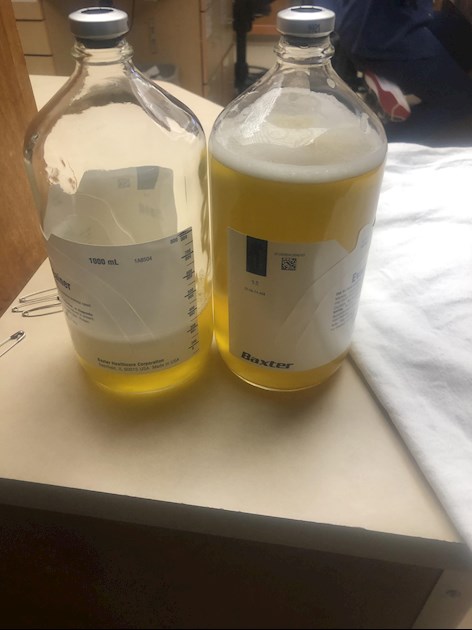 Ever wonder what fluid around the lungs looks like?! This is it!

Jeff successfully had the fluid drained.

I wanted the doctor to put the amount of fluid drained into perspective for me. I questioned if it was a lot. The doctor responded, “well, it’s not good”.

That didn’t satisfy me, so I pressed, “but in comparison to other patients … have you ever drained, say, 4 bottles?” (Each bottle holds about a quart of fluid.)

The doctor said they’ve drained 4 and even more. So while Jeff was deemed “not good”, we realized it could have been so much worse.

With the blood transfusion, drained fluid, Lasix, and continuing to wrap his legs to push the fluid up and out, Jeff should be breathing and maintaining his oxygen levels much easier now.

They would have preferred Jeff stay Tuesday night for 1 more night of observation, however they basically gave him a choice and Jeff elected to go home. He was just done with being away from home and felt reasonably well. He was finally discharged around 7:30 Tuesday night.

I’m relieved Jeff is maintaining his oxygen levels, he is actively combatting the fluid retention, and we know his heart looks mostly ok.

However, we haven’t met with anyone about the cancer in his brain. I don’t have any new information on that nor do we have any type of treatment plan in place yet.

We don’t follow up with radiology until August 18. I fail to understand the sense of urgency and find this very upsetting. I’m grateful Jeff is back home though where I know he’s comfortable.

Pancake_Lefse
To view profiles and participate in discussions please or .
Read more about...
12 Replies
•

Has anyone given you a prognosis? I know when my father had esophageal cancer he got fluid around the lungs close to the end. and had it drained with a shunt so he wasn't gasping. Also a friend of mine got fluid around his lungs toward the end with neck cancer.

Pancake_Lefse in reply to Anomalous1 year ago

No prognosis nor have they implied this is end, at least not yet anyway.

They found the fluid retention is being caused by a small blockage in a vein in his neck going to his heart, but his heart looks and sounds good.

Please do not look at this pleural effusion as a sign that cancer has advanced to the space around the lungs (pleura) . There are many causes of this condition but you have been given a reason for it. Additionally, there are two major types of drainage notably transudative( most common and most often can be related to congestive heart failure) , and exudative (often seen with pneumonia and lung cancer and other metastatic cancers). Wondering if you know what type of drainage it was? Hopefully husband’s is transudative and etiology identified!

So far the notes say:

We performed a post-thoracentesis ultrasound and found a negligible amount of pleural fluid remaining. We were able to observe lung sliding post-procedurally.”

Ah, the old doctor hedge of "Well, it's not good." While all of this is obviously horrible, I applaud your pursuit of understanding the physical reality that Jeff faces. It's a great example of gaining knowledge to help make the best choices in the future! Thank you for being Jeff's advocate! - Joe

Lulu700 in reply to SeosamhM1 year ago

So sorry to hear Jeff is struggling, but your continued questioning of the docs is exactly what’s needed to really understand what going on.

You and Jeff will be in our prayers!

I’m thinking positive thoughts for Jeff and you …… sending out a big fuzzy hug to both of you. Jeff is very lucky to have such a caring and directly involved partner . All that love and care has to uplift and support him considerably …. his rock to stand on.

Pancake_Lefse in reply to Kaliber1 year ago

So very Gross! Poor dude. I’m happy he’s home . Upsetting indeed! So serious with diabetes but he is fighting . 18th will be here quickly. I presume this is urgent? Great job to the team

Getting him home. Build him

Up anyway possible . Even just compassionate support is the best . He is loved. I Dont know any more than you do . We pray 🙏 he can miraculously improve . The Rt is to send the pc packing . Hope springs eternal . Thank God he is home . Wow . 🧐🙏

Small update on my Jeff

caused by his low oxygen stats. Jeff is currently still on oxygen. Without it his levels...

My Jeff will forever make me laugh ❤️

exited. The doors closed and Jeff and I were alone once again. Jeff turned his head and said to...

However … It appears cancer has spread to Jeff’s lungs. He has fluid and inflammation in his...

Another updat, this time from the hospital bed.

9 pain scale if I moved wrong etc. Later that night sodium dropped to 123 Noodle legs so I...

My Dad died... but not from PCa

share this news of my dad's death last night. He died in his 80th year, sleeping and oblivious to...

how do you afford Lupron and other cancer drugs…even with in...