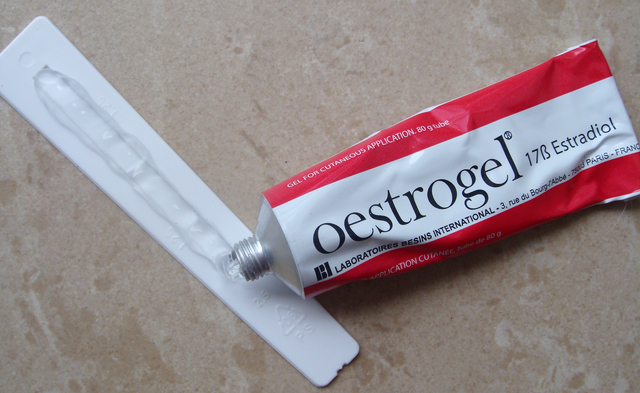 I am applying the gel about 12 hours apart which should be delivering approximately 2.5 mg of E2/day.

I am also taking a 0.5 mg capsule of Avodart every third day.

NO side effects (other than a slight bit of gynecomastia and nipple tenderness), no strength loss in the gym, no hot flashes/flushes, no fatigue, no mood swings, no change in libido (it hasn't been much to 'write home about' for a few years anyway), no cognitive loss (that I'm aware of; however, one can't loose what you never had!). IMO the gynecomastia/nipple tenderness is a small price to pay for the encouraging results so far!

ronronHU
To view profiles and participate in discussions please or .
Read more about...
16 Replies
•

Where did you get the oestragel?

I buy the gel here in Thailand (made in France) for less than $9.00 USD. One tube lasts me about a month. The advantage of the gel over the patch (at least for me) is that it is less expensive, extremely easy to use, dries in a couple of minutes, invisible, doesn't fall off, I can bathe/swim after one to three hours (I read somewhere that ~80% is absorbed within one hour) after applying, and the biggest plus is NO skin irritation.

In terms of effectiveness (as opposed to cost and convenience) does Ostragel have any benefits over alternative sources and types of estrogen?

Estrogen/estradiol can be taken orally (which can increase CV events due to the first pass metabolism of oral estrogens in the liver), injected (parenteral), or administered transdermally, i.e., the patch or gel. I believe that are all equally effective if the dosage is comparable. Oral estrogens are probably the least expensive.

I forget, what was the benefit of the oestragel over more readily available estrogens like vivelle patches?

Numbers are encouraging. Why a sacral incision?

ronronHU in reply to Hirsch4 years ago

I decided on the sacral LN excision after three LN's were identified in a 68Ga-PSMA-11 PET/CT scan. My PSA had been slowly rising over the years post-RP and my urologist/surgeon/oncologist and I were trying to delay ADT as long as possible, so when my PSA reached 1.30 we decided it was time to act. Out of eight that were removed during the surgery, five were found to be involved per the path report. Because of the reduction in my PSA from 1.30 to 0.54 I was not sorry that I chose that surgical option (I believe it bought me more time); however, in retrospect, I would try the tE2 gel regimen before surgery since obviously it did not bring my PSA down to an undetectable level. As 'Tall_Allen' had mentioned in response to one of my posts, metastases under 4 mm are most likely not going to be identified on ANY scan. The tE2 gel may have been just as effective as the surgery...perhaps even more so! Thank you for your very valid question. Ron

This issue of estrogen therapy seems to be controversial. Dr Myers was big believer, however, my current dr said he had to deal with blood clots in another former Dr. Myers patient who Dr. Myers had put on estrogen

Nalakrats has mentioned in past the dangers of estrogen levels

jdm3 in reply to podsart4 years ago

Yes. In my limited understanding of this it seems some guys are on Armidex to lower E2 and others are using estrogen patches to increase. Nalakrats made a pretty compelling argument for keeping estrogen low, but the benefits of estrogen therapy over the conventional testosterone deprivation have some positive demonstrated results. Arrgggh. So many variables and difficult to know what to do sometimes.

rococo in reply to jdm34 years ago

Whenever tthere is controversy over any drug and its timing, I think close monitoring initially is esssential till it clearly working without serious side effects. Good luck. Rocco

Oral estrogen therapy (DES) did significantly increase CV/clot risks by about 30%; however, most of the information I have read indicates that transdermal therapy greatly reduces those risks.

This is a summary paragraph from an August 2018 article in Medscape (just one of many pertaining to parenteral/transdermal estrogen therapy):

"The future of estrogen in the management of CaP remains contemporary, evolving and exciting. Parenteral estrogen delivery may offer the benefits of oral estrogens with a substantially reduced cardiovascular risk. With parenteral delivery, this risk seems to be equivalent to that associated with orchiectomy, LHRH agonists and NSAAs for patients with metastatic disease. For patients with locally-advanced disease the risk may be more than with current therapies, but substantially lower than that of oral estrogens used historically. Over the longer term, this increase in cardiovascular morbidity could be converted into a substantial cardiovascular benefit. As such, clinicians and patients might choose to accept an initially higher risk in exchange for protection against osteoporosis, andropause and a better QOL."

Joeym1040 in reply to podsart4 years ago

My understanding is that at one time they were giving estrogen injections. They did cause blood clots. Patches were better because of time release. As i mentioned before i spent

it was a triple blind study so i do no know the dose i was on.

I have been in this battle for six years (please see bio for complete treatment history).

Dr. Myers had me on Vivelle dot estrogen patches until a long plane flight, PCa, and the patches created a DVT and numerous pulmonary emboli. I had no symptoms but luckily scans for PCa picked up the PEs and landed me in hospital for 8 days! If not, would probably be dead.

ronronHU in reply to vandy694 years ago

Good morning Mark, 'jdm3', 'podsart', and everyone else,

You guys now have me in a real quandary...do I want to die of PCa, or be a 'cancer survivor' and die of something else like a myocardial infarction? Whatever, when I do expire, my daughter will apprise y'all as to what finally did me in!

"What finally did me in!" Will be the same for everyone who ever lived.... heart will stop beating....

This exchange was more than helpful throughout. Thanks, ronronHU and everybody. We’re there/here ourselves, i.e. at a crucial juncture this month of October, 2018—scheduled to begin Xgeva and to trade Vantas for 6 mo Eligard. PSA as I’ve said elsewhere of 322 and rising. I’m leaning toward estrodial gel or cream rather than Eligard partly because Les is castrate resistant and has been for many months and partly because of increasing memory loss due to Lupron/Vantas. (He’s also being weaned off Zytiga.) I’ve spent a couple hours reading to Les from HU this morning. Every time we do this we feel so much better prepared for the next appointments. Thanks again. Mrs. S

reduce my dosage of the gel since my PSA and T levels have dropped to such low levels. Actually I...

with E2 gel only and haven't seen a doctor since 7/2017. The ONLY side effect is gynecomastia (man...

reduced my gel applications by about 20% and will now reduce them even further. This gel so far is...