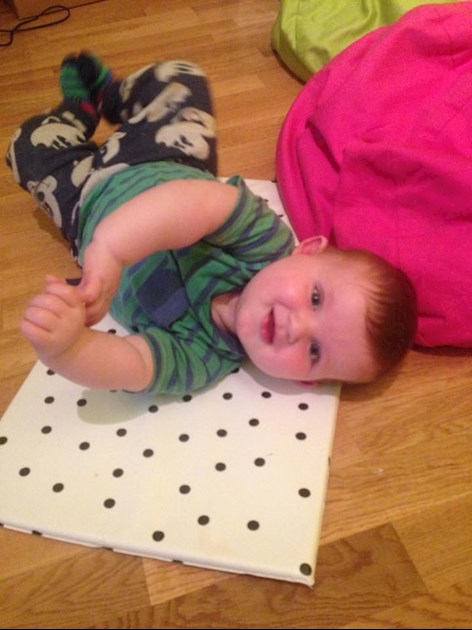 Hi everyone, well we've had another bad start to the day! Keith's hospital bed has been moved downstairs now, I've bought a baby monitor so I can keep an eye on him, well I must have been out cold this morning and didn't hear anything and guess where I found him, flat out on the floor with a bump on his forehead and a grazed, bleeding foot! He'd got out of bed and was trying to get to his clean clothes as he was very wet. I couldn't get him up so I covered him up and waited for the carers to arrive. With a struggle we managed to get him on his feet! I'm only thankful it wasn't worse, he could have dived into the corner of the table and it would have been another hospital visit!

Keith's OT has had all this new equipment delivered, a standing hoist and a wheeled commode that won't fit over our newly fitted high rise toilet! The hoist is in the garage with all the other stuff I've had to move out of the way, large coffee table, 4ft bed from Keith's bedroom (moved so we could get the hospital bed in there!) folding shower screen that we had to take out as the carers wouldn't have been able to get to Keith if he'd fallen, I suggested they hoist him out over the top but that didn't go down too well!

Sorry for moaning all the time, I'm really fed up at the minute as Keith has deteriorated fast this pass couple of weeks, we have to have four visits from carers a day now since we got CHC, unfortunately our regular carers couldn't cover the double up in the evening so we've had to have a different company to do that and I'm not keen on one of the ladies, she's actually the owner and has got a bad attitude. I'm going to have to complain and I could do without this added stress!

At least I have something to look forward to, I'm going to meet nanonthenet again, it'll be good to have a catch up!

Love the picture of your grandson, he is growing isn't he.

I really know how you are feeling. Whilst S is the best he has been for a long time, I think we are going to have to give in and get a hospital bed. I found him, half in and half out again, in the middle of the night. Two nights ago, he landed completely on the floor. Friday night, he had a coughing fit, then I was unable to get him back on the bed properly, so went to sleep with his feet hanging off the end. I knew this day would come, but it is the last thing I want to happen. Plus all the added complications, as it will involve going into another room. Where do you buy Baby monitors? Think I need a couple now.

Carry on moaning Pat, I am doing exactly the same. I didn't sign up for any of this!!!! I know I said "in sickness and in health". But I only really meant Man Flu!!!

Patriciapmr in reply to Heady

I got mine from Argos Heady, it's one of those with a camera on it, I point it at Keith's pillow so I can see that he's still in bed, didn't work this morning though did it! It is reassuring though when you're on different floors in the house, I find I manage to get off to sleep better as I can see and hear him breathing, I've got a sneaky feeling that I turned the sound down last night cos he was snoring!!!

Know what you mean about Man Flu, I often think that back then I would have run a mile if I could have seen into the future!

jzygirl in reply to Heady

Heady i still sleep in the same room as Brian and he is in a hospital bed and I'm in a single bed. Will post a picture. Baby moniters can be got on line or mothercare. Janexx

Firstly Pat never ever apologise for moaning! I do it allll the time on here!

We are all here to listen and help each other!

Omg what an awful start to the day! You could have dialled the paramedics to get Keith up but I know how it is they then start talking about going to hospital and none of us want that!

Are you able to call the district nurse at nightime for pad changes? They come to us every night anywhere from 7pm to 12am n do a pad change and make dad more comfortable. I now also call them about 5am every morning to come and repeat this otherwise dad is so uncomfortable it's not true! Really I need 4 hourly visits minimum (to be sorted soon I hope)?

All the equipment I know we've been there, such a interruption and disruption to the house!

Re the hospital bed, please ask the DN for rails to be added then Keith will have to stay put because it would be very hard to get out of bed without taking them down, just an idea.....

As for carers and attitude honestly darling take her to one side and tell her you won't tolerate attitude and you have enough to deal with without her grim face etc! She'll change after that! Everyone that's gives me s*** gets it thrown right back in their face and they quickly learn how to behave with some manners and courtesy included too

I hope that Keith is ok now and that you are too (your probably not n totally stressed) why wouldn't you be?

Enjoy your time with nannaonthenet 🍷

abirke in reply to Satt2015

Pat give that grandson of yours a nice scrunchy hug from me. Not sure if its just me getting old and the time wizzing by. But it doesn't seem five minutes since he was born.

Why is it they feel the necessity to get out of bed in the wee small hours just when no sane person should be awake.... when i did night duty it was always between 2 and 4 am that we was busy putting people back in bed. Not sure if its the brain is awake but the body isn't or vice versa.

Hope the rest of your day is better..... Janexx

I was going to suggest rails on the bed but remembered when C first had his hospital bed he tried to climb over the rails which was even more dangerous. We had a grab rail fitted at about chest level. He would grab it to help himself up but it would clank against the side of the bed and I could hear him through the monitor and once awake, see what was going on and rush into him. He can't even turn over now so things are easier in some ways, harder in others. It's always worse when new things happen, new equipment etc but you will get used to all the changes and things with settle down to the new normal, until they change again. We had the same trouble with the commode and toilet but I then found it easier for me to clean C up if the commode wasn't over the toilet.

I love the photo of your gorgeous grandson. Isn't it good we have something to smile about and be grateful for.

I hope today is treating you kindly.

Sending you a big hug.

I'm pretty sure that's not Keith in the picture...But he sure is a cutie...looks like he belongs on the floor ...or in a grandma's arms for about 2.5 seconds....

Sounds like you need a garage sale...I don't know what you call them in the UK, but all that stuff you are saving....for what? I can empathize Well most of my stuff had to be thrown away since if it had to be move it was already broken.....And what do you do with an extra bed....I have not considered this....B and I still in a queen.....I'm going to have to sell it....I have nowhere to put that thing....

I hope your evening is good! I'm just getting started ...on my way to my 2d cup and get ready for church!

my darling calm will prevail! this illness does this , unpredictability is its middle name! we have recently been awarded chc funding and were included very much in the planning, go back to them if not happy.

i have respite every three months and i know its hard to do but i could not carry on without it again chc will fund it .

with his shave, not sure I have barber qualities! I did think electric shaver? Could he feel his...

routine, as we haven't had one in months.

The hardest decision of my life😔

this any more! I had to use the standing hoist on my own last night, Keith had gone to bed early as...

breathes out and some time he seems to hold his breathe when making this noise it's quite scary we...

Thought it was too good to be true!

were concerned about him, he wasn't responding to them, they couldn't get him into bed as he was...

WHAT'S the difference between CBD & PSP?