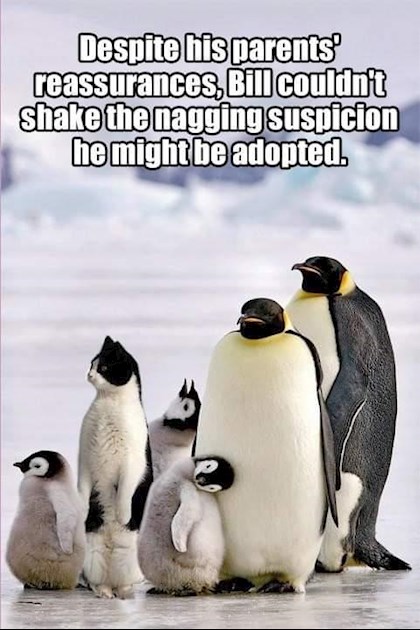 A piece of black tarmac and a piece of pink tarmac are having a drink in a pub. Suddenly there's a commotion as piece of green tarmac kicks the doors open, storms up to the bar, helps himself to a pint, smashes the empty glass against the wall and storms out again, deliberately knocking over three tables on the way.

"You're not gonna let him get away with that, are you?", the black tarmac asks the landlord.

I spotted an albino dalmatian yesterday.

It was the very least I could do.

Had a massive row with my boss the other day.

Just one of the benefits of working at the boating lake

A Spanish woman has given birth to identical twin boys named Juan and Amal.

She told journalists I only carry one photo of the babies because if you've seen Juan, you've seen Amal"

I went to our local Chinese restaurant last night and got chatting to the waiter. He told me he lived in Japan during the war and was a Kamikaze pilot. Because he was Chinese he was given the Call Sign 'Chow Mein'.

I said 'Correct me if I'm wrong, but didn't Kamikaze pilots sacrifice their own lives?' To which he replied -

'I was Chicken Chow Mein'

I used to have a fear of chestnut trees.

But then I conquered it.

A beginner's guide to chromosomes:

Grandson Frank asked " Grandad where does poo come from?"

To make it simple I just said.

"You just had breakfast?"

" well the food goes into your mouth down into your tummy. Then your body takes all the good stuff it needs out of the food, and then what's left goes down to your bottom and when you go to the toilet it comes out as poo".

He looked completely confused and stared at me in stunned silence for a few seconds.

Then he asked " And what about Piglet"🙉

Bazzak
Reading Rabbits
To view profiles and participate in discussions please or .
32 Replies
•
2 years ago

They made me chuckle 😀

How do you communicate with a fish?

Drop it a line🐟

😄😄😄Could apply to the M1 and Sheff Utd fans as wellxx

These are hilarious and love the photoshop picture. 😁😁

Thank you Barry my mate! 🙃

Thank you for cheering us all up, it is raining here heavily, by the weather forecast we will have a week of rain. Saying that, you will be in much demand keeping us all amused hopefully.😉

The penguin family is brilliant, I just love it.

Poor Frank, you did well Barry with your answer.

Wishing you and your family a safe passage through these very difficult times, Tim.

That picture is great Bazzak. 👍😁

As awful as ever Bazzak! Love ‘em and love the penguins too! 😁

😂😂😂 I can't stop laughing now. They are the best ones yet. You are the best tonic ever. I was wondering where you had gone. Obviously writing your latest book of jokes😂. Fantastic. Keep them coming please. The picture is absolutely brilliant.

Bazzak, you do make me laugh😂😂

Love em and Love the Photo. Bill is so cute, so are the Penguins 👍

Had a good giggle reading your jokes.

You make a better job than Laughing gas.

Certainly a good tonic. You do make me laugh. Thankyou Bazzak. 😂😁 xx

Thank you darling, hope thiings are not too bad for you, always here if you need a chat, and you also have a very good friend in Lynne she would/will be there for you always!. ( and me also xx)💕💕💕xxx

Hello Glo is it just Healthunlocked or anybody?. If you send a msg to her private email does she receive it it ? 💕💕xx

Hi Bazzak, it's all sorted out for now. If I sent a message to her private Email she wasn't getting it. She couldn't send one to me either. Lynne just messaged me and said that Jerry told her , that because she was so polite , she was classed as a Spam .I didn't even know what a spam was until I looked it up.

Sometimes you just can't win. I used to be on the Fibromyalgia Forum until some Stupid Admin accused me of swearing , because I used the word hell. I was trying to explain the pain I was in and I said that I hurt like hell. Then he accused me of shouting and trying to cause trouble because sometimes I used CAPITAL Letters. I thought it was a woman that I was having the disagreement with. But it wasn't Hahaha. It was a Man..He more or less threatened me about having me removed from the Fibro Forum. But I didn't give him the chance. I finished with them 1st. It was a shame really, because I made a lot of Friends on there ,and because I've got Fibromyalgia they all helped me a lot and I helped them..

Glad it's all sorted Glo, I'm sure you are a lady who can stand up for herself and there's nothing wrong in that. You stay safe and love to all.😘😘💕💕

Thanks Bazzak, Things are little easier now that we know our Princess Ava 👸 is doing okay. Fingers crossed now for John 🤞 Then perhaps for me 🤞.

I know that I've got a good Friend in Lynne. Hopefully she's coming here to visit us next year. Can't wait to meet my Lovely online Friend

I know that we're not supposed to give our proper names and addresses out to each other .But Lynne and I seem different. We have sent each other cards etc for a while now. Trish and I have exchanged addresses as well. I've had some lovely cards and messages from her. But she's been a bit quiet of late though. I'm gonna ask Lynne if she's heard from her. I can't talk much on the phone , because of my breathing..

But our Lynne can make it up for me.

Love to you both, and you families.❤❤x

Thankyou Bazzak. Love to you and Sue as well. 💕💕💞.xx

OMG thank you for those jokes

, especially the tarmac, and poo-h ones. LOL

Complete happiness 💕 and some BAD jokes 🙂

I saw Elkie Brooks walking her dog yesterday. I asked if I could guess it's name. She agreed, but...

Ok some bad jokes, I apologise in advance 😁😊

Well,what was that all about?