Pleura effusion : Morning all, I’ve got a pleural... - My Ovacome

I’ve got a pleural effusion on my right lung. It was partially drained on Thursday via pleura tap and I’ll go again Monday to drain more. In a week or so I’m due to start weekly taxol with bevacizumab every 2 weeks. Has anyone had a similar issue? Did the chemo slow down/stop the effusion ? What’s it like with a permanent drain? Has anyone had the talc procedure? So disappointing as I was really active but a lung cavity full of fluid really slows you down! Thank you , Charlotte 😘 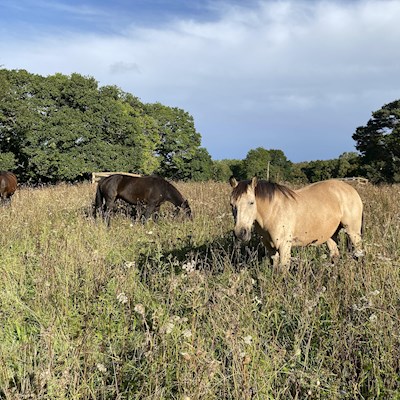 Horsesrock
To view profiles and participate in discussions please or .
Read more about...
19 Replies
•

Hi Charlotte Yes I had pe in 2020 and ended up with IPC drains on both sides. Tbh I felt so much better and had better oxygen sats once this was done… so I didn’t mind. The job of draining them was devolved to me once the nurses taught me how to do it. I found that draining slowly stopped any pain or light headed feeling. My pleural effusion did dry up, it took a little while but I have been drain free for more than a year now xx

Horsesrock in reply to Lyndy

Thanks Lyndy , good to know! I presume you didn’t have the talc - sounds pretty revolting to me. I’ve realised I need to stay on top of the fluid rather than soldier on. All the best to you - you are having quite the journey - seems to be my path too. Charlotte x

Lyndy in reply to Horsesrock

Hiya. I had the rocket drain put in a few weeks ago. Op defo wasnt pleasant & I still feel discomfort, but I can breath much better now & it is much less stressful to drain myself than go through the version you get at hospital (with anaesthetic & tube insertion etc). There’s no pain if you do it slowly as Lyndy says. Im on caelyx/carboplatin for 1st recurrence & my ascites (my right lung was full of it) seems to have now largely dried up after my 2nd chemo (slightly annoyingly straight after the drain was put in).

Thanks very much Erin - that’s really good to know. I might try to hang on before getting drain put in in case my fluid also drys up with chemo. The tap was ok - bit of pain the following day but I live super close to the hospital and respiratory team are very nice and efficient.

I had pleural effusion on one side which signalled my third recurrence in 6.5 years. Had it drained twice before carbo/gemcitabine started, chemo has stopped the fluid from coming back. On my 7th month of chemo, will be finished soon, then back to Olaparib. I'm HGSE 3C OC BRCA1 somatic HRD+. 💗💗💗💗💗💗💗

Thanks Tesla! Hopefully I’ll be the same. I’ve only just been through 1st line , Platinum resistant so moving straight onto second line - taxol and Bevacizamab. It’s been a tough year! Good luck ! 😘😘

FYI, my oncologist tells me that taxol/bevacizumab is a very powerful combo! Hugs to you. 💗💗💗

delia2 in reply to Tesla_7US

Tesla, I am interested in your going back on Olaparib. I take it you were on it then had a recurrence?

Tesla_7US in reply to delia2

yes, I've been back on carbo/gemcitabine for 7 months and it's working. Probably going back on a PARP again. Maybe looking to join. a Novobiocin trial.

Hi Charlotte I had pleural effusion it was how first recurrence presented itself. Iwas admitted to hospital and Over 3 litres of fluid over 5 days was drained off. Next two weeks I underwent x rays, CT scans and finally PET scan whefe the cancer mets showed up and also that my lung had filled up again. I guessed straightaway that my OC diagnosed in 2002 was back but had to wait for results of biopsy meanwhile I had the talc procedure. It was fine it was done on the ward and afterwards I was asked to roll from side to side to sort of spread it around, sounds a bit basic, I then had an x ray to see that all was ok. Then obviously I was diagnosed officially and started chemo. For me the procedure has caused absolutely no problems. I did have two brilliant doctors who looked after me in hospital, explained everything and were very gentle and kind. No pain at all.

Thanks Lizzieanne, Good to know if they think that’s the best option for me. I think the team in Edinburgh are good. My mother had the talc procedure for her mesothelioma and had an awful experience that then didn’t work (country hospital) - it has put me off!

Can well understand that. The two drs who had cared for me for two separate weeks and I trusted them and they were very reassuring but when you have seen the opposite it wld make me scared. Have read on here that chemo also does a good job of clearing this up. Wish you well with whatever you decide x

Hi there, I had pleural effusion in my right lung in September when I was diagnosed with OC. I had it drained in hospital and then had the talc procedure which all worked well and was pretty painless. I then started first line carbo/taxol chemo and recent X-ray shows no more fluid accumulated. So it was pretty successful for me as it was a severe PE and I could hardly walk I was so breathless. The respiratory team were excellent with me. Hope this is helpful and that you respond well to treatment.

Thank you ! It’s so good to hear another positive story. Best of luck with your treatment. X

Hi... my wife had a similar issue of pleural effusion some two years ago. What started off as a miniscule drop in her Pet CT ended up in both lungs over time and tapping had to be done thrice. Initially when it was a miniscule drop, oral tabs were administered but didn't work out and so six cycles of Gamatecibine were given. DIDN'T WORK. So, another six cycles of Paclitaxel with Bevaxuzimab were given and that did the trick . We.didnt opt for talc as it has other complications and weere advised it as a last resort. Thankfully it wasn't required . Stay Strong and Keep The Faith. Naimish

Horsesrock in reply to Naimish

Thanks Naimish, my PE filled up almost as fast as they tapped it so will go for the drain. I should be starting Taxol/bevacizamab imminently so I hope that does the trick , like it did for your wife. Do you mind me asking when your wife started the T/B? And is she still on the bevacizamab ? I was only diagnosed in March and already feel like I’m running out of treatment options. I’m doing the cancer diet and taking supplements but struggling to stay positive at the moment. All the best especially to your wife. X

Naimish in reply to Horsesrock

Hi, her Pacli Bevaxuzimab combo was started two months after the Gematicibine chemo and pleural effusion issue has become a thing of the past, for now at least. She has a bigger issue now than pleural effusion, the entry to her stomach has been affected with cancer and is unable to eat well. She is now down to 39 kgs from 52 . Otherwise her CBC reports are great with all her organs in perfect condition . Pray the metastasis

She is now on oral Rucaparib since last three days . Hopefully this slows down the growth. She is slowly regaining her energy levels after stopping the chemo regime of just Bevaxuzimab. Her CA 125 is a good indicator and she is presently 42 . We need to wait for three months to know more of the effects of Rucaparib. I was trying to tell the Onco that multiple chemo have drained her energy and body BUT he felt that I'm trying to teach him his job. I left it at that. Bests for your procedure Naimish

wondering if anyone out there has had a pleural effusion and had it drained and a pleurodesis done....

pleurex catheter inserted for pleural effusion drainage? I have been drained three times and need...

having a catheter drainage tube put in for a pleural effusion. also, while they do this they will...

on the liver's line and in the pleural effusion (which they later drained). She then had 6 rounds...

What were your first symptoms?

CTC circulating tumor cell test - do people do this?