Can't seem to quite get my Lupus under control. - LUPUS UK 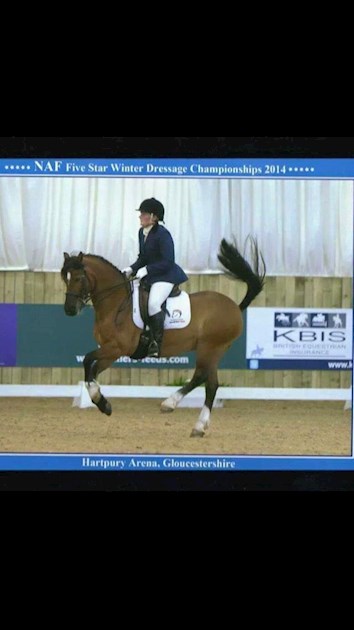 It took me 7.5 yrs to get my lupus diagnosed, which finally happened last October. However it started to get a lot worse last August, that was when the chest pain started. My first rheumatologist wasn't much help although he did start me on Hydroxychloroquine 400mg a day, this helped a little.

I'm a dressage rider so need to be out and about doing the horses every day. My rheumatologist wasn't interested in that at all and was no help, so I asked to be refered to Guy's hospital Lupus unit. They have been great and have listened to everything and really tried to help. However it's still not under control. They have said I have mild lupus as in no internal organs are involved but my skin and muscles are. I know that is good news, but not when you ride to a high level. For me it's devastating, my left hand and leg are getting weaker and I'm in quite a lot of pain my left hip and leg! I struggle to hold the reins and my left leg doesn't always do what I think it's doing (strength wise).

Last appointment I had at the end of July I was really struggling to walk as my hip was so bad. I was given an injection of 125mgs of Depomedron and said to up my Hydroxychloroquine back to 400mg a day as it had been lower in March. Injection was meant to last 3-4 months. It lasted 3 weeks 😔. I had to go to the Dr and get a course of steriods for 14 days. 😐 I just feel like it's never ending.

It sounds to me as though you may need another drug such as methotrexate adding in. I was diagnosed with RA five years ago and couldn't work (I'm an artist) or write or drive - sometimes had to navigate studio steps on my bum when knees were bad. After a few years on methotrexate and Hydroxy together, all my RA symptoms went away and have never returned until recently - despite having taken no DMARDs properly for a few years . Now it seems I may have had Sjogren's as my primary disease all along.

It might be worth asking your rheumy if you could try Methotrexate for your arthritis because it really can be so effective. I was much more active and focused for the time that I was on it with Hydroxy - but it did make me very sick/ nauseous finally. But I'm unusually sensitive to side effects. Not on anything now and slowly but surely I'm struggling again.

Nikki246 in reply to Hidden

They say that my inflammatory bloods are clear and that I don't have RA. I'm on 30mg of Amitriptyline a night as well and it's not helped much. I also take 30mg of Co-codamol 4 times a day. They have xrayed my joints and said they are ok. Bursitis of my hip was mentioned but not sure. The steriod injection was ment to work but didn't neither are the tablets.

I'm away next weekend at a dressage championship and I'm dreading it, sleeping in the lorry and not getting much rest!

I have been told to go for Para qualification, but I know that Lupus is hard to gauge so not sure how it will go. 😟

Hidden in reply to Nikki246

Possible Costochondritis - I get this and it's common with Lupus and RA. Your inflammatory bloods don't always show inflammation even when it's there. Some people don't but the disease can still be active. The trouble with Lupus and Ra regarding Para is that they make us feel ill because they are systemic diseases rather than quantifiable disabilities. Best of luck whatever.

Ps Methotrexate is used for Lupus too.

Nikki246 in reply to Hidden

Thank you. Methotrexate and Azathioprine have both been suggested as a possible. Just got to try 5mg a day of Prednisolone for a month first. If it works then they will leave me on it, (Will have to have bone density test, before I stay on it for good).

Sorry to read of your health problems , must make riding so hard which is such a shame as you must love it.

As you say the steroids and injection haven't helped your joint pain then it's possible it's not inflammation causing it but Fibro which is treated by painkillers in a different way. I also agree that Hydroxy might need to be changed to Methotrexate which is good for the Arthrits.

To know if you've hip bursitis is can you put your finger on the painful spot down the side of your thigh?. If so then it's bursitis which can be extremely painful and treated with an injection. I've had local anaesthetic ones into the spot which has been really helpful. In the past I've had steroid ones which have also worked but you couldn't have one as you've just had the Depo one!.

I've just had a steroid injection for nerve pain and it's only lasted three weeks like you, so disappointed I've felt. Wanted months relief badly!.

Did you enjoy seeing the showjumping at Rio and Our success overall?. Hope you get more help soon. Are you due to see your Rheumy?. X

Barnclown in reply to Nikki246

Nikki246 in reply to Barnclown

It went really well thank you. We were 9th out of 22 which doesn't sound brilliant but we have only just started at this level and were against some that are also at the level above.

I went back to see the Lupus nurse last Thursday and they have decided to put me on 5mg of prednisolone a day for a month and see how it goes. If that doesn't help then I can try either Azathioprine or Methotrexate. Hopefully the steroids will work.

Barnclown in reply to Nikki246

YES‼️👍 V glad for you on both counts: in competition & at clinic

I suffer in a similar way myself with joints, muscles and chest pain. Recently a doctor suggested my chest pains were actually to do with my stomach and after 2 months on omeprazol and no further chest pains he may be right. If you also suffer with digestive discomfort this could be the same for you....

Hope this finds you on a good day.

My rheumy was also reluctant to give me stronger meds because I do not have organ involvement or joint swelling, but muscle and joint pain, fatigue. Still, I had a lot of pain and every day was a struggle just to get through the work day. My wonderful GP advocated for me and told my rheumy I was struggling and finally he agreed to me on azathioprine. It gave me some relief but affected my liver so eventually I was switched to mycophenolate and much of my lupus-related pains are now gone. Try telling your rheumy you feel your quality of life is being greatly affected and you wish to try some additional medication. For the weakness, you can ask for a referral to physiotherapy. I also got weaker over the 2 or 3 years that my rheumy didn't have me on stronger meds and still and trying to regain strength now.

Sorry I came late to your thread, nikki. LOVE your photo 👏👏👏👏

Am glad you've got great replies.

Maybe you've already read details of the treatment process I've been through since my infant onset lupus diagnosis was recovered 5+ years ago in my late 50s. So I'll just add a few details, for what they're worth 😉

I too was into riding in a big way & had ponies + horses...this was THE GREAT LOVE of my life from when I was tiny. I had to give it all up by my 20s for various reasons...but several years ago my brill rheumy added daily mycophenolate to my combined therapy treatment plan, AND to my amazement myco worked wonders:

-on myco I v quickly became consistently free of the chronic pain & stiffness in hips + lower spine (all sacral joints + lumbar joints) which had been making my life a misery for decades and had never responded positively to any prescription NSAIDs & analgesics + had only responded positively briefly to injection/blocks + only been partially numbed up by bilateral facet joint denervation ops (2 sets several years apart). things gradually became so good within a few months that I actually nearly got on a horse again (sadly I couldn't after all, but that's another story)

For various reasons I've had to add low dose pred to my daily cocktail, but this wasn't due to returning loss of muscle strength, stiffness & joint pain (myco really does continue to do wonders for me in those areas)

Am hoping for more photos: PLEASE 🤗

Does lupus get worse?

but manage day to day, however I am really struggling now walking downstairs hurts my legs my...

Vision issues and getting quite worried

to stop the hydroxychloroquine for 7 days because i am having vision issues with my left eye. i have

Can't be Lupus says GP...well what then?

but it's just shrugged off. I keep getting a spasm and pain in my leg too. Mouth ulcers/cold sores...

Can't seem to handle stress/shock. Is this caused by lupus, steroids or both?

My struggle with Lupus

BeverleySamson and I have had Lupus a long time now in the early days of having lupus I spent most...

For Stormy and Misty and anybody else feeling poorly at pres...

The difference between my local rheumy and the centre of exc...

He will send me Lupy!