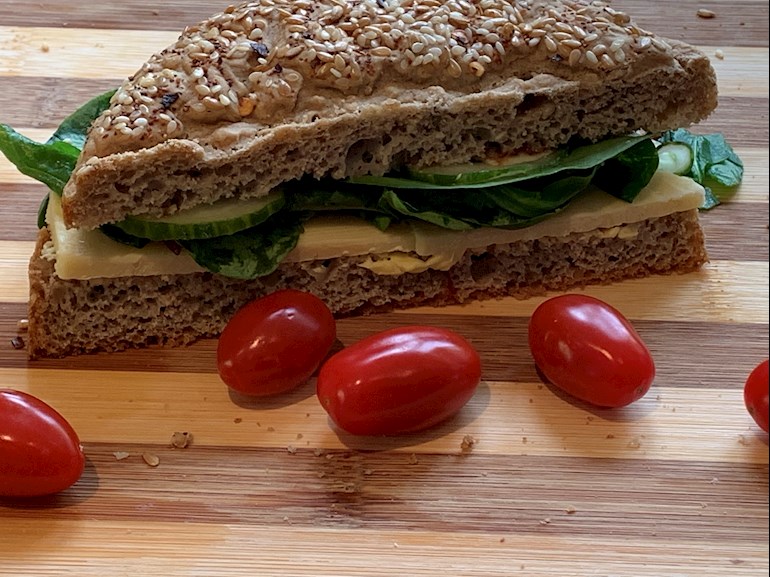 Here's what I had for lunch today its home made brown gluten free bread made with a mix of buckwheat flour and a GF brown bread mix with pumpkin seeds sesame seeds and golden linseeds, I had it with strong cheddar cheese mixed bistro salad cucumber yeast extract and some mayo. The photo shows the texture of the bread.

I hope everyone is enjoying their weekend and instead of it being flaming June here in the UK its more flaming awful...😊

What delicious homemade bread Jerry, it is an art making gluten free bread, mine tend to be gluten free bricks 😁 its been rather wintery here, suns making an appearance now

Thank you Debs, thats a shame Debs I'm sure that you could bake GF bread successfully I used to make rolls first as they're smaller and rise easier. 😊

The bread looks great! It's a fantastic idea for a lunch.

Thanks for posting it.

Aw thanks Zest, thats a great compliment and I enjoyed it, the baby plum tomatoes are very tasty too. 😊

I've made quite a few loaves following your recipe now and they've all been simple to make and light and yummy to eat. I don't eat much bread but when I do, you can't beat your home made version. I've tried the supermarket types and they've usually made me feel quite ill afterwards, but I never get any problems with this bread. Even my non gluten avoiding husband and daughter like it 😊

Hey that's great MTC so thanks for saying this and I'm glad that they're easy and work, there's something about fresh home made bread as well. 😊

Home made gluten free garlic and herb bread filled with salad for lunch.

Hereford hop cheese salad, with salad sandwiches I love the combination of yeast extract with mayo...

with sesame pumpkin and golden linseeds.

I had it with some very strong farmhouse cheese with...

Here's a nice simple and healthy lunch that I had today, its a home made GF bread roll...

finished. The photo shows the texture of the bread which's made with GF bread flour and ground red...

I think that baking your own bread is...

What is your favourite breakfast?