With the NHS funding crisis should gluten f... - Healthy Eating 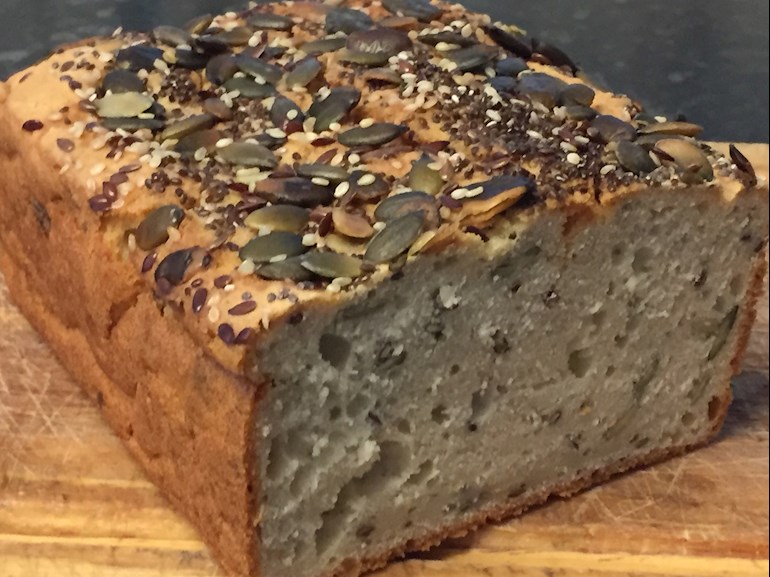 Funding for the NHS was on the news again this morning and I think that we in the UK are very fortunate having the NHS and I think that it's also up to 'us' its recipients to use it wisely rather than taking it for granted.

I chose to bake my own and I use naturally gf flours like quinoa flour and I add sesame seeds, sunflower seeds, pumpkin seeds, chia seeds and linseeds. So my bread packs a nutritional punch and I'm not reliant on the NHS for my daily bread.

Part of the problem is how medications have to be stored and transported and the pharmacist gets a fee of around £1.00 for dispensing it so should we be able to get things on prescription that are so costly to the NHS compared to buying them as an individual?

And I know what I feel as to me the NHS is well worth protecting.

Here's a photo of some of my bread and this is my solution to the NHS being ripped off over gluten free foods. 😊

Once upon a time you got more Supplementary Benefit if a doctor confirmed you needed a gluten free diet and I benefitted from this - that was more useful (and healthy) than prescriptions for me.

The prescription charge bears no relation to the cost to the NHS of the prescribed items... it might be very much less or it might be much, much, much more.

That said, your point remains valid that the NHS does not always get a good deal compared with what users can secure for themselves.

I don’t know enough about this to comment but I have to say that bread looks fab. Well done for making your own. I assumed you had taken a stock picture from some where. Haha! I should have known better 🤣 👨‍🍳

GF prescriptions have become a bit of a scapegoat in the whole "funding crisis" debate. It's a smokescreen to hide from bigger issues, like drug companies over-charging.

GF prescriptions cost the NHS way more than they should, but I think there could be solutions that would still allow people their food, while reducing costs to the NHS (like coupons)

in reply to Cooper275 years ago

Hi Cooper27, I agree that there are better ways to support those with special needs, like CD.

I personally don't see codex wheat as healthy as its so processed it has to be fortified so I think there are better healthier alternatives and this should be looked at rather than just cost's to the NHS.

Cooper27Administrator in reply to 5 years ago

Sorry, I don't know what codex wheat is... Is that where they remove the gluten? My OH is the coeliac in our household, I know he hates the use of "gluten removed" ingredients, as they do upset his stomach in certain circumstances, and he was a bit annoyed to find them in his GF juvela mixes (that's an argument for coupons if ever there was one, because at least you can read ingredients in store!)

In all fairness, he's been diagnosed 10 months, and we've used the prescription twice, so I know we could manage without. I just see the whole debate as a distraction. People don't understand coeliac, and just see it as faddy dieters wasting NHS funding. The NHS knows they can draw on the eye rollers to drum up public support.

in reply to Cooper275 years ago

Hi Cooper27, Juvela is codex wheat, its wheat thats rendered gf or below codex 20ppm. I sympathise with your OH and I see these foods as having an allowed level of gluten. I've been diagnosed well over 20 years and eat naturally gf foods and cooked from scratch.

So if your OH is sensitive to low levels of gluten you need to know that wheat derivatives do not have to be labelled as such, so artificial sugars like dextrose and maltodextrin can contain traces of gluten which upsets some coeliac. Caramel colour and acetic acid can all be wheat derivatives so its minefield if your'e super sensitive.

Here's a link to CSA the coeliac society of Australia as they have stricter standards than in the EU so they have none of the forbidden grains and all wheat derivatives have to be labelled as just that.

We have a hg topic section on here and any other issues you have about your OH then please just ask away.

This topic does come up lately. Thanks, Jerry.

Someone/posters commented on NHS wasting too much money, haemorrhaging a large sum of funds on useless the IT system which never worked well, delaying giving a diagnosis/treatments (and costs more once things get out of hand, e.g. advanced stage, bigger operations, longer, more costly and heavier treatments), patients having had to see several doctors/repeated tests to get to the diagnosis, costing billions. That was on another hub.

Someone else also said that one NHS trust built (wasted) a billion pound maternity building to "gross over" the death of newborn babies in the North of England. According to the locals, the building was perfectly nice, but the training was at fault. But the trust decided to build it to change/clean up its image with a new building, which cost billions. They could have spent the money lying around for providing the decent training. NHS probably waste a lot of money in small, medium and larger scales in so many ways than one up and down the country.

People ought to get these managers accountable instead of letting these incompetent managers earn a very high salary and benefits (pensions, discounted private healthcare etc) that go with the job that they do not deserve at all. They can't expect people to pay more tax to fill the black hole they created as a result of their own fault.

in reply to 5 years ago

Thanks anothermeber, It's not just gf its over the counter painkillers and its astronomical cost to the NHS this is what I know is wrong.

Social media gives 'us' the opportunity to speak out about how unfair things are and by highlighting what affects us we can hopefully guide things for the future. So thanks for your input.

sadly we also have the problem that a lot of people will rinse the NHS for every penny wherever they can: I regularly see people sharing the 'secret' of the minor ailments scheme on social media and dozens of people who are in no financial hardship whatsoever, gleefully leaping at the chance to get Calpol and sudocrem for free...

On separate, but somewhat connected note, why is it that a GF loaf should cost £2.80 against 50p for a regular wheat loaf?

Hi Rignold, You make a very valid pint here that some people take advantage of the NHS and its up to us to speak out.

Now I hope this doesn't put you off your tea LOL. The £2.80 loaf is made with wheat that has been washed repeatedly in solvents to remove the bulk of the gluten and then it has to be fortified. If you toast it and it burns its fizzes and bubbles...🤢

So is it any wonder I do all my own baking...

So you eat Ezekiel bread, I reckon thats brilliant as its in another league, so good for you.

well it tastes ike crap and you need to take out a second mortgage to buy it so it is as well that you get to feel worthy about it.

Am not eating it at the moent though, because carbs.

You're quite right happycook we need nourishment...😊

This is a very interesting post Jerry. I do agree with Cooper. I believe one of the main issues is the drug companies or medical maffia as Dr Coleman labelled them.

My main concern is for people on a low budget not being able to get GF food.

Even though Gluten makes me very poorly, I could never get a prescription - not that I am concerned with that, the less i have to do with the doctors the better : >

Hi Rignold, the gf and baby food prescription plus many more are controlled by this company who produce the codex wheat.

Is that part of Big Pharma?

They're a large company that has a monopoly in the EU/Scandinavia gf, baby products and specialist foods. So they're the food equivalent of the Pharma co's.

I wasn't saying that. I'm concerned with people who can't afford to eat GF foods, hence making them really ill. I do have a massive problem with the medical companies., but them controlling GF prescription I don't know about

in reply to Kitten-whiskers5 years ago

You're so right about the big Pharma co's because they control what can and cannot be prescribed as their rules stop generic med's from developing countries from being available in developed countries and at a massive cost to our society.

You're also right that those who cannot afford basic's should be protected and supported by society.

Naturally gf food is much healthier than substitute foods and I don't see not getting bread on prescription as detrimental to a coeliac health.

You've a social conscience and I like that so good for you. 😊

Kitten-whiskersAdministrator in reply to 5 years ago

I used to work for the NHS prescribing gluten free stuff.. people would take the pee ordering 22 loads of bread at once! Ordering tons of food for the whole family who didn’t need the food!

It surprises me that people need to order prescriptions for large quantities of GF bread. I very rarely eat bread these days and if I needed to be GF I could certainly live without bread products quite happily.

a large loaf of gf bread and 4 fruit bread buns, what I do is put the bread dough for the loaf in a...
•3 years ago
12 Replies

it up in a loaf tin added more pumpkin seeds and some sesame seeds to top it. Sesame seeds are a...
•1 year ago
17 Replies

they ground sesame seeds and added them to bread so I've been trying that and it helps the bread...
•3 years ago
13 Replies