A one pot dinner for tonight: Here is my one... - Healthy Eating 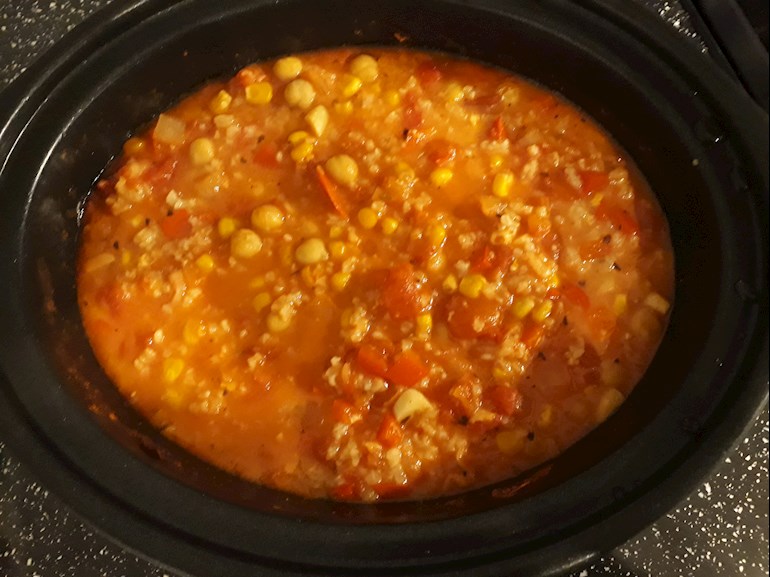 Here is my one pot dinner for tonight which is a Vegetarian Southwest One-Pot Dinner and here is the link to the recipe below. I have had a taste whilst it's been cooking and tastes rather good. I used under half of the amount of chilli and it's still hot so I have added coconut milk.

I used a red pepper rather than a green one and used chickpeas instead of dried black eye peas.

I am going to look at the recipe later.

It was really nice but would have been better had I reduced the chilli powder even more; I used about half of what they said but next time I will use a quarter; I like heat but not that much. Also I used risotto rice as that's what I had in the cupboard but to be honest it would be much better not to cook the rice first and to just put it in the pot with the rest of the ingredients at the beginning, just to put the cheese in at the end.

Hi Alicia, yours looks lovely and much nicer than the one in the recipe. So I'm impressed and sure that you'll enjoy it. 😊

Ah thank you Jerry. As I said to Zest above the recipe needs a little adjustment i.e. even less chilli (I halved the amount and it was still too much) and to put the rice in at the beginning if using risotto rice.

It was tasty Mel, jut a little adjustment as I have said to Zest and Jerry and the recipe will just about be there. I will definitely make it again.

Hi everyone. For tonight’s dinner, I had a [b]baked potato, green beans, gluten free fish sticks,...

Hi everyone, This is what I had tonight for dinner. It’s made with broccoli 🥦 florets, triple...

found the recipe in a magazine and it also has butternut squash, garlic, chillies (I only used one...
•
6 Replies

Cruelty to fruit and vegetables?

Dessert for the week.