This is a long winded one. I’ve had an insane few days. I’m currently 5 weeks 4 days. Sunday morning brought spotting and fears. It stopped. Then my boobs that have been persistently sore since transfer started to lose sensitivity. Monday (yesterday) the bad cramps began at work, dizziness and sweats came and my boobs lost all sensation. I spent all morning crying. I booked an early scan at an EPU (Oxford one are fab, if you’re had a previous ectopic you can pretty much get a reassurance scan at any early point) for the followings at then wondered if I was overreacting. This morning my boobs felt nothing, literally nothing. It was scary. Till I went to the toilet at work at today and saw what i can only describe as a significant bleed. I knew it was over but went to my EPU scan today in tears. Turns out I have two gestational sacs with yolk sacs. Measure on track but too early for a heartbeat. Going back next week. Literally no idea what to think. So terrified. I’m looking at this little picture so in love with my twins but also thinking why all the blood? Where are my boobs gone? This must be bad. EPU said no way to tell at this stage. Could just be bleeding because it’s twins, could be the start of something worse. I really don’t know what to think. I don’t want to write them off but I don’t want to be too hopeful x 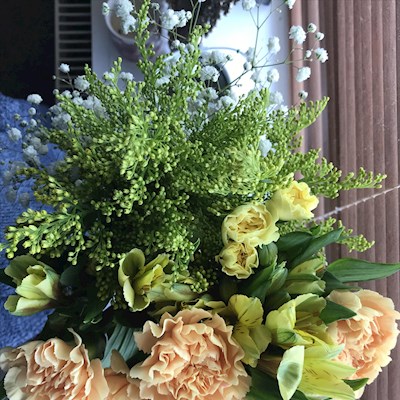 Maryc32
To view profiles and participate in discussions please or .
13 Replies
•

Firstly congratulations on your pregnancy and twins. I just wanted to reach out and say I will be rooting and praying that your next scan goes well and you hear their heartbeats! 🙏🏾

Maryc32 in reply to JoyfulStar

I’m holding hope for you. It sounds like a very anxious time, I’m sorry you’re going through that, but praying it all works out in the end (nothing to think it won’t at this stage) x

Maryc32 in reply to Patches86

Thank you patches. I’m very anxious indeed. Caught on a yo-yo of hoping then preparing for the worst. I hope things are well for you xx

I've just had twins & had some bleeding on and off up until around 14wks. My friend also had intermittent bleeding so it seems fairly common with twins and can be caused by implantation and sometimes a subchorionic haematoma. Wishing you all the best, hope it's ok for you!!xx

Maryc32 in reply to Cinderella5

Thanks Cinderella. That helps, it’s so hard to stay sane when when the symptoms of miscarriage are similar to those of pregnancy. I’m a bit on a yo yo of hoping then despairing. And even though two doctors told me to ignore what I thought my boobs were telling me I can’t help poking and hoping for pain to come back 🙈

Cinderella5 in reply to Maryc32

It is very difficult to stay sane when you are terrified. Try to take it easy when you can and hopefully your next scan will be more reassuring!!🤞🏻Oh and btw my boobs disappeared too and didn't really become more painful again....I really had no pregnancy symptoms at all.xxx

Can they do serial bloods HCG? Hope everything works out ok, could just be implantation bleeding xx

Maryc32 in reply to katiehopeful81

No I thought they were going to but didn’t, my fertility clinic don’t do betas and the EPU said they would see more from the scan. I’ve just got to sit tight I think xx

Congratulations on your pregnancy. I too am pregnant with twins and had bleed it wasn't so early as yours so i guess that could be even more scary. I started my bleeding at 12 weeks first a massive amount. Then i have been spotting ever since up till this week . I am 17 weeks. I havnt spotted two days now so happy its stop for now. But dont worry i am sure everything is ok. Good luck

Maryc32 in reply to Mellyboo111

Hi Maryc32, I am so sorry you are going through this! I will pray for you and your twins❤️❤️

Maryc32 in reply to Babyinmind

Thank you so much ❤️

that I have a demised twin.

any spotting or bleeding is a good or bad thing

had a bleed at 5weeks + 3 on Tuesday, went to EPU, they found two happy gestational sacks and yolk...

week at the EPU, we’ve had our clinic scan today and the empty sac is now a second twin! Both...

frozen cycle. I have just had an early scan at 7 weeks and it is twins. Am so in shock. Our story...