Walking in the chilly sunshine: didn't feel like... - Couch to 5K 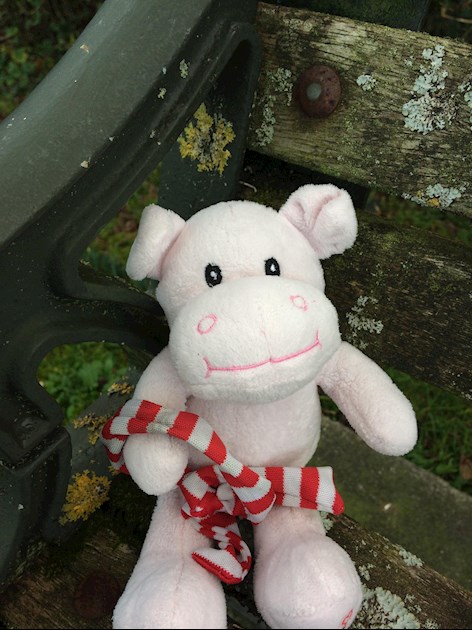 didn't feel like running but I still moved my backside off the sofa and out for a walk in the cold air but nice sunshine. Had a great walk, took some photos I'm pleased with, did a total of 8.09k, which shows how far you can go when you're having a nice time.

On top of reuniting the Hippo of Randomness with their scarf (i took a pair of scissors and managed to cut it free - it's in the washing machine, it was dirtier than Hippo because it'd been out longer) I also found a fairly awesome keychain which is a bit rusted but I can replaced the rusted hoop which I have christened 'BatDog!' and once I've cleaned it up and replaced the actual ring of the keyring, I intend to gift it to my beloved MrPsycho to put on his backpack ^_^

All in all, a nice day. Oh and I found my New Year, New You-nicorn medal on the porch carpet, Mr Psycho missed it because the package was black so it blended in with the rig rather nicely lol

Oh, well done you!! Definitely Hippo looks even cuter if that were possible with the scarf🧣!!! 🤩

Aw Hippo looks so clean now. I know what you mean about toys - I don’t like seeing them strapped to the front of bin wagons. We are mad aren’t we??

I just think it's a bit of a waste.

What a happy hippo now he's reunited with his scarf - he'll need it in this weather!

A chilly (and slightly hilly) run

sort of cross country style run in my local park (which is enormous and incorporates woodland and...

isn't me. I found this picture on the internet and it was taken in temperatures of -60C which does...

I Got Sunshine in my Shoes

direction and enable me to work out which circuit to run and in which way round - I hate finishing...

graduation (fingers crossed) and no more walking which I have to say I am glad about. I tend to...

I did it week9 run 3 complete