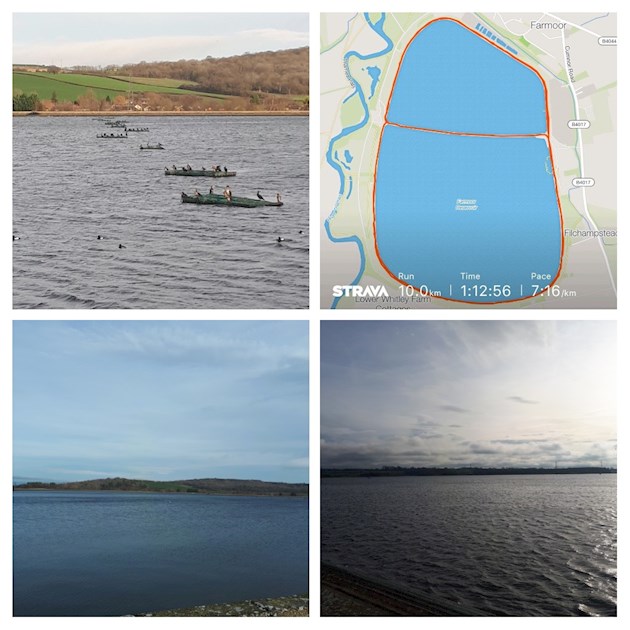 When I started this holiday running streak I'm not quite sure what I expected- other than 16 glorious opportunities to run in the daylight and have the equivalent amount of time alone in my own head - both of which I'd really missed in the crazy run up to Christmas at work.

I suppose I thought I'd see how it went but was expecting that runs on alternate days would have to be pretty short and that I might have to cut down on the length of all runs if my knees started complaining.

What I never thought would happen is that half way through the streak I'd run 10k and finish it with my legs feeling more flexible and fresh than ever before - no stiffening up during the drive home and hobbling into the hot shower once I get there.

Setting out for one of my favourite routes around the local reservoir I'd hoped to get a long run in but was prepared to listen to what my body was saying as I'm more determined to complete the streak than get in long distances - however, despite being a bit blowy, the conditions were lovely and what do you know one a quarter episodes of my current favourite podcast (This American Life) and one and 3/4 figures of eight of the reservoir and I've done 10k in record time (obviously for me - it's all relative right! 😂).

Another draw of the reservoir (along with lovely views, no dogs, flat mudless pathways and the sound of lapping water) is that or has a cafe! Hot chocolate never tasted so good! 😋

Great run! I used to work at the water treatment works - so know it very well and it can be rather breezy 😁👍

Yes - but I like the breeze and if it holds you up in one direction it helps you along in the other.

I found it as a venue as it's between home and work so in the spring/summer I can stop off there for a run on the way home. 😊

Looks very peaceful Deb. And a great run from you.

DebJogsOn in reply to Dexy5

It looks peaceful but there's loads of distractions - wind surfers, kids learning to sail, loads of cheery anglers and lots of bird life. I do love running there (and it's very flat 😂).

Sounds amazing! Well done on your 10k too. I’m still waiting for the day when I’m not stiff!!

I usually seize up in the time it takes me to drive home if I've driven out some where - but not today. Will wait and see what tomorrow brings...

I remember being amazed at what my body could suddenly take on doing C25K and it feels a bit like that again - after a bit of a sluggish run yesterday I couldn't have imagined completing 10k today and had chosen the reservoir as because however far you run you're never too far away from the car!

I also feel so much better than I usually do at this time of year.

There's no way I could keep it up when I'm at work - but might try it again at Easter.

Will see how the next week goes - I might be speaking too soon.

Yo! Fabulous; you should be proud. I hope you have a nice recovery run planned for tomorrow 😊🏃🏾‍♀️

I did 5k and could have carried on but had visitors for a late lunch and some other family jobs, so was really pushed for time. Tomorrow will be the same with a walk and meal with friends as well as some work to do by 31st (why didn’t I finish that report before Christmas?) so maybe 2.5k only. Just reminding myself that this is not supposed to add to stress!

Thanks Helen. Glad to hear you were out there too. I have a busy day tomorrow and expect to feel tired so am planning a jog around the block (around 2.5k).

I've also started thinking about work today and though I had resolved not to even look at what needs doing until after New Year think I'll start on a to do list at least on New Year's Eve. There is never enough time to do all the work but at least having a list will help me to feel more in control (and a bit less guilty!).

The running definitely shouldn't add to the stress - if it does we're doing it wrong 😂!

Happy running tomorrow but enjoy the meal and walk with friends too.

Lovely run Debs, looks a great place to run around. Interesting that you aren't feeling tired but rather rejeuvenated as time goes on!

Yes it's interesting. I expected to feel the distance more today but felt really good. BUT will withold judgement about how rejuvenate I feel until the end of the streak 😂

Good idea. Today could just be an amazing day! Although I suspect you will come out feeling better than you thought you would!

What a fabulous post and a great time too. Well done you. You're going to have to bottle this feeling for when term starts again.

If only I could! It does mean I'm relaxing during the holidays though which will help when I go back.

Interesting to hear how your body is responding to the streak. I've avoided them for a number of reasons, one of which being concerned about injury, but yours and FlickM3's experiences are tempting me to give it a bit of a go the next time I get a bit of a break (summertime, likely). You're doing so great!

I'm being really careful to listen to what my body is telling me and started out with the resolution to stop as soon as I felt as if I was doing myself any damage. I think as FlickM3 has said other than the determination to get out there you have to be flexible in terms of what you'll do each day depending on how you feel.

For me it's really just a bit of fun for the holidays and the opportunity to catch up on some me time (that doesn't involve sitting around and over indulging😂) but it is interesting to see how my body is coping and so far so good.

It's a huge learning curve, mostly in terms of how influenced we are by our minds with running. This month I've run through a stomach bug and occasional bouts of lack of sleep, and in each case I've felt better for running. If I hadn't been doing the challenge, i would have been convinced it was better for me to stay at home, and I've set out this month several times thinking no way was I going to be able to run at all and ended up doing a nice 6/7km

Allie, I think we've all been running long enough to stop worrying so much about injury. Of course be cautious, but we have built stamina and legs. I have the legacy of a fractured femur and a knee split to the bone then further damaged by falling off a ladder a few years ago, but I haven't had a single running related injury in 15 months (touch wood). If you're worried, i would say stick to a steady lope, keep your pace down, as I suspect part of why I don't damage myself is that I'm a slow runner. And take each day as it comes x

got to run through the most glorious sunset ever and the folk at the cafe stayed open until I'd...

which I'm going to plan lovely running routes for the weekend.

Felt very good and loose in the legs which I wasn't expecting. Now to decide where to run...

Thought if was a pretty gentle run but Strava tells me it's the quickest I've run this route - so...

about a running streak is once you've decided to do it the 'will I ? won't I?' debate isn't one you...