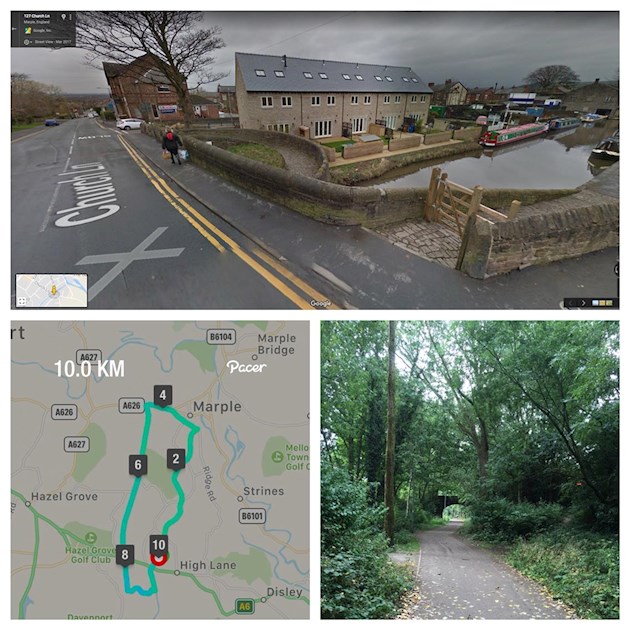 I looked at the forecast this morning... rain later, so I thought I'd try out my new 10k route. To be honest, I've been itching to for several days now, and today was finally the day.

Up the Macclesfield canal to Marple, down a couple of main roads, down the Middlewood Way (formerly a railway line, closed 1969 I believe), take the path past Middlewood station, which has two levels, this is the upper one. The lower platforms are still in use for some obscure reason, given that, as it's name suggests, it is bang slap in the middle of a big wood!! Anyway, up the path just past the station following this for about half a mile until it meets the canal again, run along the canal back to where I started.

So - that's what I did. I deliberately chose the same track to run to that I chose for my first 10k, and it went fine. If anything, I was faster over the first part of the run. But given that canals are level, I got a little worried by how much I had to drop down to get to the middlewood way, but I didn't think much of it. I think the old railway line itself must have a slight gradient sloping up from Marple, but I didn't really feel it. Before I knew it, several more k were under my belt, and I was nearly at Middlewood station, where I turn off to the canal.

And then the hills started. Nothing too bad, but this was definitely in the realms of trail running now. Up a steep-ish hill, though nothing too bad, then around the edge of a field, which in the winter is muddy, but now was full of hard-as-iron ruts that really slowed me down. The next few hundred yards were fine, but then there was a really steep set of steps I had to negotiate to get back to the canal. There's actually a longer way round that involves a gentle slope; I'll use that next time because there was no way having done about 9.5k that I was capable of running down the steps without injury! One last hump-backed canal bridge, and nearly back to where I started.

I was a bit miffed I didn't better my last time, but last time was on the flat, and fairly even terrain. This one had hills, bumps and roads to cross. In the end, I did it 1:10:25, with a slightly slower average pace of 7:02/km, which is only 20 seconds slower than my previous time, and on way more challenging terrain, so in conclusion, yeah, I'll take that

P.S. Please excuse the first Google pic, I was too busy running to take a picture at the time

10k is 10k and therefore a great run, remember the couch we all came from!!!

Thanks Chris! Yes I was remembering the couch and how far I’ve come. Amazing feeling isn’t it?

Very well done! Especially with those hills too!! One of my 10k routes involves a lot of steep steps, slippery boardwalks and stiles! All good fun!!! 😀

Thanks Sara, I’ve just looked at your post, and got all nostalgic /quite emotional. Before I was ever a runner, I was married, living in a lovely house literally right by the sea in Heysham, running along the cliff path or the prom would have been heaven. Now I’m divorced and living back with my parents. At least I have a nice canal, eh?

I know I feel so privileged to have such lovely places to run on my doorstep! (Only been here 4 years so it’s still a novelty living by sea!) Sorry things didn’t work out for you but you’re running now and doing brilliantly!

Your canal sounds great too !! 😀

Sounds like a really interesting route Neil and a great time too! My pace has been up to 2 mins a km slower cross country than it is on my seafront route but I know it's making me much stronger and I find the challenging routes to be the most enjoyable 😁

Thanks PT, yes, I really enjoyed the new route. I planned it using the “path” tool on Google Earth, and was really impressed that it was actually exactly 10k back to where I started. That makes my OCD feel all loved

Oooo I'll have a look at that. Just got myself an OS map of my area (l'm a bit of a one for getting lost 😂) and was wondering how I might accurately measure routes x

Well done Neil! Another 10k under your belt can't be bad 😊

Yes it is, another 10. Who would have thought. I never dreamed that I could do this you know. I’ll never tire of saying this: thanks so much for all your support Deb x

Still amazed I can do it! Doing one once a week now. 😊

Wow what an achievement and so fast too. I’m only an 11 minute miler and only running 8k so far, hoping to get to 10k by the end of August but I’m a snail I’m afraid. Sounds like you had a lovely scenic route to run around too. Your post is inspiring, thank you so much.

Thanks Agelesslass, glad I was, by some miracle, inspiring

Thank you! And don't worry about your speed. I think it's hard to work on speed and distance at the same time. Once you've got the distance up, you will be able to increase the speed, I know it, that is, if you want to

Lovely run, buddy. And well done on your 2nd 10k! Feels good to do it again, doesn’t it? And in cooler temperatures, hoorah! Look at us, doing 10k runs, look at how far we have come! Grit, determination and sticking with it has paid off.

Loved reading about your running route, thanks for posting. I am very proud of you and wish you many many happy runs to come!

PS keep tackling the more challenging routes and let go of time for a while, it will really boost your fitness and stamina. 😁👏

Thanks, dear Sadie! You know I've been itching to get at this route, right?

Actually, if felt brilliant to do a second 10k, and the route was great, with a bit of canal running, bridleway running, road running (boooooo!), mountaineering(!)... I can honestly say I'm loving this. I enjoyed that run even more than the first 10k!

Thanks for your support as always Sadie

If ever you're up this way, let me know, I'm sure you'd love running round here.

Great stuff Neil, second 10k under the belt, and sounds like a really interesting and challenging route. 👏👏👏

As a newbie to 10k runs, I’ve had the identical experience, with more “interesting” routes meaning my earlier 10k remained the faster one, even though I knew I was improving. So yesterday decided it was “PB time” and deliberately went out over my tried and trusted, flatter route - and easily put in a new PB.😎

So yes, different routes make a big difference to times, you just need to relax and enjoy those runs, knowing you’re improving anyway... the PB’s will come naturally whenever you feel like returning to a flatter route.😀

Thanks Hoagy, fun, isn’t it?! My plan was, for my next 10k, to do exactly what you suggest, and try and knock a little bit off my time

Yes, it certainly is 😀

the old railway line at Rose Hill station, down the Middlewood Way to Middlewood Station, back up...

not comparable. Time wise yesterday was exactly 1 min per K slower than the April PB run, but...

the option of a proper 10K circuit, to avoid needing to run that 'there and back' section to the 3...

comfy ASICS running shoes...) Was determined to at least try and stop myself slowing down as much...

Am I to old