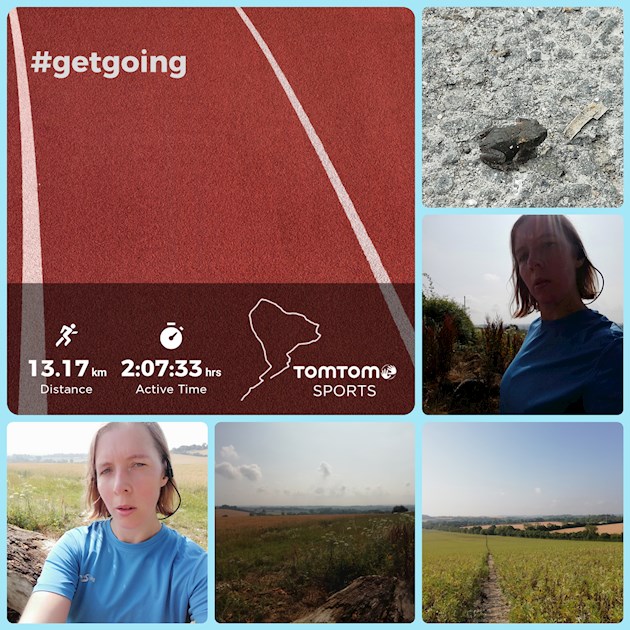 Training for the Great South Run in October but got a couple of 10ks in September plus a holiday so wanting to get the distance training early then build on it.

It was already warm when I set up just after 8. As I can't take the antibiotics for the spider bite on a full stomach or after food I had no breakfast but a cereal bar just as I left.

I was struggling as I left Alton and was sure that the 1.5km must be 1.5 miles (it was one of those runs where you can't get it together) but I kept going, into the fields behind the secondary school and then up behind Holybourne and across the fields. Managed to run up to the point in the photo, which was 3/4 of the hill, then I had to admire the view. Then jogged to the top of the field to discover a hedge blocking the path. Scrambled through the hedge to the lane but couldn't find the path the other side so headed up the hill (turns out the path is down the hill whoops) and struggled up a 1km slope, had to walk/ run bits but kept going. Checked my watch-4km. Very slow. Again, I thought about throwing it in. I could get back home in 2k along roads, but I decided to be stubborn, and with Pink and Kylie accompanying me I put my head up, shoulders back and kept going. 6 km in I got a rhythm and flat roads and for a couple of km enjoyed it and actually did 5-10km much faster than the first 5. Still slower than normal but better. Stopped to take photographs down the hill, as the sun shone off the dry fields and made the hill sparkle. Butterflies were out in abundance dancing around me as I ran, including a big one I have never seen before. Dark blue and white spots.

At 10km I had been going downhill for a bit then turned off the road down a bridleway.

Up down a semi sunken lane but stopped to marvel at the hundred or so baby frogs/toads walking and crawling across the path. They camouflaged so well you couldn't see them until mid jumped from under your feet. They were the size of a finger nail. Walked/hopped around them then off up through fields and back to Alton, where I had a hare out my speed to shame as it shot of down the path ahead of me, waited for me to catch up, but then zoomed off again. Gorgeous animals and the sun glistened off its coat. So graceful both running and sitting.

I struggled the last km and had a muscle cramp from the glutes down the back of my leg so at Holybourne turned off the tracker at 13km and walked the rest of the way home.

A hard run, but the views made up for it

sometimes being stubborn and refusing to give in works. Running group Mondays then short run on Wednesday/ Thursday 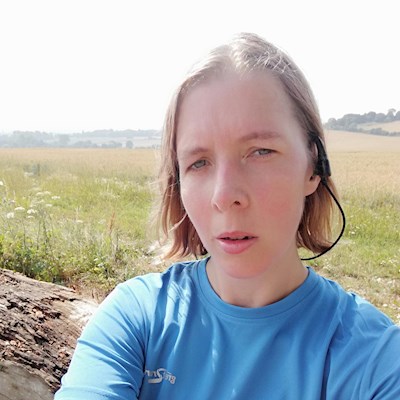 LittleNell83
To view profiles and participate in discussions please or .
Read more about...
8 Replies
•

Looks a great place to run! Sounds like you did some interesting cross country bits today. I can’t even imagine running for 2 hrs at this point - wow! 👍

I started C25k a year ago as 2 weeks. I was rubbish at school so didn't expect to manage. Now I find setting goals and challenges helps. Slow but steady and I will get there. So will you, honest x

That sounds wonderful, well done to you. You're in great shape already for the GSR.

Well done! The Great South Run is a fab race - I ran it a couple of years ago and hope to do it again this year too! Good luck with your training!🙂

Oh, wow, what an incredible run! Beautiful description. And isn't it funny how those runs that feel hard to begin with often turn into really long ones!

That sounds an interesting run LittleNell83. We live in Southsea so always wAlk down to cheer on the runners in the Great South Run . I never had any inclination to start running myself until I saw the Santa Run in December. Now I’m a c25k graduate I do the Parkrun along the prom and have signed up for this year’s Santa run. I cannot imagine running as far as you though. Well done.

LittleNell83 in reply to Dexy5

I still can't believe that I have run that far

My first 5k run with others was the Santa Run in Guildford for the BHF. The aim is to do the Great North Run next year if I can get a spot. That was my ultimate running aim.

Wednesday Run In The Sun

from my running menu. Chose an alternate route (one with steep hill at the beginning 😬).

Yesterday the sun beat me. But...today I beat the sun right back! 😂 🏆

you can see, the sun had it's hat on as well! with Mediterranean skies as we started off but...

Running with the sun 🥵

what I used to wear when I started this running thing omg I had so many layers..... Today I got it...

Gorgeous morning for a run in the woods ☀️🌲🌳

shady walk with Isla. Thank goodness we have this lovely place so nearby for shady walks and runs...