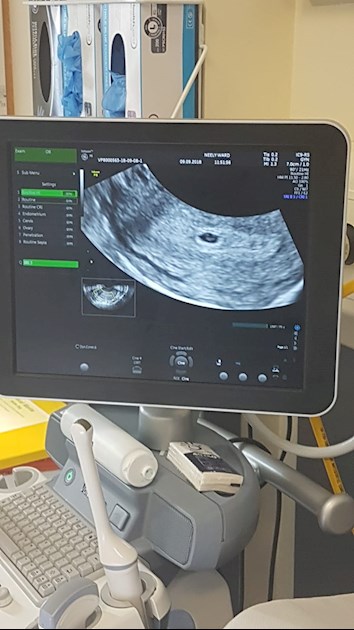 Hi all, my partner is near to 6 weeks pregnant now, and originally found out at A&E when i brought her there due to severe vomiting, weakness and dizziness. Preg test cinfirmed her pregnant, and 2 we done after confirmed the same. For precaution she was referred to early pregnancy department and was givn an ultrascan 4 weeks, no sign of anything growing womb.. Hcg levels were 357. We were told that it was prob to early to see anything and that it may either be an ectopic pregnancy or one that is beginning to fail. 48 hours she was brough back for more blood test, HCG levels upto 579. Nurse concerned that levels wernt doubling an said that they would be happy with at least a 66% increase which this wasnt. She was took back in after another 48hours for test and HCG now upto 731. Again not doubling or 66% rise. She was given another ultrascan to rule out eptopic and low and behold there was a yolk sack clear in the womb with what looked like the beginning of a developing baby inside. When this was seen the nurse was alot more reasurring and even suggested that my partner shudnt worry about more blood tests but i persisted i wanted her to have 1 just for added reassurance. This was yesterday at 5 weeks 6 days and today nurse phoned back with new HCG levels. They have only went up from 731 to 764. Nurse advised my partner to prepare for the worst and that she may have a misscarriage this week but again it may not be the case :/ she has to go back for a scan sunday coming to see what going on and we are just really worried as to whats going on. Has anyone on here been through something similar and went on to have a healthy pregnancy or know of anyone that has. Its hard to find positive stories online. We really want this baby, will be our 1st and want to keep as much hope as possible at this difficult time. Thanks for reading

Ps. She has had no signs of bleeding/spotting throughout and no pain whatsoever.

My hcg levels were slow risers : I now have two healthy twins .

Although the midwife / sonographer has told you to expect the worst I honestly don’t feel like they should’ve said that. It can add extra worry and stress to an already stressful situation .

I hope all is well on Sunday’s scan . Lots of love x

Hi Romaluna, congrats on your twins. Do you remember how your hcg levels were rising?

And then was something around 100+

It eventually went up and all was okay .

Have an in deapth chat with your care team provider and see what they . Hope all ends well xx

Hope all is well x

Did my medical abortion fail?

I’m still pregnant and my abortion failed? There’s absolutely no chance of being pregnant other than

Has anyone naturally fallen pregnant at 40? Starting to worry.

guys, myself and my partner have been trying for a baby since December, we fell pregnant second...