Small update on my Jeff: Since the... - Advanced Prostate... 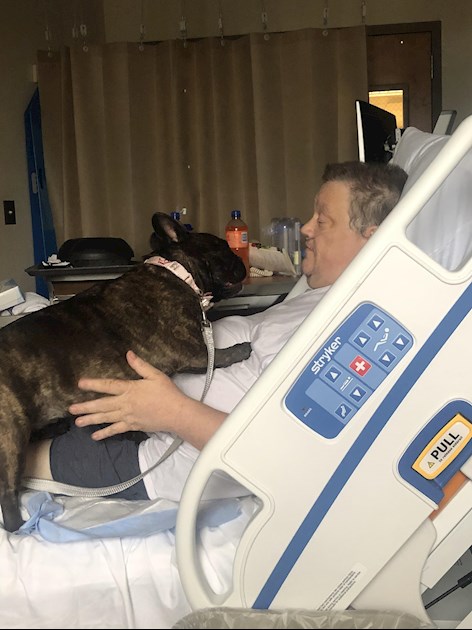 Since the Zytiga/Prednisone can potentially make Jeff sick, while he’s in the hospital, they have suspended his cancer treatment. Currently, it’ll be at least Tuesday for discharge.

Once he resumes the medication however, his oncologist authorized taking the Zytiga at night and the Prednisone in the morning. We originally believed that the Zytiga caused him to be so profoundly tired on Friday.

While fatigue is one of the top side effects of Zytiga, they actually think Friday’s incident was caused by his low oxygen stats. Jeff is currently still on oxygen. Without it his levels consistently drop to 85-86, but on it he remains in the upper 90’s.

Jeff continues to have excessive fluid retention in his legs. Additionally they have found fluid in and around his lungs. The low oxygen and fluid retention may be related to his heart. Tomorrow they will be doing an ultrasound on his heart.

Jeff has been given Lasix (a diuretic) to help rid some of the fluid. Also, they will wrap his legs to help push the fluid up and out. Although he struggles with mobility, I have asked for a walker so he can get up and moving and do a lap or two in the hospital halls.

We still don’t have a lot of answers, but should start learning more tomorrow. Jeff is scheduled for more testing and is due to meet with doctors from; cardiology, pulmonology, radiation, neurology, and palliative care.

Our daughter Channing surprised Jeff by bringing their French Bulldog, Bella, to the hospital

Pancake_Lefse
To view profiles and participate in discussions please or .
Read more about...
13 Replies
•

I'm sure they know not to stop prednisone. In fact, the edema may be a sign that he isn't taking enough prednisone.

Actually they did stop it, but Jeff started the Zytiga/Prednisone on Friday. He only had one dose of each.

Oh- no worries in that case.

So nice that they let the dog in. I know how much I miss my Sparky when I am in the hospital or away from him.

Technically only service dogs are allowed, but when I asked permission, the lady whispered, “ask on the floor … sometimes they make exceptions” ❤️🐾 the charge nurse just wanted to know if Bella was up to date on her shots (she is!) and the nurse simply took our word. Jeff was so surprised and so happy. 😊

Now that’s a great charge nurse. Some folks are so compassionate. ❤️❤️👏🏼

Hang in there Jeff, it will get better. For some reason you are being tested heavily upfront. You will find relief. Still with Mayo in Rochester? They can do it all there. Truly a Center of Excellence where you need to be. Mike

Pancake_Lefse in reply to Spyder541 year ago

Yes, we are local to Rochester and Jeff is at Mayo.

I have been where you are as a wife- God Bless you- keep fighting!

Hang in there Jeff? At this point it’s all questions? Mod med can some help pull him out of there!🙏awesome to bring Bella. That’ll cheer him up !✌️😎

Hope today was a good day jeff.....just thinking of you warrior....

My Jeff home from hospital

transfusion, drained fluid, Lasix, and continuing to wrap his legs to push the fluid up and out,...

My Jeff will forever make me laugh ❤️

exited. The doors closed and Jeff and I were alone once again. Jeff turned his head and said to...

can start a parp inhibitor (Lynparza) targeting his BRCA2 defect. So he will begin 4 cycles of combo

It’s NOT neuroendocrine or small cell!!!

possible heart issues. Jeff is scheduled for an ultrasound on his heart to ensure all is well. His...

Jeff took this after chemo..name:

doc wanted to do an ablation of the heart. Unfortunately, his heart rate was too low afterwards....