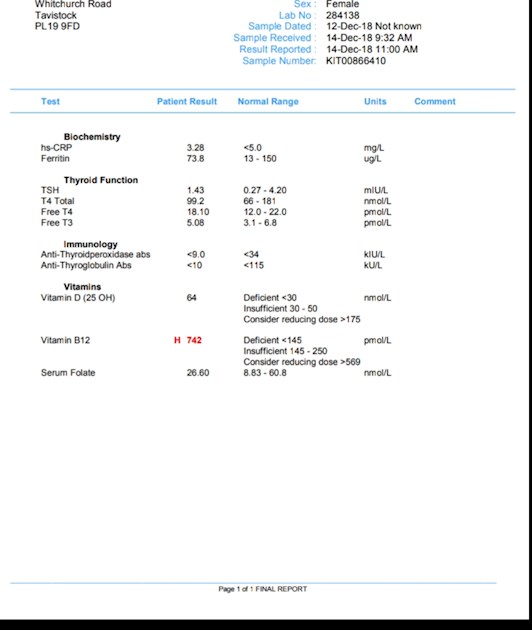 Is it normal for TSH to fluctuate within three weeks? My TSH was just above range three weeks ago - posted on here.

Really pleased to see my anti thyroglubulin is normal because in the past it's been very high.

I'm not on any meds & by looking at these results it appears I don't have hashimotos or any thyroid condition.

Does everything else look ok - should I still supplement with vit D? 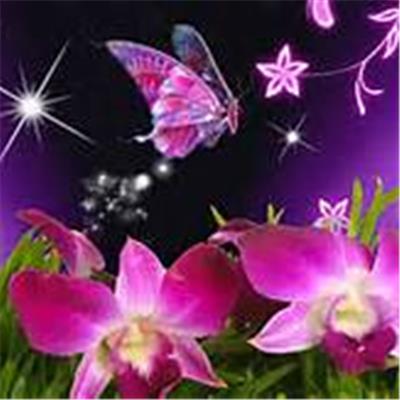 Butterfly65
To view profiles and participate in discussions please or .
Read more about...
16 Replies
•

If you had high antibodies before, then you have Hashi's. The fact that they are now lower means nothing, you still have Hashi's. It doesn't go away. The antibodies are not the disease. They fluctuate.

Thank you for replying

Oh dear - I thought them being low now meant that I was in the clear greygoose. What do you think of my ferrit folate & vit D are they ok. Is it normal for TSH to fluctuate considering the tests were only 3 weeks apart?

No, sorry, you still have Hashi's.

Your folate isn't too bad. Are you supplementing your vit B12? If so, are you taking a B complex as well?

Your ferritin and vit D are both low, they would be better around the 100 mark.

TSH fluctuates all the time. Were both tests done at the same time of day and fasting? Also, Hashi's causes levels to fluctuate.

Yes I was taking sublingual b12 but not every day, I stopped taking them a few weeks ago. I was taking a cheap b complex but again not every day. I've purchased a much better one now. The NHS test was taken mid - day - the blue horizon was in the afternoon. I know I'd been advised by you & slowdragon to do it as early as possible & fast but my sleep pattern energy levels, mental health & ability to do things on my own have plummeted to an all time low in the last few months. Often I'm not sleeping at all for over 36 hours & then I crash & sleep all day. My husband had to help me with the blood test, I did about an hour after waking, I hadn't eaten or drank anything for 12 hours - my husband had to help because I couldn't get enough blood but eventually we filled the test tube after pricking several fingers & posted it straight away.

OK, so that's why your TSH appears to fluctuate. It's highest early in the morning, and decreases throughout the day. So, if you don't have the blood draw at the same time of day each time, you cannot compare TSHs.

The FT3 also fluctuates, but to a lesser degree, and its maximum and minimum levels come about two hours after those of the TSH. So, again, would be lower in the afternoon.

But, the FT4 hardly fluctuates at all.

I did consider that greygoose.

When my husband arrived home for work & saw the test had arrived he wanted me to do it because he knows I've been struggling with normal sleeping hours, I'm not driving because I feel so ill & he wanted to get it done & off to the lab straight away.

I'm going to see my gp next week. I've been writing notes because if the truth be known I don't really help myself when I go to the doctors. I'm never fully prepared, I'm forgetful, tearful & I get confused & tongue tied, especially when they keep telling me there's nothing wrong with me but keep writing out prescriptions for setraline.

I stopped taking setraline last April, its been really difficult but I'm so sick of taking anti depressants & not feeling much better.

I've been reading about mild lymphocytosis & high thyroglobulin anti bodies & everything I've read points to Blood cancer or thyroid cancer. My Dad had non -hodgkins lymphoma & a few years ago I had a Squamas cell carcinoma removed from my forearm. I've read the spreading of Squamas cell carcinoma to other parts of the body is rare but it can happen.

I'm angry because the doctors know my lymphocytes have been high for years & I've shown every GP I've seen my private blood test results. However, they also know I've had alot of stress in my life so they put all of my symptoms down to depression.

Well, it makes life easier for them if they just put everything down to depression, they can just prescribe antidepressants and send you on your way - plus they get funding points for 'diagnosing' depression and prescribing antidepressants.

But, if you're trying to impress your doctors with your private blood tests, you need to get the highest TSH possible, because that's really all they look at - if they look at private tests at all. A lot of them don't.

Those labs don't show a thyroid problem, although the labs of two years ago did show very low FT4 and FT3. But, your TSH was low.

But, I take it that what's worrying you is that you might have cancer, is that it? Why don't you ask your doctor to do a test for cancer? Or have you already don't that? It's something I know nothing about, so I can't advise you which tests to ask for, but there must be something, and your doctor should know. But, if it's cancer, I don't think the Tg antibodies would be that high. That high is Hashi's as far as I know.

Around 5 months after my oophorectomy the squamas cell carcinoma appeared, a few months later my weight went up by 4 stone in just over a year, have never been overweight, none of my family were overweight, my parents both slim. This year I've lost two stone - was shocked when my gp weighed me & announced I was 12 stone because the last time I checked I was 14 stone- not changed diet but still 3 stone overweight & still look bloated & swollen, especially my feet ankles, wrists & fingers - Haven't been able to wear my wedding ring for 4 years plus, the only winter boots I can wear are uggs & the only summer footwear I can wear are flip flops - my left wrist is permanently swollen and aches.

I'm not going to mention my latest private tests to GP.

I am worried after what I've read & I would like further investigations, my husband is going to sit in the appointment with for back up.

Are you on meds for hashis greygoose? Have you experienced weight gain bloating & swelling, especially in your fingers feet, wrists & ankles?

I'm on thyroid hormone replacement, yes. And, yes, fighting the bloat/swelling is a constant battle, especially my legs, even when otherwise optimally 'medicated'.

Eating liver or liver pate once a week, or other iron rich foods to maintain ferritin above 70

And I think you have recently changed vitamin supplements to include a good vitamin B complex. If so cut back on the other B12 supplement

Getting retested in 2-3 months. Then possibly look at trial of Levothyroxine. But with TSH like this very unlikely to get any medic to agree to trial

Or full set on offer

Thank you for replying slowdragon.

I started eating liver last week, used to always eat it as a child but my family never liked it so I didn't bother buying it to cook just for myself but I will make a habit of it now.

I've just purchased igenus super B - Complex high potency & nutri advanced vitamin D3 with k2 - also selenium & magnesium. I've stopped taking b12 for now but will be careful of how much I take in the future.

Why do you think the DNA test might be needed?

What symptoms do you have

Butterfly65 in reply to Domino06

Sorry you are suffering so badly.

I can't help but wonder if you have another autoimmune disease undiagnosed, as yet?

I have diagnosis of hashimotos, sjogrens syndrome, ?lupus, CTD.

Before diagnosis, I had all symptoms you describe, plus serious fatigue.

Skin rashes were new symptoms, (never experienced before), and the dermatologist referred me to a rheumatologist. My bloods had shown AITD (as TgAb was high), the rheumatologist then diagnosed as blood result was also, ANA positive and Ro positive.

The reason I consider you may have rheumatoid issues is due to the symptoms of, "fingers, feet, wrists, and ankle pain and swelling". Such symptoms may be, indicative of other disease and, they are definitely, indicative of rheumatoid disease.

I hope your medical team can get to the root cause of your ongoing symptoms, as your thyroid results look great currently. Furthermore, I hope they get to root cause of your symptoms because, I remember very well how awful I felt suffering the same. I hate to think of you and your dear husband suffering, without support and advice of your GP.

thyroid disease, such as Hashimoto's thyroiditis or Grave's disease.\\\"

These are private bloods...

Been to see my GP about my Blue Horizon blood test results - horrendous response from him :o[

see my own GP but he wasn't having any of it. He dismissed the results and said he worked from...

So, thank you for suggesting I do more blood tests and here are my Blue Horizons test results

My endo says results area within range so...

I think I could be going from Graves/hyper to hypo