After Sinemet: Sorry I am asking another... - PSP Association 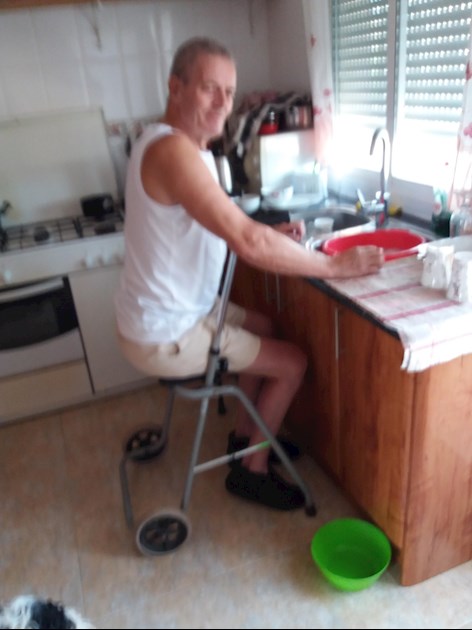 Sorry I am asking another question. I really am stuck with getting quick and expert advice here in Spain

I am very aware that Ian is becoming less responsive to the Sinemet he has been on for the last 4 years. He is on the strongest dosage. He also takes Xadago, or Safinamide.

I only have access to the neurologist one hour a week by phone, if I can get through.

Can you tell me if there is any replacement meds that may be helpful at this stage? It would be good to be prepared if I am able to talk to him on Thursday.

Ian is having to use his walker even in the house and his walking stick is collecting dust almost! Getting in and out of chairs is increasingly difficult and he is tired most of the time.

He is still motivated though, and I took this pic of him earlier doing the washing up. Sorry it's blurry!

Thanks for any info. 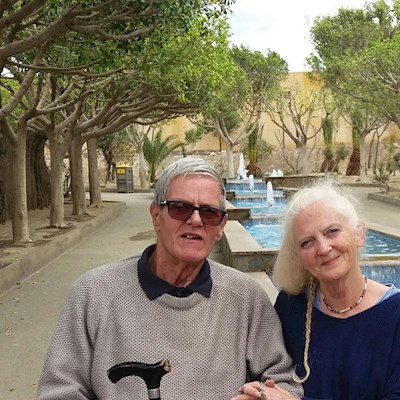 JCRy
To view profiles and participate in discussions please or .
Read more about...
23 Replies
•

Hi Juliet, love the photo of Ian! I’m sorry I don’t know of any meds that help, wish I bloody did! Maybe others may suggest something.......

One thing to add, that seat looks dangerous, if Ian is prone to falling backwards, ditch it and use the wheelchair instead! Not meant to sound harsh, just very wary.....

He is a star! Washing up and smiling too.

In the UK Parkinson's drugs are seldom given for PSP, I believe.

However some people do report doing well on it and others that it makes no difference. Your neurologist will know.

I'm not sure what benefit he has had from it. However Baclofen is good for muscle stiffness and spasm. It is most often used for people with multiple sclerosis.

You might want to ask Kenh1 over on the Baclofen thread.

The other possible contender is CBD oil which is used by people with Parkinson's for stiffness and spasms.

Waiving to both of you (and the dog in the bottom left?)

JCRy in reply to Kevin_1

One of the three dogs!

Ian has definitely responded well to Sinemet since he started it. I made a mistake last year when we went on holiday by packing a lower dosage and within a couple of days he was stiffening and struggling for steps.

We did try cbd oil but it upset his tummy badly. He is a little reticent to try again.

I will see if the neurologist suggests baclofen....if I can get through to him.

Thanks for the suggestions.

Kevin_1 in reply to JCRy

Well - being honest it was kenh1 who was leading me on this.

To both of you

Tail wags and woofs to the others.

Juliet tell Ian he is very good to do the washing up! Oh and he's very handsome! 😁.

My husband had no benefit from Sinemet. We were told there was nothing else he could take. I found massaging his legs helped as he got pain in them a lot. I also creamed his legs. He had softer legs than I did! 😁. He enjoyed the pampering as much as anything I think!

That was a good point about using the wheelchair rather than the seat he was sitting on in the photo. I think I would be inclined to agree.

As he gets worse you are going to need help Juliet. There is no way you will be able to hold him up. Can you hire some care workers? I do hope so.

JCRy in reply to Marie_14

We have a carer who comes in for an hour the morning...Spanish, of course, and her English is very limited. Because of the dx we are waiting for a reassessment by the equivalent of Social Services, but still no news of the appt. The max they allot is 3 hrs a day, but to be honest we don't need that yet. We have been advised to take what they offer.

He is 6 ft and I am only 5ft 3ins, so moving him may be an issue. He is very independently minded and insists on pushing himself. Sometimes too much.

I like the idea of massages....the physio he sees fortnightly does them and he loves it!

We have good friends in our church and the expat community is generally supportive, even though we live out in the sticks. I guess we can only take a day at a time here and see how we manage.

I do believe that the right help will present itself when we need it.

Miracles do still happen and I am ever the optimist. Time will tell.

Thanks for your concerns.

AnneandChris in reply to JCRy

Chris has a wheeled walker which he uses for mobility which has a back rest. Physio want him in a wheelchair but I'm trying to keep him mobile for as long as possible. We too have height differences, he's 6ft and I'm 5ft1.5ins (that half an inch is SO important). Trying to manouvre someone around is so tiring, so I can sympathise with your predicament. We tried Sinemet but found it not to be of any use.

So, Keep on keeping on, you're doing a wonderful job.

When Chris was diagnosed with PSP the neurologist, who was very familiar with PSP suggested he try sinamet, whilst saying few with PSP benefited. But it was worth a try.

Chris took it and said he felt it helped his mobility. It was the only medication he took.

Others have had a bad reaction.

Jack takes sinement 4x's a day and amantadine(symetrel) twice a day. It wears off quickly, but he enjoys a period of brighterness. He suffers negligibly with restless legs, but not stiffness. It's just a guess if the meds are actually "helping" with those common issues or not. We will keep taking them. For now🙂

Sorry I don't know the meds to help Juliet, but he sure looks like a nice man - and he has the interest to keep involved in household activities - that's huge! My guy developed apathy way too early...

Mine broke everything in the kitchen and is no longer allowed in that room!!!😆

I don't have an answer, but my husband with CBD definitely responds to high doses of Sinemet (C/L generic), because I can see from his face if he hasn't taken it. He's starting out on a high dose, though, so I have fears for when it stops working down the line.

Mary benefited from an intravenous drip of high concentration of vitamin B when she was in hospital and now takes vitamin B strong tablets (2 times per day) and Thiamine (once per day). She also takes Sinemet 3 times per day. Beware though that with Mary, Sinemet caused confusion and hallucinations when I was asked to up her dose. It now has limited/no effect. Hope this helps. Rob

What a lovely photo, thank you for sharing it with us.

Sounds familiar, my Mum responded well to Sinemet initially but the effect wore off and we stopped it last year, didn't see any change when we stopped it, only reduced the stress of trying to swallow pills, which gets more challenging.

Amazed you get to speak to a neurologist once a week, we get to see one every 10-12 months and physio is only for rehab, so you get it for 6 weeks & then nothing, you can ask for another referral, for which you have to wait for an assessment & so it goes on...

The opportunity is there for that one hour. Absolutely no other times! And bearing in mind he covers the whole province of Almeria, getting through during that time, with so many others trying, is a miracle in itself!

But I am optimistic...as long as my friend and translator can make it to my house by 8.30am . .! Nothing is easy here.x

I am not a physician but I have found this information:

Only some patients, type PSP-P (PSP-Parkinsonism), and only in the early stages (2 to 4 years), improve their bradykinesia and rigidity by taking Carbidopa/Levadopa/Sinemet. However if you didn't feel any difference then maybe it was not working for you anymore and you are entered on a classical phase PSP-RD (PSP Richarson disease).

On most of non PSP-P types the only thing you can do is counteract the symptoms…....but, despite how hard this disease is for everyone, it is posible to achieve a reasonable quality of life, even interesting.

But if your disease is a classic PD (Parkinson disease), then your neurologist can do something else.

JCRy in reply to LuisRodicioRodicio

Hi Juliet, it is great to see Ian still being active in the kitchen. W won't carry his cup from kitchen table to sink!!!

Unfortunately we have no experience of Simemet. Neurologist suggested putting W on it to help with tiredness but GP decided it would be of no benefit. We were due a 9month review with Neurologist this August but I've just been told there is a 2year waiting list!!

JCRy in reply to Nanny857

2 years.....crumbs! That's even worse than here. Hope you are able to get in sooner.

Sinemet has really helped Ian for over 4 years. It is only recently that his legs seem a lot weaker. Think I am going to try massaging his legs daily. Just waiting to buy some oil. Have been watching how on YouTube! It's going to take a bit of discipline on our part, but I guess that's what we do.

Thanks for your input, Nanny. I hope you have a better response from the medics soon.

Nanny857 in reply to JCRy

Thanks Juliet. Our NHS is awful at the moment. I'm going to email neurologist, as he told me on our last visit, it's the one who shouts the loudest gets a response. As so many here said Sinemet didn't help, I didn't pursue it. However having read many good posts on CBD oil, I'm thinking of getting it for W to try.( I might even try it myself.) W is experiencing lower back pain and stiffness so we are waiting for Physio appointment but oil might help too. Here's hoping. Xx

A replacement of Sinemet

some of you. My father's doctor stopped Sinemet for him as his movement is now limited and he...

Does anyone have a good experience with Sinemet?

Everyone talks about all the horrible side effects of Sinemet and how their loved one is much...

shortness of breath, but the neurologist did not want to blame the Sinemet as the cause. Several...

From the beginning of his diagnosis one of the meds he was put on was Sinemet to see if it would...