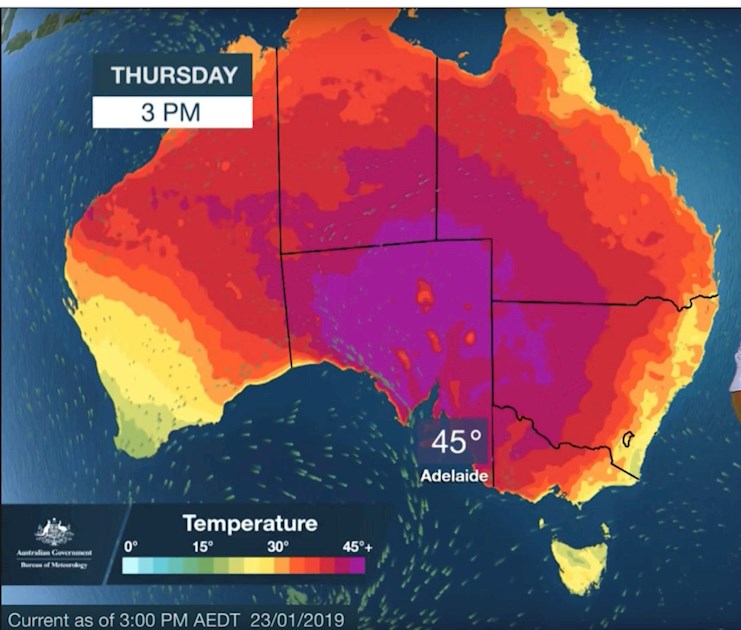 Well, Adelaide hit an all time high of 46.6C today. In fact in South Australia, there was only one weather station that read less than 40C, and that was as far south as you can go. Every weather station set a new record for a maximum temperature.

I was going along quite well, only switched my air con on at about midday. So, all good, bored out of my brain, but ok ......

Until the power went off at 7:30pm 🙀 There was zero breeze/wind so it was sweltering, and the power didn’t return until 35 mins ago (11pm).

We’ve a small cool change wandering through tonight, all of this lot will be moving on to Melbourne, Vic tomorrow. As we share an electrcity inter-connecotr with Vic, there are no garuantees that the power will stay on - oh joy!

Photo for all those who are feeling a little chilly 🤣

You're one hot bod Deb! Pretty impressive map. I do hope it doesn't turn humid with it & tomorrow brings the promised cooler temps with no more leccy outages.

Hidden in reply to nomoreheels

Fortunately the southern part of OZ is not generally humid, and it’s currently a very pleasant 26C, with a breeze, which should help move the hot air out of the house!!

nomoreheels in reply to Hidden

My sister in law's son is in Sidney, centre. He usually copes ok in the heat but he'd been food shopping & said it was really draining. They're going out in April, by then it should be more temperate. I hope the breeze continues to move the air for you. Take care.

Wow, I suppose you get used to the normal high summer temperatures but not that heat! Especially with no aircon. Phew! I feel fir you...

Downtime in reply to Downtime

Hidden in reply to Downtime

I’ve never seen a weather forecast of 45C for a capital city in OZ - ever. Not normal weather, but apparently we’d better get used to it. I guess it’s the OZ equivalent of your “Beast from the East”

Give me chilly any day! There's only a couple of spots on that map which would suit me...one is the small green patch at the southern tip of Western Australia, plus there's one or two tiny smidgeons of green in Tasmania.....cool man! v

Hidden in reply to wishbone

Ummm, unfortunately Tasmania is on fire, and is getting “my” weather right now. Really sad, lots of heritage listed world conservation areas in strife

No more complaining about the cold, snow and ice for me! At least I can put on more clothes, but not much you can do when it’s so hot with no AC... hope things cool down soon!

Hidden in reply to Soreknees2016

My sentiments exactly, give me the cold any day. At least if the power fails, you can always light up a fire or something

The heat is heading down my way in NZ next week. Not so hot though. Just 35 degrees plus. I don't have any AC. I basically can't do anything as the heat saps my energy. I may plan a trip to the library, mall or McDonald's. Nice and cool places!

Feel your pain Deb! It was a scorcher but at least my air con was working. I did have to go to and from work. I almost burnt my hand on a petrol bowser though. Mind you when we got home from work it was 39 inside! I hope we don’t have to go through that again. Nice to know there is another NRAS soul here though. 👋🥵

Hidden in reply to Susie-Q

Whereabouts are you Susie-Q ?

Susie-Q in reply to Hidden

Near Kurralta Park. And you?

Hidden in reply to Susie-Q

Yikes as Paris Hilton would say “That’s Hot!” On a side note I wanted to name my second daughter Adalaide or Edelweiss. I got shot down on that lol we settled on Leyna. Funny story my oldest is Blythe I love Blythe Danner and after she was born w found out she was born on the same day as Blythe Danner Feb. 3rd. My youngest Leyna was born right on her due date and on her grandfathers birthday. My wife wanted to name her Aleyna I didn’t like the A at the front so we settled on Leyna only to realize later my wife’s favorite musician is Billy Joel and he has a song called all for Leyna. Really freaky stuff. Sorry for the story I just love tells by it lol

Phew🤪! Hope it cools down soon for you. X

Off Topic. What's your best \"You've Been Framed Moment\"

so unbelievably proud of myself.

Anyway, as you all know I’m currently on mtx and...

stiff. I haven't worn them yet this year as the weather was too warm but have just tried them out...

Back at work off topic

had for lunch and it was so easy and very tasty. All new dishes for the Sunset supper events we are...

I forgot about this this morning but the power went off yesterday and the radio is supposed to...