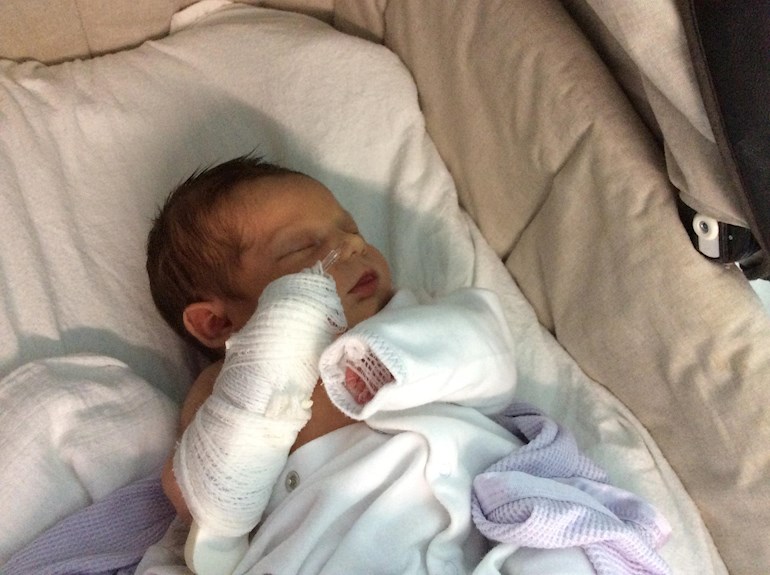 My Daugher Sophie had her second baby on 14 th August . On their first day home Sophie became ill. She was admitted into hospital and was diagnosed with acute sepsis.

Baby Alice had been a quiet baby a little yellow she was not passing urine often with these niggley things and with a very poorly mummy we took her to the hospital too.

The consultant decided to perform a lumber puncture.Alice was diagnosed with meningitis she was four days old.

She has damage to her kidneys and bladder.

Today she has a hearing test her care will be ongoing

Sophie is recovering from her sepsis slowly . She has been told to take Alice's temp twice a day every day to check for temperature that may mean a recurrence of the meningitis and to contact the hospital immediately for a possible repeat lumber puncture.

We are a long way from the end of this .

hi, my son was also very tiny when he got meningitis, bacterial strain, probably from birth but manifested at only two weeks old. It's dreadful it can happen to babies So small. I remember the look my son gave me when they were Trying to cannulate him but his veins would just keep collapsing as he was so small. He looked at me as if to say why have i been brought into a life like this? They are so defenceless and as a mother you feel so helpless. Charlie ended up in theatre fir a more permanent line leading fr ok m his ankle ho his heart to support the 21 days of iv infusions. It is an incredibly long road ahead. It's been 7.5 months for us and we are still very much affected by it. we are still having follow up, and are waiting tentatively for his milestones.

Alice sounds like a fighter. 💪 like my boy, one day at a time tiny steps. I strongly suggest That you suggest some ptsd counselling, for your daughter and yourself if you need it, as i realise now that I've just been on auto pilot to this point and haven't really dealt with the trauma of the event. even after all these months.

i know exactly what your daughters going through. It's truly horrific. The worst thing i have ever been through.

i hope she passes the hearing test, I'm sure she will 🙏❤

feel free to private message me if you need to talk.

i promise you there's a way out, its just a very long walk ❤❤

I need help and answers on meningitis please!!!!

Hi my baby has meningitis and has been hospitalized for a week and two days now...she is eating and...

Men B - my daughter's story

aching, then she was sick several times. Her temperature rose and she was achy all over. When her...

My mum (72) died from pneumococcal meningitis.

BOTH ears and sent her home with oral antibiotics and ear drops. GP told mum that she might vomit...

into 12 days of sedation and so many antibiotics being pumped into her, she's had lumbar puncture,...

post-treatment from the hospital and dizziness.

Do others have vertigo (bbpv) issues after VM?

18 months of sensory overload and headaches