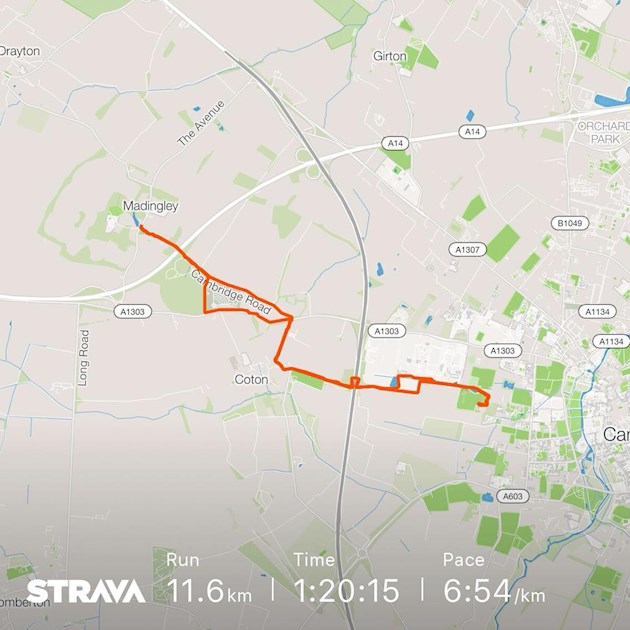 I thought I’d do a run to my new club to pick up the vest all new members need to collect. I wasn’t sure how far it was, but didn’t think it would be too difficult. What I found was it was hard from the start - stiff legs that didn’t want to loosen up, but I managed to get to the club and stretched them out a bit.

The run back started better with a couple of decent splits, then the legs faded and I ended up walking / jogging back home. Felt like I’d run a marathon uphill several times when I got in - I’ve never felt so bad after a run. Feeling great this morning though!

I’m going to leave the bike at home this morning and drive to work today to get some rest before the next long run with the club on Thursday. The only reason I can think of for my poor performance is my 6.5 mile commute each way on my bike is not helping.

Probably just one of those bad runs..

May be the bike if you are doing more excercise by commuting each day. And ,like Abi says it may just be a bad day. Either way its miles in the bank.

I do a similar length cycle commute to yours 4 days a week, and run twice a week (Parkrun and a longer run on Mondays).

I started running when my bike was out of action for a while, and then continued over the Winter. I’ve found since I started cycling again (Spring) that I’ve definitely got better lung capacity for hills whilst on the bike. I rarely feel tired at the end of the commute the way I used to. So the running certainly seems to have helped the cycling!

In the other direction I’m not so sure. I think since I started cycling again I might be stronger in my core? My running times have improved, but you’d expect that anyway as I’m a novice runner. I do sometimes get a slightly wobbly feeling at the back of my knees from the bike but nothing major.

Yours was probably just a bad run, or perhaps undernourishment? Have a banana! Sometimes I’d like to commute and then run on the same day when I get home, but I think it would be a bit much on a work day...

Getting the hang of running slower.

saturday long run on a gloomy morning in London. I have been trying to focus on running slower as I...

Negative splits and getting faster makes me happy 🙂

bringing my average pace up faster by pushing harder

time for 5k, this morning. I'm faster than this pace on shorter runs, and today's run involved a...

this year. I needed to get in a couple of longer runs in preparation for the town&gown 10k on...

The one that didn’t go to plan

long runs recently. Having lost the love for runs over 10-11 miles, and focussing on my zone 3 runs...

Nothing ventured nothing Gained.

This is not the post you've been looking for...