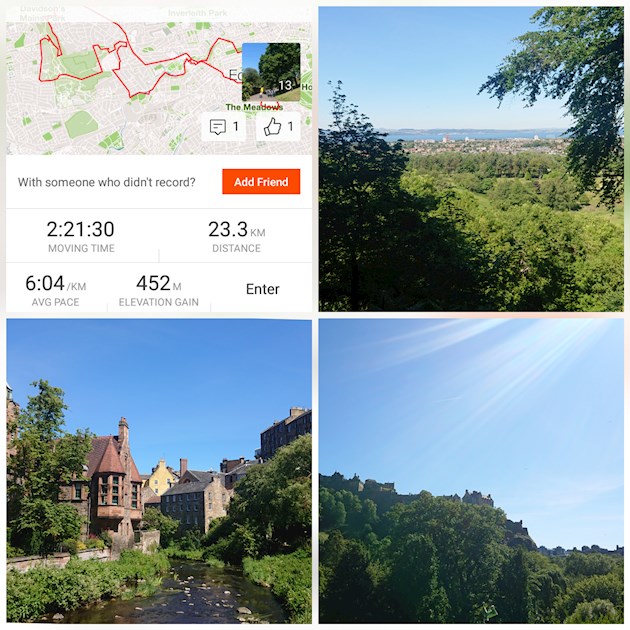 I was determined to go out and do a half marathon distance today, just to make sure I could do it. My weekends will fill up again coming up to the GNR so I possibly won’t be able to get out for as long, and I feel it’s psychologically important to know I’m capable! Then it’s just a case of building on endurance and stamina over slightly shorter lengths if needs be. I hope.

So, as the weather forecast was simply a big yellow sun and several warning exclamation marks for pollen and UV, I decided to wear my new Under Armour ‘shorty’ shorts to keep cool, and boy they aren’t kidding. They looked alright in the house, but the minute I got outside and started running they immediately got 50% shorter and to all intents and purposes I was just running in tiny pants. I didn’t give a hoot though—despite the fact it’s tourist season in Edinburgh and my tiny pants had quite the audience. I seem to have entirely lost my very British prudish streak since I started running.

The run was almost the same as last week, as I wanted to try the hills again, for some obscure reason. I cursed this decision on several occasions—what seems like a good idea when you’re sitting on the sofa is not necessarily so good in practice. I did however add on an extra bit in Ravelston Woods to bring my distance up and hopefully allow me to hit the 21km mark. At one point coming up to Corstorphine Hill my intended path was blocked by a stripy cordon and lots of policemen in uniform, who sent me on a detour round a golf course and through a load of stinging nettles. Thanks guys, can’t you see I’m running in my pants? I presumed a terrible murder had taken place but a lady walking a sausage dog caught me inelegantly climbing over a fence to get back onto my original route and told me she’d read on Facebook that one of them had been camping out for charity. I was a little disappointed, Edinburgh doesn’t get a huge amount of drama and murder is much more exciting than PC McGregor sitting in a tent on a hill eating beans. I listened out for the zoo this time, but only heard the woodland birds, with varying degrees of tunefulness from delicate blackbird song right the way through to the clunky rattle of a crow, barking away like a bit of old machinery. No lions today ☹

Having gone on about never taking water out with me, today was—by Scottish standards—ludicrously and relentlessly warm, and I had drunk all my water by the halfway point. All I could think of thereafter was cold water. It was all-encompassing and bordering on obsessive. I ended up ducking into a pub and putting on my most beguiling face (albeit sweaty and pink) and asking the kind barman if he’d fill up my bottle for me, which he obligingly did.

From this point onwards the hills and woods were largely behind me, and it was just a case of keeping my legs moving till I got home really. Except I drank all my water again, and started daydreaming of icy, fruit drinks from big coffee chains. Once back in the arguable civilisation of the city centre I stopped my Garmin and stood outside Café Nero for ages trying to guess my bank card number to load up their app, but failed abysmally. I then tried Starbucks a bit further on, even downloaded their app especially…but no, they don’t take Paypal. Finally I got to Greggs just as they were closing and had to employ my beguiling face again to get them to unlock the door so I could get something to drink. My beguiling face is clearly really working for me right now, as they let me in and I got a Lucozade. Refuelled, I ran up The Mound and past the castle to get home. Man those hills.

When I got back it turned out I had done 23.35km thanks to the non-murder detour and several getting-lost-in-the-woods moments. And lessons learned? I need many drinks during a half marathon distance on a hot day. I will not leave home without a pound or two in my pocket next time, and all my apps on my phone topped up!

Great write up and you missed a perfect opportunity for the classic taggart line, maybe you're too young hehe youtube.com/watch?v=jpxKIo2...

Oh I didn't realise this was your premier HM. You seem so quick and accomplished 😊. Hearty congratulations to you in that case 😎

Thank you! But I am neither of those things, as anyone who saw me standing outside Cafe Nero desperately bashing numbers into my phone in the hope one of them might be my bank card will attest

Well done!. I’m doing the GNR and live 10 mins walk from the start line. They have loads of water points along the way and some lovely spray showers at certain points, running through them is bliss when it’s hot!.

SqkrHalf Marathon in reply to Frostie2560

Crossing my fingers it will be a bit less warm come September, but it's good to know that I'll not have to beg a publican for assistance!

Great post and great time, especially in the heat and with all the begging-for-water stops!☺

I agree, it's good to know you can go the distance, well done - and would you like a Half Marathon badge?

Well done, and important advice. I always carry my debit card and a coin or two when out on long runs.

all! Two days later I did 6k and again got very heavy legs whilst running. Yesterday 15k, no...

My first half marathon

So got my first ever half marathon race on Sunday a little local race called the Headcorn half,...

confident at the start. I was running with a friend and we had done all our long runs together over...

slow as there is a long uphill run to get to the main road through the woods🌳what the heck I...

unable to get any water out of my hydration vest,hubby to the rescue.