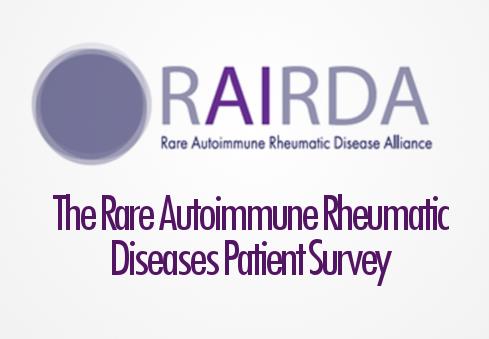 If you have a rare autoimmune rheumatic disease such as lupus, scleroderma or vasculitis, please spare us some time to complete this online survey; lupusuk.org.uk/rairda-survey/

The findings will be featured in a report that will highlight areas in need of improvement in the way care and support is provided. The report will used to bring these issues to the Department of Health, Parliament and other key organisations, with a view to working together to improve care.

Paul_Howard
Partner
To view profiles and participate in discussions please or .
Read more about...
18 Replies
•

Thanks Paul. This will make interesting reading.

Paul_HowardPartner in reply to Nicole20005 years ago

I've filled it in too despite having primary Sjögren's - because according to my rheumatologist this is a rare rheumatic disease (in primary form) - and as such it's very isolating - especially as the BSSA isn't even on the list! I think this is probably because we are lumped in with secondary Sjögren's and Sicca Syndrome - which seems all wrong to me.

Sorry if I shouldn't have completed it but I want to highlight this point just in case the BSSA is trying to join this alliance but being told that Sjögren's isn't rare enough.

It is if you have it in primary form like mine and there's only one dedicated specialist in the U.K.

Paul_HowardPartner in reply to 5 years ago

Thank you for completing the survey. We certainly would like people with Sjogrens syndrome to take part.

We would like the BSSA to join RAIRDA - I'm not sure whether they have received an invitation yet or not (it is very early days for the alliance still).

in reply to Paul_Howard5 years ago

Thanks so much Paul. I did email the BSSA administrator about this a year ago when I first became aware of RAIRDA - and was informed that they were hoping to join. But BSSA is a pretty small charity as you know - so perhaps the process of applying to join was considered more time consuming than the board of trustees felt was worthwhile?

Or perhaps Sjögren's isn't sufficiently rare once the secondary form of the disease is added in to the overall picture?

Paul_HowardPartner in reply to 5 years ago

I've just confirmed with our CEO and apparently the BSSA are (at least partially) involved with RAIRDA. Apparently Dr Elizabeth Price will be attending future alliance meetings to contribute on behalf of people with Sjogrens.

in reply to Paul_Howard5 years ago

Oh that is great news thanks Paul!

I am not sure whether my sister qualifies. We are from Singapore. She is 46 years old and has been diagnosed with SLE, sjogren’s syndrome, bullous pemphigoid and now in ICU with listeria meningitis. I am looking for anything to help her

This survey is only for people who are living in the UK, so if your sister is still in Singapore, she would not qualify for this.

If you need any information about lupus, you can access our full range of publications online at lupusuk.org.uk/publications/

Not sure if I qualify either 🙄 I've been diagnosed with UCTD (I have Lupus, Sjogrens and RA symptoms) I have tested positive twice 12 weeks apart for anticardioplin antibodies too. Just hope I can contribute too.

I believe that you should be fine to complete the survey. When it asks what condition you have, just list UCTD in 'other'. Thank you.

vaccine for patients with autoimmune diseases and their families. The survey is anonymous and takes...

July, the Minister for rare disease at the Department for Health and Social Care, Baroness...

in this online survey. It is designed to capture the experience of patients affected by rare and...

everyone, Today, RAIRDA has published their report based on the responses to our online survey...

Burning 👣 looking for some sympathy 🤗

What can I do? Help please?