How does PD lead to leg edema?: I posted a... - Cure Parkinson's 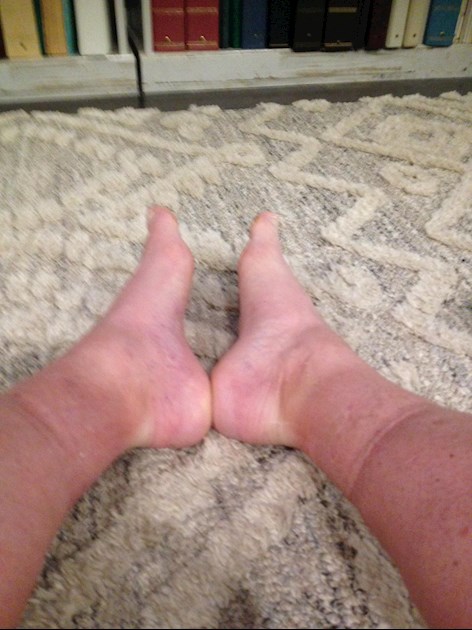 I posted a few days ago but no answers. Both legs are swollen due to pitting edema. I have slowness/weakness in my left leg. A few days ago I noticed swelling and assumed it was just in my left leg. But this photo shows swelling in both legs. I started Sinemet last year. Since then I've put on about 30#. I spend three hours a day on my treadmill, burning 1000 calories each morning workout. I eat two meals per day. I should be dropping weight like crazy. In the past when I was training for marathons I had no problems getting my weight to 160#. Now I'm stuck at 200#. The constipation may be adding poop-weight. The edema may be adding water-weight too? Is the root problem from Sinemet? Does Sinemet slow the body enough that calories aren't being burned as efficiently as pre-Parkinson's. Any advice appreciated. More important, any advice how to drop the weight? I planned to join a gym soon. None of the area gyms have saunas.

@kaypeeoh, I have the same exact problem right now. I chalked it down to the Amantadine that I have been taking. That is a known side effect. I asked my MDS and I never got to the answer because we had too many things to discuss. Maybe I should ask him via health portal messaging.

As for weight loss, the only thing that works for me is intermittent fasting.

In the early days of having PD I didn't like how sinemet made me feel: No energy, tired all day, so the neuro Rx'd Amantadine. That was ten times worse for edema. I couldn't tie shoe laces because my feet were so swollen.

I started it last summer and didn’t really notice it until I had to wear socks and real shoes. Also had the skin marbling and dry mouth, which I could have lived with. Do need to wear socks and shoes eight-nine months out of the year, so I switched to Artane for my tremors.

I did not credit Amantadine with causing the edema, I thought it was the Ropinarol. I take 3 amantadine a day. I will be talking with my neuro and see if I can cut it back but I am not holding a lot of hope that it will be possible.

It is a vicious circle, dry swollen legs, compression tubes with thick non elastic socks over and skin cream every day . The skin becomes very thin easy to break and infection to set in. A bacterial infection started and every antibiotic in the book was thrown at it and surgery. This resulted in damage to the lymph system and it all got worse.

It seems no matter how bad it is, it can always get worse.

I strongly suggest you do not take this lightly.

Clean your legs with soap and water very day. Apply copious amounts of skin cream 3 times a days. After shower, nap time and before bed. Use 3 or 4 different kinds, with at least one of them containing anti bacterial.

Jump all over any small cut or abrasion, clean the wound and use antibacterial under super large band-aids. I have found the silver paste to help if you think you are loosing the battle, which you probably are. monitor it carefully.

Ropinerole was the reason my hubby had oedema, just looked exactly like your legs, his parkinsons nurse put him on a water tablet which has helped,as for weight issues, he has very little weight loss it fluctuates, not sure if it is the meds that are the root of this. We are not junk eaters , hate the fact we would be fasting for anytime as nothing worse than being hungry. Hubby doing good with excersise daily and keeps busy with other.. labour work. Keep moving helps to reduce oedema.

My husband before PD diagnosis was dx with HIgh blood pressure and one of the meds he was given caused this oedema quite significantly. The GP changed the meds and added in Indapamide which is a mild diuretic which seemed to get rid of the Oedema. Fast forward a couple of years to PD diagnosis, non of these tablets have caused oedema to return. He takes Modopar, Rasagaline and Amantadine. He still takes the Indapamide.

mine are similar. spoke to dr yesterday and the dopamine agonists are said to be even worse than rytary and cause greater edema......I'm using compression socks but I'm frankly worried and going to get vascular consult.

I started getting similar discolouration dry skin and swelling around the ankles soon after adding Co-careldopa to my cocktail of dopamine agonists and rasagiline which had not caused me any problem beforehand. These drugs affect us all differently. I also think (layman speak) PD has a tendency to make familial/genetic weaknesses worse and my family has a history of these kinds of swollen ankles and associated skin discolouration. I can’t really even blame the drugs but it did come on suddenly after the introduction of L-dopa. I am doing nothing to treat it. If it gets worse I will use creams etc. Can’t help with other matters as I have no new weight issues. Digestive system OK but flatulent! Finally have an excuse! Keep bright and positive.

Only want to add that maybe a vascular / cardiac needs to be consulted and yes to compression stockings for sure, leaving the legs to pool water increases risk of chronic lymphadema and skin changes. Yes poop weight and water retention can add lbs - would guess as much as 10-12 lbs...

I agree it could be something else besides PD. I would call your nuerologist to make sure.

Well you are experiencing peripheral edema, and it certainly can be related to amantadine...but also some other things going on which you didn't mention so I guess can't be ruled out since I don't know what else you might have going on. Assuming your amantadine is to help modify the side effects from L-Dopa or that nature.

This is from a long time ago when I was involved in health psychology...it's been a couple decades though so my info is going to be a little out of date.

But from here on out this is what I remember:

there are a number of cautions that reading your paragraph suggest you should discuss pretty quickly with your doc. It could be the amantadine or it could be an interaction with that and another med or supplement you might be taking, combined with the fact that as we age we gradually decrease our ability to eliminate amantadine from the kidneys, which creates a gradual excess dose-effect.

Also, too much exercise is one of the cautions, at least you have to look at it...as you may be producing more metabolic activity than your heart and lymph system can keep up with, especially if you are using more than one med for parkinsons or are using an extended release form of amantadine. The extra weight and edema are definitely not good situations, not to be taken casually.

Amantadine was branded as Symmetrel and that is where I mostly knew it from, they don't make that brand anymore...it was as a counter some of the side effects of the dopamine modifying meds in mental health cases back then and also used, really similar, to counteract some of the dopamine-blocking problems that came with L-Dopa. It's role is to counter the excess stimulation from increasing, or drastically curtailing, your dopamine activity, at least in some of the dopamine receptors or muscarinic receptors...the involuntary movement problems were pretty much permanent back then, dyskenesias from the powerful anti-histamine type of "zine" drugs and the anti-psychotics that shut down a number of dopamine receptors, mellaril (that's withdrawn now too, caused heart arrhythmia... haldoperidol... and in PWP that means usually the activity from L-dopa and dopamine agonists and excess glutamate activity......but over time as we get older, the kidneys decrease some of their ability to clear amantadine, and if you also have some kidney disease that's a problem. Amantadine clears through the kidneys so if they have some problems that has to be taken into account. Anticholinergics like antihistamines that youd take for allergies interact with amandtadine.

Tell your doctor what other prescription and nonprescription medications, vitamins, nutritional supplements, and herbal products you take. Be sure to mention any of the following: acetazolamide (Diamox); antihistamines; co-trimoxazole (Bactrim, Septra, Sulfatrim); dichlorphenamide (Daranide); hydrochlorothiazide (called HCT for short) with triamterene (Maxzide, Dyazide)... if you are being treated with heart meds or BP meds it may be an idea to discuss whether a diuretic would work for you, which could also help with the edema. The HCT I mentioned earlier is one of those. It's used to lower blood pressure, the class of drug lowers BP and water retention by interfering with the takeup of salts by the kidneys, you lose salt and thus lose water, thus lowers BP and cuts some of the edema. BUT it interacts with things so doctor must know what all else you have in health and meds. ALSO too much exercise can be a complication...if you were a long distance runner, or have some complicating situation, like your PWP, then getting back to a great deal of exercise like you used to do might be a good idea or it might be you have to have some limits.

Some others that interact with amantadine: ipratropium (Atrovent); medications for irritable bowel disease, mental illness, motion sickness, sleep, or urinary problems; methazolamide (GlaucTabs, Neptazane); quinine (Qualaquin); quinidine; sedatives; sodium bicarbonate (Alka-Seltzer, in Zegerid); stimulants; or thioridazine (Mellaril). And some steroids. So these all interact with amantadine.

Also if you have kidney disease or ever used much alcohol.

So other things that can complicate your specific situation are your history...so if you ever had used street drugs, had hepatitis, overused any meds, had a seizure disorder. Or a sleep disorder or urinary tract infection. Or liver disease.

That's what I remember...since you mentioned weight, exercise, edema, and amantadine, these are the kinds of things I would have talked about back then.

don' t sit for more than an hour at a time without moving, cut back on the sodium, eliminate salty foods, walk more, and elevate legs in between your walks during the day

It’s a reaction to Pramipexole

THC/Marijuana: Why/how does it work for PD?

rigidity, bradykinesia and mild dystonia on my left side (mostly left arm/hand) are GONE during the...

Is edema a side effect of RYTARY?

caused the edema. Now I'm on Rytary alone and edema is back. I wore shorts today and both the...

toe-curling started on the right foot also, so Sinemet controls both feet now...however, when I...

How does anyone overcome anxiety due to Parkinson’s

Paxil and still have internal tremors 75% of each day. I can’t relax. It makes for a most...

the best I can with a variety of things but some days it’s bad. I’ve had two doctors tell me that...

Much of What We Have to Fear Is Fear Itself?

Constipation due to Parkinson’s