so, for those who saw my previous post, the lovely clean white dog we are taking care of has been assessed at doggy fat camp (by me) and was prescribed some limited calories and some brisk walking (but no running) for the first few days. Now he's been here a week, it was time this morning to get stuck in (plus I haven't run at all since my 7 miler on Monday last week - my shins started to hurt so I took some extra days off)

Back to the dog, I let him wee umpteen times during the warm up walk, but it became apparent that he wasn't going to keep up while off the lead, so back on his lead, we set off at a very slow jog. 20 minutes later (and it wasn't really much faster than our warm up walk) we cooled down and then I let him off for some free sniffing and racing around madly.

It went well, I will have to keep him on the lead though, he's hopeless at keeping up otherwise. It seems he doesn't mind water and mud, which is handy, as the commons are full of them

Am too tired to post more, it was fun. I did get rather fed up with people asking why he is pink though

He's not my dog, it's not my fault! Bit of a short run for me, but better than nothing and, in any case, it's my birthday, I don't HAVE to run very far 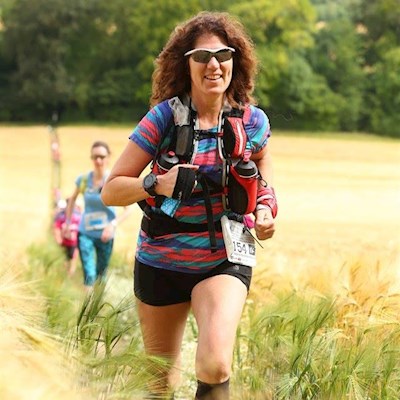 vixiej
Graduate
To view profiles and participate in discussions please or .
13 Replies
•

There can be little more lovely than having a dog, run to heel, off the lead.

Yes, it was lovely to have a dog to run with, fun

I'm looking forward to him getting fitter so that I can go back to my normal runs (I suspect I will still run once a week without him, in the meantime)

- I guess it was yesterday? Anyway, I hope you had a great day.

Erm... I do remember you saying bits of him are pink, but I don't remember why. Why would anyone...?

thanks, yes, I had a great day

He's from California, they are all dyed out there, they've just moved back to the UK. It is harmless food dye, so not really an issue for him, but I've found myself constantly apologising for it and explaining that 'he isn't my dog!' He doesn't care what colour it is and it doesn't make him a wuss, he told off a 2 year old staffie the other day, who got a bit too enthusiastic

Don't tell me your friend dyed him pink! When I was growing up on a farm we had a big white sheep dog who found and rolled in some sheep dip and was pink for days in spite of doing our best to wash it off. My Dad's friends gave him such a teasing about having a pink dog! Not really the thing for a rough tough farmer! I suppose it's quite suitable for Valentine's day - you could hire him out - maybe attach a rose and a mini box of chocs to his collar and do deliveries

vixiejGraduate in reply to pingle

damn, I wish I'd thought of that, I could have made a fortune!

I can imagine your dad's horror. I was brought up on a (dairy) farm, it's not really the environment for pampered looking pooches

Happy birthday for yesterday! How long have you got the dog for? You are a very good friend to someone! It sounds like a lot of fun, although I can see you're going to want to do a few runs without him as well. If the pink is too much could you dye that bit of tail black over the top? Or would that look even worse?

I will for sure do some runs without him, as I want to do 5K in less than 30 by the end of Feb and I haven't really had it front of mind for quite a while (I just looked at my goals sheet today!). He's a white dog, so the pink shows up, but it's actually very faded - he's going to be re-pinked when she returns

As for the pink, I don't really mind, to be honest, as I know that the important thing is that my friend looks after him really, really well, and she would not go on a trip without ensuring he has someone to look after him equally well. I was tempted to dip him green (for a change) but this stuff lasts for ages, so I won't do it. I'll just keep covering it up with mud on my runs and then give him a shampoo and set the day before she collects him

We've been hankering after a dog for some time, but we're not really in a position to have one full time, as my future work/life balance is a bit uncertain (I won't have one unless I can look after it and be there), so this is a nice way to have a dog for a few weeks. He adores my daughter and goes crazy when she comes home from school

I hadn't realised when you said 'pink dog' you actually meant *dyed* pink! My mouth was gaping open when I worked it out! (I thought you just meant it had bits with no fur!) How funny.

Running with a dog does sound rather good. Good luck with the speed training - for him and for you!

I don't think I could go out with him in public when he's at his 'pinkest', but he's pretty faded right now (and I brushed a lot out earlier!), but I have seen him really, really pink and there is no mistaking it is dye.

I do hope he enjoys and makes the most of his foster mummy, he's one lucky tail wagger for sure. Please take a photo of him so we can see him in the pink!!!!!!!!!!!!!!!!! Just tell everyone your a big supporter of Cancer Research and he's part of your advert.

what a good idea about the cancer research! They might even donate

He's quite faded, but I will try to capture it, or I'll ask my friend if I can post a pic of him when he was freshly clipped and pinked

Looking forward to seeing him if she says it's ok!

Running with the dog

I used to run (badly) years ago and would like to take it up again, this time with my dog. I’ve been

Runs without dogs - the Exploration Game

Not just me without a dog, but my running buddy from down the road running without either of her two

Bracing run/walk on the seafront with George-dog :)

and ready set off to seafront! wow, it was REALLY blowy on the way out! did warm up walk , then ran...

Running with your dog

anyone else run with their dog? Willis (the dog) and I will have completed week 4 today and running...

Been told off for running where the dog walkers go!!!

no business running where the dog walkers go. I told him it was his duty to keep his dog under...