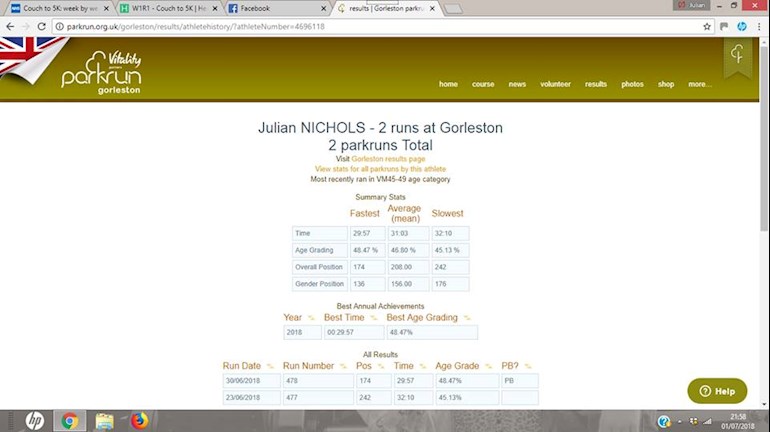 So last week I completed my first park run since graduating C25K and I was sooooo pleased to have done it, YIPPEEEEEEE!

Damn, blast, oh dear never mind, better luck next time eh! All the nicer things/words that could have passed my lips, but didn't. I don't think this is the right place to put the words I actually said, you lot are far to nice and delicate for that kind of language.

So, Saturday morning comes around again and following pretty much the same routine, I head off for PR2. Now here is the spooky bit. I cross the line and hit stop on my watch, not looking at the display, (needed a couple of seconds to get my breath back). I then look at the display . . . .29:55 (AGAIN!!)

After the events of last week, I now have no faith in my Umbro time piece at all. I am convinced the stop watch only goes up to 29:55 before getting stuck. So now I have to wait for my official time from parkrun.

So there we are, two parkruns in and I am officially under 30 minutes. I know its only 3 seconds, but as far as I am concerned, it's a new world record - move over Mo, there's a new guy in the park! (Sorry Sir Mo Farrow, you are a legend and I'm only joking).

Fantastic well done Julian. I think the 1st sub 30 minute 5k is worthy of world record status. Might be time to retire the watch though 😀🏃‍♂️🥉

Seriously considering it Alan, I give it one more chance next week. If it says 29:55 again I think I'll get a priest in to do some kinda exorcism on the damn thing.

Stamp on it. Bury it. Sprinkle salt on its grave. Then jump up and down and shout "Hallelujah". That normally works best.

You've had an Umbro watch too sallenson! Ha! Ha!

I thought about tying it to a rock and throwing it in the river. But then I remembered the damn thing is water proof all I got was visions of the closing scene of Deliverance, but where they had a hand rising from the water, I could imagine this blasted watch strap rising up from the depths!

And if you bury it you get the classic scene from end of Brian de Palma's Carrie, or else a complete re-enactment of Poltergeist because you've inadvertently disturbed a Native American Burial Ground.

Life is full of tough choices!! Those of us with OES need publicly-funded support and recognition!!

Cheers Jay, was so up last week after thinking I'd cracked it. Up even more this week to know I have - bloody hard work though and I mean bloody hard. The 16/17 minute guys make it all look so easy.

Jay66UKGraduate in reply to Julian1970

Julian1970Graduate in reply to Ashley0304

Thank you very much Ashley. Would never have achieved it without C25K!

(Pat’s virtual back and hugs in a virtual manly way!)

A bit higher my friend - that wasn't my hand

Might need a Garmin for the 10k Lounge, I'll probably get lost without one!

LoungeLizaardGraduate in reply to Julian1970

Ha! Ha! Now quickly, back to the beer, football and killing small defenseless animals with a high powered rifle and other MANLY pursuits GRRRRRRRR!

Is this some Julian/Mitch bromance that we've wandered into?

Did I mention, that to his friends he's known as Loungesnake ;D

Thank you Saartjie. Really pleased, but the hard work is keeping like that.

Sometimes parkrun times can be a little bizarre, my wife and I crossed the line together on our first, the official result says i beat her by over 3 minutes 😆 not sure it that means I did her slower time or she did my faster one 🤔

Now go and get a proper f*in watch.

You deserve one since you are an Afflete.

And also a happy and thoroughly delightful human being!!

D'you fink it would be a bit showy doing the parkrun in a Rolex, sorry not a Rolex, I mean a Timex?!

I think an Ebel would be a bit more classy...

Or some form of sun dial?

A sun dial with a second hand, now that would be posh!

And you could use it to smash into people who come up alongside and might want to sprint past. Like some macho-tech version of Zola Budd and Mary Decker

That Zola Budd trip was world class. Some would say it was bare faced cheek, but it was more bare footed cheek I think.

Well done. I absolutely love Park run, I've found times arnt completely accurate especially if you start toward the back. On the bright side you probably ran even faster than 29.57.

An app i use is STRAVA it records time distance and pace. It also maps out a the coarse you ran.

Julian1970Graduate in reply to Luken

True Luken, I think the start time is taken from the time the first starters set off. You can easily lose several seconds, if not more if you start near the back. At least I'm hoping so, so going to get nearer the front next time.

Think ELBOWS. Think SUNDIAL. Take a pair of matched Purdies or an AK-47 for the really troublesome...

I was thinking more along the lines of the James Bond film where the wheel hubs extended and cut all the tyres of the other car? Is it possible to fit those to your running shoes . . . . ?

Thank you very much Ripcurl

A belated congratulations from me! A serious whizz! Well done you!

I'd take that. Every second counts! Well done! 😁

Julian1970Graduate in reply to Hidden

Thank you Sutsha, looking forward to the next one tomorrow

injuries as i know that you are only supposed to move up a few minutes at a time , but i was...

my final Post Grad run at Croydon Parkrun. 🏃‍♂️ My unofficial time, courtesy of Strava was 33:57,...

way around Crystal Palace park. Sunday: woke up to glorious sunshine and only slightly achy legs,...

I have got a fair few things on this week in the evenings so may only...

Post-grad runs on the treadmill

outside but obviously not as I only did just over 2.5 k in 30 minutes! Horrendous! So, tonight I...