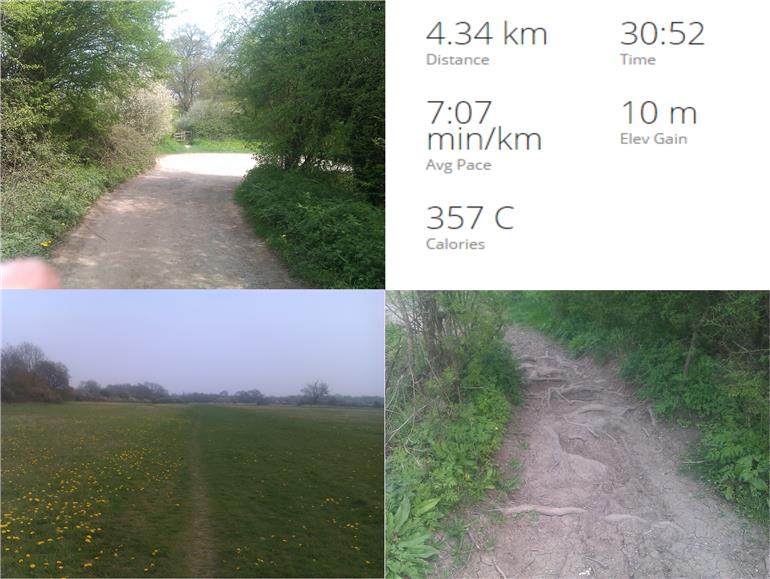 After a great run on Wednesday which was my longest and fastest to date, I wanted to remove all temptation to overdo it by running too fast today and headed out into the countryside.

As you can see, it isn't exactly Amazonian jungle or the Himalayan foothills but this gentle rolling landscape is a very pleasant place to be at this time of year.

The run itself was good, I ran 'naked' so, for the most part, the only sounds were me puffing/wheezing and the birds chirping away. I did attract the ire of a clearly upset bumble bee who 'chased' me away from it's source of nectar. I can't be too sure of the distance but I reckon it was buzzing around me for a good 30 seconds.

The route was quite 'easy' with the only hazards being thorn bushes, brambles and couple of sections with lots of exposed tree roots but with long jogging pants and some care and attention it was basically fine. I will say though that running on this type of terrain is more tiring than running on tarmac, both times I have done trail runs, I have really felt it despite the pace being a gentle lollop.

A quick word on my shoes (I posted the photo not too long ago). Absolutely great, no problems whatsoever and a bargain at the (still available) price of £25. You do need trail shoes for this type of running, you can feel the improved traction and the much stiffer sole is a must for hard, rutted and uneven ground. With normal road shoes I would be very worried about twisting an ankle. 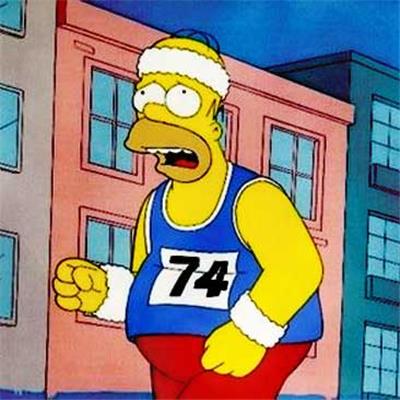 Dunder2004
Graduate
To view profiles and participate in discussions please or .
Read more about...
21 Replies
•

That looks an ideal place for a run! Splendid. Wide open spaces, no cars. Bliss. You just have to watch your foot placement and keep an eye on the path ahead, which can be tricky. fun though!

Sometimes keeping eyes on the path ahead doesn't help missw. I managed to clatter my shoulder on a tree limb which I saw as clear as day. I did lean to avoid it, just not enough - doh!

Dunder2004Graduate in reply to jules50

Nice pics Dunder2004, & I did right choosing trail shoes (NB £10!) then, knowing a lot of routes for walking I was hoping to head for the hills rather than pounding overcrowded pavements. I save the 3rd run of my week for the more adventurous routes as I know by then what Laura has in store.

Good for you Mrs T.

Going forward I expect maybe one in three of my runs will be on the trails, I am lucky to have a good selection of routes on roads/pavements which are not too busy.

What a lovely place to try out your new running buddies. The tree roots look like a real challenge but you still had a cracking good pace! Glad the bee buzzed off. That green field looks particularly inspiring for a trainer-clad take of 'The hills are alive"...

It's actually their second proper outing mfam, first one was on Sunday on a different but similar route. There's nothing quite like turning a corner and seeing a long expanse of green ahead. I could have screamed "The hills are alive" ** at the top of my voice and not a soul would have known.

** Actually I couldn't as per previous discussion about oxygen!

Ooh looks lovely Dunder and those tree roots look like snakes so it could be the jungle!

This site only allows to upload one photo so I had to put them together in the collage type thing in some photo editing software.

poppypugGraduate in reply to Dunder2004

Oooh that's clever, Ive always wondered how you do that , collage wotsit thingy

Hi dunder, lovely pics, I'm hoping to run around similar looking routes later in the year and wouldn't have even thought of trail shoes..... But any excuse to buy some new funky ones is absutely fine by me

thanks for the tip!

Dunder2004Graduate in reply to juju656

Road shoes are fine for lolloping around sports fields and the like but, as mentioned, I would be very nervous with them on uneven ground.

I am still very much a beginner but would highly recommend doing at least some of your runs on trails, if you have the opportunity.

It really help getting advice from people in the know, I will def do that. Thanks again

Fantastic, and that path looks so inviting what a lovely trail... Well done you are doing so well

Dunder2004Graduate in reply to ju-ju-

Thanks JJ. Just the small matter of 38km more to match your feats LOL.

Excellent photos and fantastic running! I am going on my first outside run W8R3 on Monday, so I have read your post with interest. Also I am still clock watching, but running on a treadmill is quite boring, so maybe being outside will help.

Well done Dunder, you are an inspiration.

Clock watching is to be avoided I think. I try to think of anything but how much time is left. Must be hard on a treadmill when it's right there in front of your face.

Good luck with running outside, I guess it will be quite different to the treadmill.

That looks lovely. Please could you remind me of the brand of shoes? Some of my runs here are a bit lumpy and bumpy, I'm wondering if I need trail shoes...( or an excuse to buy some new kit, I haven't bought anything for over a week!)

Mine are Karrimor Tempo 3 Trail. There is a women's version which I know Misswobble was also very happy with.

Curlygurly2Graduate in reply to Dunder2004

Thanks I'll have a look xx

that all trail shoes are neutral, am I risking my knees by switching from a stability shoe to a...

I hope all my other 'virtual' running friends have/had a good 1st run, and I look forward to reading

Tough one this morning. These morning runs don’t suit me at all. Middle third was again really hard...

What should have been a really uncomfortable run was chilled and actually quicker than usual...

28 minutes of running? Me? No way! Well actually YES way and it felt fab. Had to come off the...