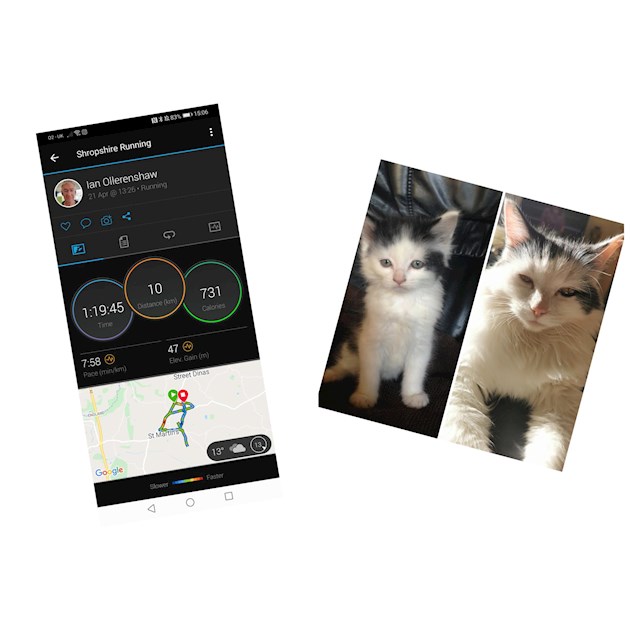 So my last run was a short one of 3.5K , so today was either going to be a 5K or a longer run so I set off not really sure how far I was going to run .

I wasen't even sure what to wear on this one as it was quite dull when I went out but I opted for shorts and a short sleeved top.

I actually felt a bit chilly as I left the house on my warm up walk but soon after starting to run I was just fine !

The toxic 10 was there at the start so that didn't help me decide how far to go but at around 10 or 12 minutes I was feeling more settled.

It was feeling good at this point but I had absolutely no idea what my pace was like as I had not been watch watching , just counting the 1K Buzzers 😁

Luckily, I also know the route very well so know how far I have run even without my watch 😁

At around 8 or 9K I was noticing a very slight ache in the bottom of my back , nothing much but just something I was aware of so decided almost straight away that I would not push on past 10K.

It didn't get any worse so I just kept the pace low and plodded on to complete another 10k.

So back home , drink water , stretches done and a big mug of tea 😁

Oh, I recently found a picture of Misty my cat which was taken at 7 weeks old , the one on the right is now almost 7 years old 😁😺

Well done Ian, another nice 10k under your belt 👍🏃‍♂️I went out in a short sleeve top today too and found it a bit chilly until I’d warmed up. My eyes and nose were running, I looked like I was crying 😭.

And your right , Misty is spoilt rotten 😺

A solid 10k there Ian. Well done, but watch that back. Hopefully there's no lasting after effects.Your cat looks cuter now than when she was a kitten 😺

Thanks , and for your concern 👍If feels fine now to be honest so fingers crossed 🤞

And yes, Misty is very cute 😁😺

Birdlady64Graduate10 in reply to Instructor57

Yes not too bad thanks. I spoke to my Physio on the phone yesterday evening and felt pretty upbeat about things afterwards.

Birdlady64Graduate10 in reply to Instructor57

I'm really sorely tempted now, but he said to wait a couple of weeks, so maybe in about 5 days time?

Ahh ok , ok I'm sure it will be worth the wait , so glad your on the mend though, we are such complex machines really aren't we 😁

Oh your photos make me want a kitten oh dear, But the run is impressive, I love those decide as you go runs and hope to get back to one soon

Haha, yes she is an adorable cat 😺😁And today's run was always going to be a 5k or more , just decided whilst in motion 🤣🤣🤣

That’s good to know that you feel ok now. My old cat ran over the rainbow bridge early February and we miss him so much

Oh no, so sorry !I lost the one I had before this one and I was without for ages , I said I wouldn't have another but then I couldn't resist 😁😺

Well, you can look forward to that then 👍😺

Well done, Ian, a great 10K under your belt! Good, solid run. I like deciding as I run what the distance is going to be! You did the right thing in taking care when you felt that back pain.

Instructor57Graduate10 in reply to Jools2020

Thanks Julia , yes i like the make it up as you go runs , my last run was short so today needed to be either 5k or longer 😁.and yes , I won't push it , it was only a slight twinge , nothing much but I'm very conscious of the twinges these days !I'm fine now 👍

Hope your getting settled in now ??

Another nice, quite comfortable run Ian, hope that back pain keeps quiet, we have a very similar pace i think, unless your holding back on it for now. Great to go out, and just see how it goes before deciding how far to run, and still sounds strange for me, saying oh, might do a 10/12k today 🤔 my longest for a while has been 7, really need to get a 10+ in soon!

Instructor57Graduate10 in reply to Peter44

Thanks Peter 👍And no, I'm not holding back , that's really about my natural pace , though I do try to keep the longer ones a little slower .

I've wanted to get back to 10+ for a while now my longest was12 and that was quite some time ago now !

Instructor57Graduate10 in reply to Peter44

Oh, and yes the back/hip is fine thanks 👍

Peter44Graduate10 in reply to Instructor57

Great run. I think it’s the best idea to decide as you running how far you will carry on. I’ve only ran 10k twice. I can’t decide if I enjoy 10k or if it’s just the challenge I enjoy🤔

Instructor57Graduate10 in reply to Dups

Thanks , yes I know what you mean about enjoyment or challenge 😁

Nice cat pictures instructor57 and nice run by the sound of it. Shame we have to contend with the toxic bit at the beginning. Sometimes I think it influences me to do a shorter run than I should but, at the moment, it's just good to get out in decent weather.

Thanks, and yes , the weather's certainly helping 😁👍

Well done on you run again and smashing time. I’m out this morning. Should have gone yesterday but sang and played guitar and recorded instead.😮🎤🎧🎸 So to day will be the first run of the week for me.😀😀

Thanks , ooh I sometimes have guitar and recording days 😬👍

I sing and play etc most days. What’s your genre ? Mine is folk and I like to sing Robbie burns . Also I have a tendency to put my own take on some songs.😀

Now63Graduate10 in reply to Instructor57

Nice guitar! I have only two. Both Fenders. One of which is electro acoustic guitar. Both of them are parlour guitars.

An image of pure music joy with guitars ,amp and mic .

Toxic 10... love it. I’ve not been running long but I’m glad to hear that this is quiet common. I thought it was just Me!!!

Yes the toxic 10 is well known and very common I runners , Google it 😁

Tansycat in reply to Instructor57

Ooh right , I will

Thanks , it's the same cat of course taken 6 years apart 😁

Well done, that's another 10K dusted and done. Good for listening to your body. Make sure to rest sufficiently. And such a cute kitty-cat. I have 2 myself, a 15 year old and a (guessed) 12 year old.

Aww ... I love a cat picture! And congrats on your surprise 10k. Just goes to show how your mind can adjust even during a run. When I'm not really in the mood, I'll remember this post to remind myself anything is possible!

Instructor57Graduate10 in reply to 58soon

Haha, yes I always love a cat picture 😺I'm beginning to enjoy making my mind up as I go now , it seems to work for me .

I tend to go out with a minimum distance in mind , that way I'm never disapointed 😁

deliberately kept the pace low as I wanted to do a longer run , I had just not decided how long !!...

Saturday and 10K in the sunshine ☀️

I never thought I would be posting this - another 10K! I’ve run at least 6 now, and loving that I...

I had done around 4K when I decided I would run for at least 10.

still been getting short runs in. It settles really well once I'm into the run so I've just been...

An Afternoon Run to Blow Away the Cobwebs

breakfast and go for a no-pressure run around lunchtime. It would be nice with no need to get back...