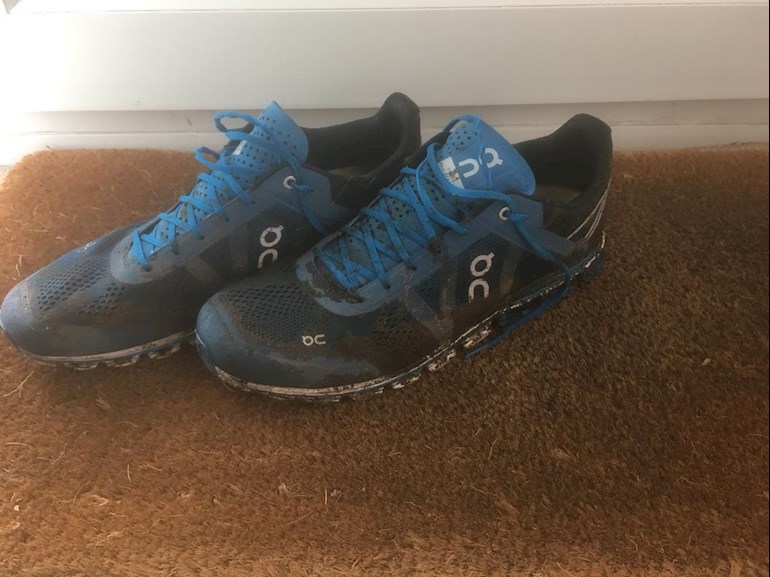 Well today was going to be 5k... or maybe 7k. Given the torrential rain we’ve had over the past day and a half, at the 2k mark I gave up and headed back. I’m a runner, not a long-jumper, or even a swimmer

My poor clouds still hadn’t recovered from my Lyme Park jaunt. I’ll let them dry and brush them off later.

I also tried my controversial positive splits technique! Basically because I can’t stand wearing layers when running, and having to take them off, I set off like a rocket then I’m nice and warm very quickly. The downside is a tendency for the tank to run dry too soon

still, first k in 5:47, the next three were slowed down by having to circumnavigate mini oceans, and the last 0.4k was still sub 6/k which I was pleased with.

Well done on your run, Neil, but you know I am going to chastise you on your “positive splits”, right?! 😂 The point of negative splits is that by the time you ramp up the pace your muscles are warm. Warm muscles = good. Less likely to break something. Doing it the other way around is BAD! Tsk!

Am with you on the mud - hate it, absolutely hate it!

No no no please don't, you're rather scary when you tell me off!!! (still love you though

I wasn't actually being careless though, this was a well thought through plan. I had done a long session of stretching before I set off, not leaving until I was happy with the range of movement in my legs. My legs are generally stiff, but respond really well to stretching. Also I only set off at my normal pace, the difference being this was intentional! I always set off too fast despite my best efforts

I was happy that the final half a k was also sub 6 minutes, so I did kind-of manage negative splits - sort of, even if the first one was positive!!

Seriously though, thanks for caring!!

Yeah, I’ve known you a while now, and learned to appreciate your “tough love” 😘

I honestly can’t wait for my Garmin at Christmas. I feel like a kid again!!

Mud is great... for the complexion

Did I ever tell you about when I went for a run last winter, slipped in the mud, and came back covered in it?

Don't worry, see my message above to Sadie, but I promise I was careful. I also did my fast bit on the newly renovated section of towpath, which is basically made from crushed slate, and has a little give in it, it's a joy to run on actually, much nicer than tarmac, and also no potholes yet. As I mentioned to Sadie, I did LOTS of stretching before I set off to ensure that I had a range of movement in my legs that I was happy with, plus also a decent brisk warmup walk. And also, to be fair, I'm so bad at negative splits, I always do this anyway, just this time it was on purpose

Hi Neil, I like the new mountain goat profile pic by the way, 🐐 🏔 Suits you sir!

I also admire your unique thinking on positive splits to avoid over layering 😂 not sure that one will catch on... but it does look like positive splits are actually used in racing, obviously after being sufficiently warmed up beforehand 😊

Well done for getting out there and doing some puddle hopping on your speedy 4.5K ⚡️

Thanks Thunder! Not sure the mountain goat will stay, but it's got to be better than the profile pic of me looking a bit like an axe murderer. Yes, I'm not sure my layer-avoidance technique will ever catch on, but it worked for me today. Thought I'd give it a go as today was supposed to be a tempo run anyway. I actually did the same thing on my very hilly 10k, but at a slower pace. In fact, I didn't need to change anything from normal for that, I knew the insane hills from about 2.5k would slow me right down.

You ran, so good on you. I start off fast too.

Pack your shoes loosely with newspaper and they will be dry tomorrow. I have On trail shoes, which are worth their weight in gold in the wet and mud, are slip free in frost and are still nippy and fast on roads. Having more than one pair makes sense, not just for rotation but so that you always have a dry pair. An expense at first, but you don’t have to replace them as often, so no more expensive than one pair in the long run (no pun intended!)

Thank you dear Flick! I think you read my mind, if I can afford it, I shall treat myself to a pair of the Cloudventures for Christmas, possibly the waterproof ones, given the scale of the puddles! My colleague at work has a 25% discount code for onrunning.com as part of the cycling team she's part of

Lucky friend! I would consider seriously about the waterproof ones. Water can’t get in till it goes over the top when you step in a puddle - then it can’t get out! Or so I read in a running post somewhere. But anyway, I have the Cloudventure Peak and they are my favourite of my three pairs of Ons. I was going for the standard Cloudventure but they didn’t have the khakhi green ones with the pink lining (how vain am I!). I’m sure they would have been equally brilliant.

I do sort of positive/negative splits. Start of keen, mind starts to wander, pick my feet up a bit, try and finish well.

in reply to SlowLoris

Yes me too - I do that!!! I did that today, but the slow bit in the middle was because I don't move that well through thick mud

I do let my mind wander though and my pace drops, but I can pull it back if I put my mind to it... usually!! Hey I'm still learning about this running lark!

I don't blame you giving up on that one neil. just think of it as a postponement. Listen to the ladies below, you know it makes sense......

That’s ok Neil, you earned the right to cut that one short. Well done for attempting it in the first place. 👏👏 Your shoes will be ok and scrumpled up newspaper will help get them ready for your next outing. 🏃🏃

Well done getting out in the mud Neil. Have to admit I like to get warm quick, but as starting to run too fast seems to doom us to IC possibilities, have you tried other methods?

I sometimes try high legs / slow long lunges/ side steps / kicking feet up behind me without really moving far until I’m getting warmer. (I hear roseabi likes burpees! 😂) Have to admit I then now usually start with a very slow jog (almost on the spot) rather than my C25k warm up walk, just because I’m too cold to walk in my running kit!

I also did some serious puddle/mud dodging on my stretch of towpath yesterday! Was worried about slipping and ending up in the canal at some points 😂

and cleaned them yesterday. They are 11 months old.

Apart from scraping and brushing off dried mud,...

got to run almost 3 x this next weekend\\\". I did eventually manage to silence them, telling them...

degrees when I set out this morning for my first run of the New Year. Having seen 2020 out with a...

Parkrun - a wet and muddy pb!

knocked off one minute and one second, despite having to slow down and pick my way through a few...