Rash at the moment: Can I ask for thoughts on... - Vasculitis UK 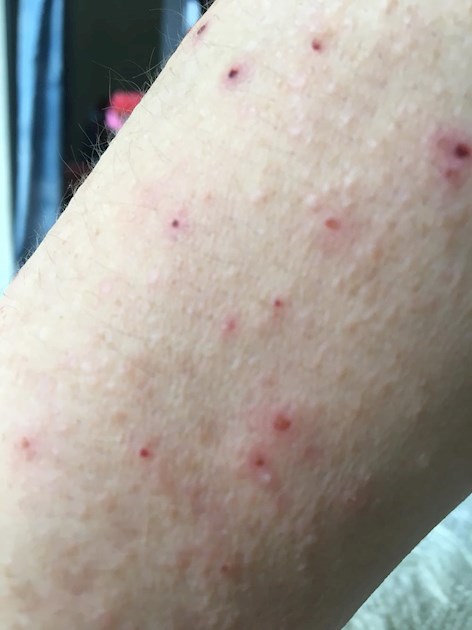 Can I ask for thoughts on this rash on my arm at the minute?

It's the same, but less severe, on my side and my thigh where they took the biopsy from in July.

I have a dermatology review on 25th September but no contact from rheumatology yet, despite the consultant being back from holiday for 2 weeks now and having had my results sitting for 3 weeks and having been copied in to the dermatologist's letter 10 days ago and despite calling his secretary 3 times.

This rash and the itch is driving me insane but I'm wishing it was time to see the dermatologist at least!

Antihistamines are doing nothing and steroid creams minimal relief. I have Dermacool, but can't use it on broken skin.

I'm demented and embarrassed - I wear a short-sleeved uniform at work and I'm going to have to start wearing my cardigan. It's a hospital, so I'll also roast alive 🙁

I'm almost at my wits' end!

Have you tried Telfast antihistamines ( they are only available on prescription )?

Might be worthwhile asking if your GP is willing to prescribe a short course of prednisolone tablets ( even 7 days ) to see if that makes a difference.

kazmac45 in reply to Hidden

Yep, that's Fexofenadine and I already had that ( I also use it for hay fever). I even had it prescribed at an off-licence dose. Made zero difference 🙁

They wanted me to use the steroid creams rather than meds. However in 2015, I felt like a million dollars after 3 months of Prednisolone. It was the most 'well' I'd felt for years.

Try Dermol 500, You can buy it, or get it on prescription, Use it as topical, or instead of soap.

kazmac45 in reply to Hidden

I have both Dermol and QV products on prescription. I've been using them for months xx

Don't suppose staff health could help at all? Do they prescribe. Would your Dermatologist prescribe the prednisone for a week see if that helps?

If still the same then all I can think of is topical Local Anaesthetic (Lidocaine, Germolene if not using the steroid cream as u/s) and cardigan ??

Hi Kazmac45, Have you been tested for Shingles? I have had it 2 times, and it is itchy and painful. Best of luck!!

Hello, are you feeling better yet? I am going through something similar... Skin is very itchy and produce red bumpy/raised rash when scratched... It was really difficult to resist the urge not to scratch it (which made it worse) until it bled and my skin was left dry and flaky. Took steroids which worked like a charm only to realise that long term use of it can lead to more serious complication (secondary adrenal suppression, (extremely) slow wound healing and might also induce diabetes)... However, I tried this thing from GNC lacworldwide.com/masquelier... and it was like a miracle, the morning I wake up the bumps are gone! Maybe you can benefit from this product. I was wondering what product helped you heal? And what was the diagnosis and cause? Is it allergies? Damaged blood vessels? Or what? Because the rest (other scaly bumps which are not psoriasis btw) are still there and the wounds which used to bleed have a hard time scabbing (fragile)... It would ooze out yellow stuff and I don't know what it is and what to do now

I really appreciate anyone who can help with my situation and guide me to getting my healthy skin back. Thank you!!!

I still have a mild form in my hands and I've had the GI bleed and all of these symptoms have...

Feeling a bit disheartened at the moment...

disappointed with this, given we're now just a month away from the event, and for some of these...

Advice on blood tests at the moment

Vasculitis. At the moment his biggest problem is a rash that started just after Christmas on his...

including a rash, speckled with nasty red spots, that has covered me from head to foot! The clinic...