Heat pads to relieve pain.: Hi there not a question... - PMRGCAuk 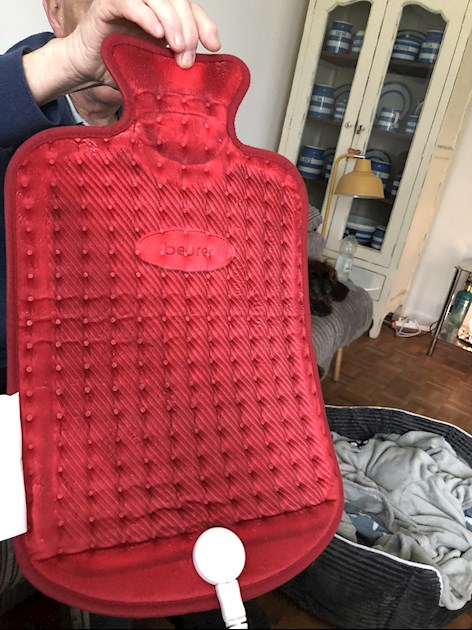 Hi there not a question but thought I would share with you my experience with regards to heat pad.

It’s quite large and will actually cover both my shoulders at once .

It’s electric and warms up so quickly.

This has given me great relief ,especially in a morning when my PMR seems to be at its worst.

It’s so convenient, just plug in and place it wherever the aches and pain are.

I have gained so much knowledge from this site and am grateful to have found it.

Hopefully this may help others.

Looby60
To view profiles and participate in discussions please or .
23 Replies
•

I have a heated pad my husband bought me when l was on Chemo to ease the bone pain & l do use from time to time.

Hubby has just brought me a hot water bottle up with my morning cuppa for the pain in my back & leg - very cozy it is too.....

Warmth is a great comforter.....

You have a real treasure there. 🌹

Feel better quickly. You have Christmas round the corner.

I have a hot shower before going to bed. Just before getting out of the shower I turn the heat up as high as I can. It certainly helps

I am normally too hot, but pmr has converted me to an electric blanket which I would rather have than heat in the bedroom. Also use a wheatie bag that can be heated in microwave, but better fitting heat pad to go across shoulders sounds great.

Looby60 in reply to herdysheep

Best thing I have bought in years well worth the money 👍

My big failure with Wheat Bags is ‘Over Heating’ them.....

Looks like my hot water bottle - nothing high tech but works a treat sitting against it nestled in cushions. I only need it for sacroiliac joint pain. Shoulders are mostly fine.

Looby60 in reply to PMRpro

I feelYour sacroiliac joint pain and don’t know about you but heat is the only thing that eases mine when it’s bad .

PMRproAmbassador in reply to Looby60

My emergency go-to - has kept me out of the ED a few times.

Looby60 in reply to PMRpro

PMRproAmbassador in reply to Looby60

I need the anti-inflammatory effect. I can't take codeine - makes me ill ...

Mama48 in reply to PMRpro

I think I read that you have atrial fibrillation. If that is the case how are you able to take ibuprofen.? I also have AF and am on rivaroxaban for life. I have been advised that I shouldn’t take anti inflammatories , risk of ulcers and bleeding. The only pain killers I can take are paracetamol or codeine. There are times when I think anti inflammatories would do a much better job.

PMRproAmbassador in reply to Mama48

I don't use it regularly, just very occasionally, in extremis so to speak.

I'm on Pradaxa and I and the King of the local hospital lab did lots of tests to see what my blood level was after my husbnad nearly popped his clogs due to rivaroxaban given together with a heart drug causing blood levels to have reached 10x the level they should be. The same applied for the anti-arrythmic I was on. Luckily it is his hobby horse and the first thing he had done when the NOACs came in was to get the testing kits for all if them - all patients here are checked before surgery because a lot of them turn out to have such high blood levels they need 2 or 3 times longer pre-op for it to wash out. Now I am on the lower dose and always taken separated from the other drug by more than an hour. The odd dose of ibuprofen isn't going to do much harm. But there would be far fewer problems with bleeding if they tested and adjusted the dose appropriately - a study was done, it is known, but the manufacturers would lose their USP of "no testing". How anyone could ever accept that a single dose was going to work perfectly for everyone is beyond belief.

I love my hot water bottle or ‘hottie’ as we call it. Even when I’m not in pain I find it comforting just sat watching tv ! 😃😃😃

I too love my heating pad for my neck and shoulders at night (with an automatic shutoff). That looks like a good sized one and love the colour. Thanks for sharing.

I’ve just bought a heat pad which slots into a belt around my waist and fasten with Velcro. I heat it in the microwave, it’s great for my back pain and I can walk around with it on. Got it from Amazon and very pleased with it.

What a good idea . Is it bulky or discreet .

It’s not too bulky, I can wear it over skirt and jumper fits over nicely ( I’m not a small lady thank goodness there was an extension on the Velcro! )

PMRproAmbassador in reply to AMG38

AMG38 in reply to PMRpro

Hotties soothing backwrap microwaveable heat wrap for the relief of lower back pain £21 .99. Sorry don’t know how to send photo of it!

PMRproAmbassador in reply to AMG38

AMG38 in reply to PMRpro

degrees brrrrrr. I have got my electric heat pad out again, my knees and shoulders/neck are so sore...

I’ve kept using the Tylenol with the heating pad but turned up the heat as high as I can stand it...

Arthritis pain not relieved by Pred.

patch as well as cocodamol, for pain relief. Most of my pain from PMR has gone but the Pred is not...

At this point in my PMR journey fatigue and exhaustion are my primary complaint. I started on 15mg...

Bilateral rotary cuff in shoulders after coming off pred....

Is it worth taking Methotroxate when on a low dose of predni...