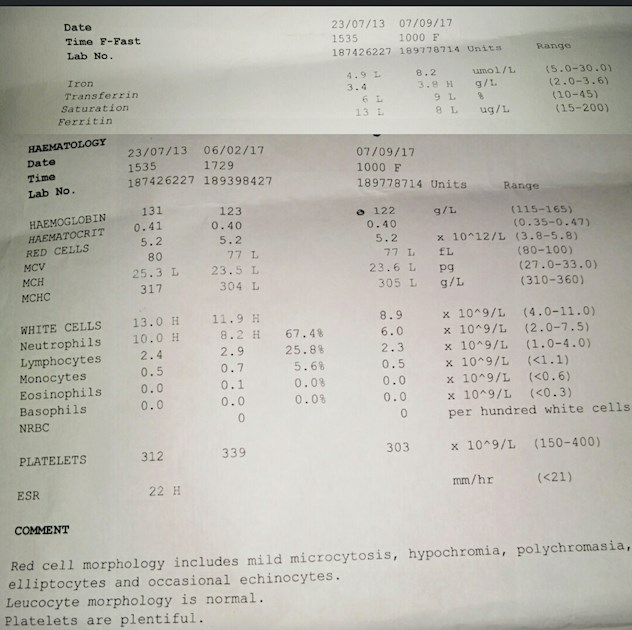 Hello everyone. I've got my results for Iron and B12 and appear to have a deficiency in both. When my Dr was explaining the number results it was all medical jargon. I'm now taking a more keen interest into the details of how low is low when it comes to my results. Trouble is I'm finding a hard time understanding and would like to ask if anyone out there who knows how to read blood test results could take a look for me?

I'm getting more serious than ever about my well being. I'm also on the anxiety group of this forum and someone opened my eyes how interconnected it all is.

Hi Clarita83 post your test results with ranges <from - to> here

and the units - there are two sets of units that are used - so sometimes comparing test results over time just on the basis of figures alone can be problematic.

Clarita83 in reply to clivealive

Hi there. I don't know what I'm looking at with the results so I've gone ahead and updated my post to reflect a photo of my results. Note that the Dr printed it to show previous tests from years past, too. The most recent result is the far right, it's clearly dated above the results. This is for the iron.

As for the B12 it only shows this

I hope that makes sense.

Clarita, please take a look at the information in the pinned posts

you may also find it useful to look at the PAS website. to learn a bit more about B12 deficiency

Hi again, sorry I posted a reply to you that was meant for the previous person.

I made an appointment with my Dr for next week, a follow up of sorts. Is there something you think I should bring up with her that might help me? My eyes are being opened here and I think I must use all the useful information to get the best help. I had asked for hormones to be checked but she said I was too young to worry about that.

I appreciate you taking your time and sharing your story with me. I hope to get this under control. I wonder if anything else is off inside of my body.

One thing you could ask about - if getting to the surgery is a problem - would be the possibility of self-injecting. I understand that you are currently in Australia - although the treatment regime there is very similar to the UK injectable B12 is actually an over the counter drug rather than prescription only in Australia (though surprisingly there have been reports of pharmacies in Australia that weren't aware of this - and I think getting hold of needles might be a bit of an issue). Injections tend to be given IM (intra-muscular) but can be done subcutaneously - which you can do with an insulin needle.

If you have neurological issues then you could ask if there is a more aggressive treatment regime.

It would be useful to compile a full list of your symptoms and also to monitor how symptoms change (both for the better and for the worse) in relation to loading doses and maintenance doses).

The form of B12 used in Australia is hydroxocobalamin (I believe), whereas the type used in US is generally cyanocobalamin.

You could ask about testing for possible causes of absorption problems - PA, coeliacs, h pylori.

If you experience symptoms like acid reflux then that could be an indicator that you have low stomach acidity (the symptoms of which are more or less the same as those of high stomach acidity). This would probably point to PA as the cause - though the test for it (IFA) tends to produce false negatives 40-60% of the time depending on the exact test method - so a negative would be a long way from ruling out PA.

You could discuss looking for other things though to be honest I'd be inclined to give the B12 a while and see if any problems remain after that before jumping in to testing everything under the sun.

Looking at your blood results - you have microcytic anaemia - from the iron deficiency. Your serum folate is very low if the result above is correct - may be that red cell folate wasn't done as it is an alternative test - so you need to ask about supplementing that as folate and B12 are used together in a lot of processes so you won't get the full benefit of the B12 unless you have adequate folate levels. Usual recommendation is to start B12 treatment first and then introduce folate about 24-48 hours after the first loading dose.

Perhaps I should have read this reply first as I had commented about feeling better when a Dr administers injections or any sort of treatment. I am 33 years old but I am still a bit of a wuss!

The problem this time around for me is that I cannot be sure which symptoms I had been feeling were because of low iron, B12 or a chemical imbalance. I suffered a panic attack over a month before and it all went downhill after that. Glad to say I am bouncing back quicker this time however I am serious in taking care of all the issues contributing, or at least not making it any easier, to my anxiety symptoms. You have shown me how related these can be especially the B12. Thank you.

My GP took bloods to test for coeliac but I have not gone back for the results- had there been an issue I would think she may have called me. I will be going to see her later this coming week. She has put me on Ferro Grad C tablets for my iron in the meantime. I hope going for the B12 jab while taking the iron doesn't eliminate the progress of each other.

I in fact started to get those weird head jots again a night ago but I was able to sleep through it without giving it much thought. I find it curious that it has been over a week since my last B12 and this has started up again.

people vary a lot in the way they respond to B12. Some people just need it much more frequently than others.

B12 is used by a lot of systems in the body - amongst other things it also helps in the process that resets neuro-transmitters so symptoms can come back very quickly. I find that my neuro-psychiatric problems start to return within 24 hours of a shot.

Iron and B12 aren't going to interfere and you will need both to correct any anaemia that may have developed whilst you were deficient.

Thank you again. For now I will stick to B12 jabs and iron supplement as my Dr has me following and go from there. I will also ask to have further testing for malabsorption

Can't rush it all.

would suggest that you do ask about folate - the result you had above seemed to be ridiculously low unless it was a typo (0.45). Folate and B12 are used together so having two little folate will mean you don't get the full benefit of B12.

Will do. I have a list of things to ask and will add this to it.

I have other results but I'm not sure what's...

I gave up wheat years ago although do eat bits at the moment whilst I'm living...

that I had low B12. Anyway it took nearly two weeks to get the results and it seems my results...

D level was also very low. The result I am most worried about is my vitamin B12 as I had a blood...

Hi, I'm new to this site but hoping that you can all help with my recent blood results. I've been...

B12 and COVID injections