Knee: 😲 omg I have been suffering something wicked... - NRAS 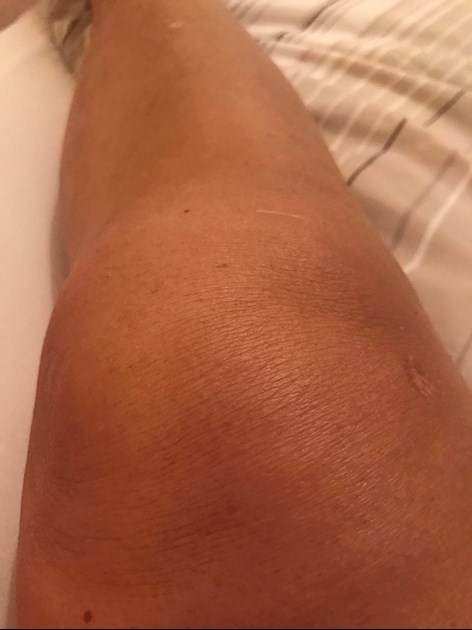 What can u take for it? Have u tried compression??? Ice packs? Every prescription pain killer u can get your hands on?????!!!!!

What will orthopaedic chap do??

Philip in reply to Phoo2

Chop it off, probably.

I'm only kidding of course but someone has to laugh at the state we find ourselves in!!!!!! so horrible it's feels untrue!!

Oh my gosh I hope you get relief soon. Can't say for sure but it looks like you need fluid drained from your knee. My knees swell sometimes. Its been a bad few days For me too. I can't seem to get rid of my pain completely. I pray for fast healing for your knee.

Make sure u don't have a bakers cyst behind the knee joint?? I have had that and it causes the whole joint to swell and makes it immobile. Hope u get relief soon x

Deejojo in reply to Hidden

Hidden in reply to Deejojo

Hopefully they'll sort it out for you. I needed steroid injections into the knee which helped a lot Xx

If there is also fluid contributing I have found laying on my back with my butt against the wall and my legs pointing skyward but leaning against the wall helps. Do for 20 minutes 2 or 3 times a day.

Huge hugs and sympathy to you.

That looks SO sore. Ask if you can get the fluid drained from it and get a steroid injection directly into the knee joint. My knee was badly swollen last May, although not as bad as yours, and it made a massive difference.

Sorry to see how swollen it is! They might give you a steroid injection and remove the fluid using a syringe. Not the most pleasant experience but it should help. Have you tried warmth 1st thing in the morning to help loosen the stiffness and a cold compress for 10 minute periods throughout the day. Also try to elevate it. X

Do that while I'm awake it would set me off with.my panic attacks I'll have to see what he says when I have my appointment x

It isn't as bad as it sounds 😉 Especially if you don't look.

And take someone with you. X

I recently had a knee replacement, and probably will have to have one eventually on the other knee. Massive swelling and bakers cysts a problem. The injections and fluid drainage is in fact such a relief, that I look forward to having it done, as the relief is pretty instant. There is nothing to fear about having that done, just don't look, it is over in no time and is not a big deal. I have never felt much pain while it is being done. Replacement knee was the best thing ever, I put up with pain and disability for 10 years, such a relief now.

I just wish they would do mine I'm 60 in November

I was 61 when they did mine, and now just over 3 months later, I am so glad that I got it done. I had to push for it though.

How long did u wait Hun ?? And what was the issue with your knee ??

I have been having trouble with knees for a long time, and I was told in 2009 that I had a torn meniscus. Later I was diagnosed with RA and OA. Knees got worse and worse, they have always been the joints that caused me the most problems. After insisting on another x-ray on my right knee, it was bone touching bone and very painful. I had been having steroids and knee drained for a few years leading up to this. Then last year I saw a specialist and got on his list, there was a bit of a delay as it was cancelled once and pushback once, but from seeing him to having the knee replaced, I would say about 6 months. The fluid would (and does on my other knee) build up and I have a huge lump above my knee, also bakers cyst behind the knee. To me it feels like I have an inflated blood pressure cuff around my knee, it is so tight and swollen. Walking any distance became an impossibility, I limped and couldn't wait to get home and rest. I am managing with my left knee but know it is a matter of time until I get that done.

Tight I was told

It was oa then told I have ra I've had sooo many arthroscopys but mine have just got worse this gent I'm seeing next week said I needed a replacement 5 years ago. It he wouldn't do it cos of my age hope he will consider it next week can't keep going on like this xx

When I had mine done, rather coincidentally my 90 year old neighbour was in the same ward, having hers done. They didn't want to do hers because of her advanced age, but she has done amazingly well and I saw her driving last week. I know of people in their 40's who have had it done, I don't regret getting mine done. The operation itself lasted 50 minutes and that was it, home three days later.

Eiram50 in reply to Chalmers

I had total knee replacement in both knees ( done at the same time) last year - age 48. Sore as hell but well, well worth it! Best of luck

If you need to go to the emergency room. Especially if it's constantly hurting. Also if you need to use crutches to keep your weight off of it maybe that will help the swelling if you moved around on crutches for awhile. Good luck.

another embolism. Ok I now need a knee replacement but I am high risk. I have had my pre op now...

I have been told I may have to have anew knee , but know a lot of people who have had this down an...

to see my orthapeadic consultant can't keep going on like this need to get this knee sorted when I...

call from the consultants secatary(excuse spelling) about my swollen knee. I am to have the fluid...

Feeling cold all the time

Do all rheumatologists check joints for bogginess?