Much improvement in one year with Eylea - Macular Society 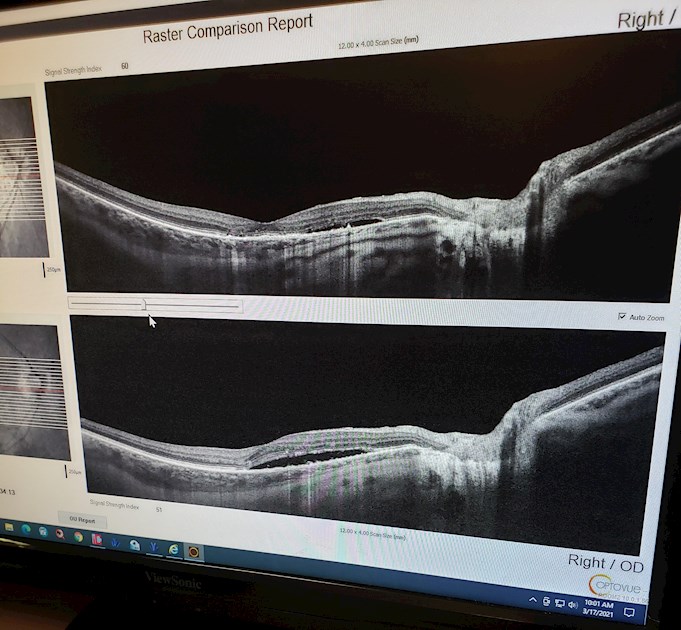 After one year of Eylea my OCT test shows good improvement! I have attached the before(bottom) scan where in the center you see large black area, which is fluid leakage....

In the top scan you can see the black area has diminished!! Eylea is working for me!

That's fantastic Joankelley, I'm so pleased for you and long may it continue. xx

I am hoping this comparison will encourage others who might be skeptical about the Eyelea injections.

Just wondering, how are you doing?

Not too badly thank you although I did have surgery mid January for a detached retina but it was caught early and has healed well. It has made the cataract which was there bigger though which the retinal team did tell me would happen. I went yesterday for another injection and was lucky enough to see the optometrist I used to see but haven't seen for a year now, he's put it on my notes that when I have my next injection in six week (🤞?) I am to have a conversation with the retina team about having the cataract removed, he did speak to someone yesterday but they advised it was too soon after the operation and it must be given chance to heal well. Hopefully by then all will be well enough for me to have it done. Thank you for asking and I hope all is well with you too. xx

I, too, had a detached retina repair.....was on my left eye, which has CSR (central serous retinopathy).....all went well, and my vision was saved, although it was impaired with the CSR. And, 10 years all I had cataract surgery, which has been very perfected, with minimal problems. All was fine for me, and I have every confidence it will be for you, too.

Thanks for that and I'm really glad yours was successful (mine was on my left eye too). The optometrist did tell me that afterwards I will still have the central blur as I have damage to the macula from not seeking help quick enough when it all started. He also said yesterday that I would have to take my last prescription with me - did you have to do that?

CSR causes central blur, too.....in that eye I have only limited peripheral vision. To read and for distance I rely on my right eye (the one getting Eylea) .

At my recent optometry exam, the dr. said the prescription for glasses and contacts is the same.....he said did NOT need to be changed, my vision was basically the same as it was prior to Eylea.

Eylea seems to suit me as I didn’t need injections on 2 appointments. My consultant is suggesting laser will mean even fewer injections so awaiting the dye test

Much congratulations! I hope I can be like you and skip a few injections. My X-ray is proof that Eylea is an effective medication.Please keep us all informed about the laser procedure.

I will do thanks

Good news Joankelley, like you I too have been having Eyelea injections for a year now, and they have very much improved my eye leakage too. Very encouraging. Best wishes.

So pleased that Eyelea is working so well for you. I have found that it works better for me than Lucentis and looking at other replies it seems too work well for a lot of people, which is good news. Best wishes.

Brilliant news, Eyelea is working for me too.

Hi all. Was waiting on eylea appt after review last week but a rapid deterioration in vision...

avastin for 3 years but it stopped working .I was changed to Eylea last year but have to get a shot...

within that area objects are not too clear.

I had 7 Eylea injections over the year the last one at...

sudden extreme distortion in vision in one eye just before Christmas- my optician immediately...

moving on to eylea next!

After ny visit to the American hospital in Paris, i wasn't too sure about their opinion as they...

TERIBLE EXPERINCE DURING AND AFTER MY LAST EYELEA INJECTION ...