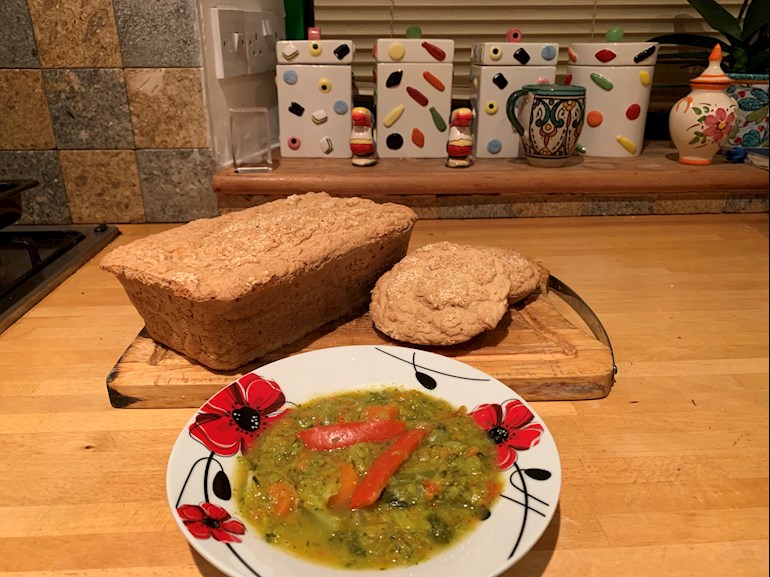 Here's what I had for my meal tonight, the soup is made with Leeks Chantenay carrots broccoli tender stems celery red pepper onion ginger and coriander which I par cooked before I blended some with some nutritional yeast and left some nice chunks of vegetables. I love soups it's very comforting.

The bread is made with Kasha/buckwheat flour and half gluten free bread flour and I used my usual bread recipe and the texture is lovely and soft I'll be experimenting with buckwheat and bread more now. I also added pumpkin seeds sesame seeds ground linseeds.

I had a freshly baked roll with a bowl of soup. 😊

Firstly, my eyes were drawn to your lovely Liquorice Allsorts Jars - very funky!

Your meal looks really good too - and the bread is fantastic. I bet it all tasted really good. So many great flavours - plus a beautiful bowl.

Agoodenough in reply to Zest

Haha. Same here. I was wondering what’s in the jars! 🤣

lol - hopefully Jerry will reveal what's in those jars.

That would be telling...😂

Agoodenough in reply to Jerry

Thanks Zest, I like kitchenalia and I spend enough time in the kitchen can’t bresist somethings, 😊

Your soup and bread look wonderful, I bet that was bursting with flavour 😊

Thanks Debs, that’s where the jars live so I’m used to them but I do like nice bits n’ bobs. And I enjoyed the soup and the bread was a first attempt too. 😊

Right up my street ❤️

Hey thanks, I had crumpets for lunch with butter yeast extract grilled double glos cheese and rings of organic onions and they went down a treat...😊

MisslovelyVolunteer in reply to Jerry

I love marmite & crumpets and double glos cheese too 😍🤣😍

Pleased to see that you have tried buckwheat. Did you use some soaked groats or the flour for the bread?

I make a banana cake using half buckwheat, half rice flour, which works well. Have also tried making a traditional European apple cake using just buckwheat, but it’s very dense with a strong flavour, and not to everyone’s taste.

Looking forward to seeing future creations from your kitchen.

Hi Penny, I used half buckwheat flour and half gf white bread flour with a little baking powder and cider vinegar to help it rise and it rose more than I wanted and went over the side of the baking tin but it turned put fine.

I love cooked apples so will have to check out buckwheat and apple cake so thanks for the tip and no doubt I'l let everyone know. 😊

Here's some gluten free bread rolls I made with 1/2 buckwheat flour and 1/2 GF brown bread flour...

free bread rolls made with GF bread flour and buckwheat flour with seeds.

Healthy(?)Food for our Picnic Basket

Is a sandwich a healthy meal?

Two for the price of one😊