I find it does, and judging from few contributors, I am not alone in this view. I will say from the start, Traumatic Brain Injury (TBI); like I experienced, is far from a 'funny' thing! Particularly for the family and friends of people who have had one! Memory problems, can have many negative repercussions, that leads almost inevitably to frustration, and depression and trouble making your opinion across.

Now I have regained confidence in communicating, I find people have found my 'stories' of memory experiences have usually been met fairly positively. I have only really been recounting tales for about 2 years post accident, my memory having vastly improved, and I became more confident with speaking.

A few days later when visited by other fire fighters, my wife asked if they could help me by trying to help me remember who it was. He was a former junior officer on my watch, and would have been well known to me. My colleagues gave me lots of information to try and spur my memory. When they said, "Come on mate, You must remember Sticky Whitepants" Then it all flooded back. The fire service, most people have a 'nikname', about the only thing 'London's Burning' got right!

Hope people will find this at least rather amusing. I will recount a some more another time. For now! 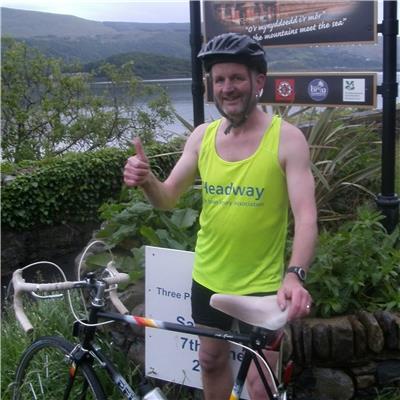 miracleman
To view profiles and participate in discussions please or .
12 Replies
•

My humour got me through a lot and when some of my friends visited theirs was even more of a pick me up especially the times they basically took the **ss.

I was very lucky in that my memory was fine and amazed some them what I was bringing up and a big confidence boost for me by doing this.

I have got some very funny moments of my time in hospital...even as far as getting my hair cut in the toilets by my hairdresser friend...

Humour is and was an absolute life saver, at least it is for myself. I try to find humour in absolutely every aspect of life, it's a must.

Laughter is a big part of medicine. It's free too which helps.

We had an amazing Xmas when I wrapped everyone's gifts but forgot labels, that bought a smile yo everyone face!

After the panic was over and I was safely home my son & daughter were given my full blessing to take the P which was usually at my instigation anyway.

So instead of dwelling on the scary memories of the SAH debacle, we always managed to find something hilarious instead ; like despite being in a state-of-the-art, immaculate hospital, I kept repeating that as soon as I could get out of bed I'd give that 'filthy ceiling' a good clean.

And despite the feeding tube, catheter, drips etc, I pestered the staff that I really MUST have a ciggy and it wasn't a problem as I'd blow the smoke out of the window (there weren't any windows in ICU). When no one obliged, I began a campaign of 4 letter words, much to the cringing horror of my kids who, at the time, feared a serious personality change.

And that was a fraction of the embarrassing events. At the time certain things were upsetting, like my thinking my daughter was a neighbour and calling her by that neighbour's name for weeks, but it's now relegated to the collection of silly stories which have gradually nudged all the gloom and doom out of the spotlight.

we have laughed together a lot over the difficulties & memory problems my husband has had in the two years since his brain injury. its helped tremendously, though we do get funny looks from other people when in company & we tease each other & laugh at something.

Oh my goodness in our house if we didn't laugh our way through this stuff we'd either be dead or in prison...

Some outsiders sometimes find our humour a bit dark and they are shocked that we can laugh about certain things but if we did not treat the dark stuff with a liberal serving of humour we would drown in our own misery...

Oh the stories I could tell...if only I remembered them

Yeh it does help err don't know what else to say

Oh lord yes, not the early days, since I was simply too out of it and frankly I hardly remeber the first month. But after that yes, I fell for all of the very obvious April fools in the media.

My wife used to confuse people by asking if I was okay with bags of shopping etc, when out. My wife is quite wee while I'm tall and althleticly built, so didn't look like I needed help!

Time for another story of post accident memory problems. It is difficult to know if I actually remember it, or just have heard it recounted so many times it has sort of 'lodged!'. Whatever:- (if you have read my 'My Story' sorry it's in there!

My wife visited me every day but one, the six months I was imprisoned! She missed one for a Headway Meeting. One day the remains of my dinner were still in front of me. Oxtail soup, followed by roast chicken.

"Have you just eaten that?"

"You've been a vegetarian for 20 years!"

A new staff member and an admin error! Well it was Mid' Staffs, at least I am sill breathing!

"I bloody enjoyed that!"

I have gone back to not consuming anything that used to have a face!

When I started coming for weekend home visits, my wife and I started to enjoy the physical side of our relationship more. I had been in hospital for 5 months, and this was to prepare us for my release. We had coddled and kissed while I was in hospital, of course, but now in private it could move on a bit! I was concerned that should things get anymore amorous, I had not got any contraceptives! I had remembered she my wife had had a bad reaction when she tried The Pill', so we used to use condoms.

- Was she now of an age were had passed the menopause so we would not have to worry? I knew it was unlikely, she was only 44!

- Had they been moved from where they used to be?

- Had she tried successfully to take oral contraceptives again? If so why? I knew we had not participated in nuptials in the 5 months I was incarcerated!

So one night when things were moving on a bit from cuddling and snogging, I came clean:- "I don't know if I need anything, but I have searched my top draw and wardrobe and can't find any condoms!"

"You don't remember, do you? You had a vasectomy shortly after our third child was born, 7 years ago!" And as soon as she said it, I recounted the procedure. It was performed by a locum, under local anaesthetic, and when we were chatting, and he revealed he was in rented accommodation. I did my duty as a fire fighter, and checked whether it had a smoke alarm. When he said his flat didn't, I whipped out a card giving a contact number to allow him to arrange a visit giving fee fire safety advice and the fitting of an alarm. I also pointed out this was really his landlords responsibility, but if he called the number and said he didn't have an alarm, the service was obliged not to leave a home un-protected.

I also remember recounting my experience of the procedure to a colleague, who's wife had been trying to persuade him to have the 'snip', as their family was complete, and he had been resistant! I was back at work two days after my operation with minimal pain or bruising.. I told him there was 'nothing to it'. Encouraged by me he booked in to have it done.

When he did eventually come back to work, over a week after! He walked like John Wayne, was tender, and insisted I viewed the extensive bruising! Waste to knee! Ouch! :0

A Sense of Humour Always Helps.

unconcious for three weeks and then having to learn to walk and talk again, I have gone through...

No sense of humour at Dunelm

my surprise when to ease my pain, my tension, my wife returned home carrying a brand new 'Tension...

here's my first attempt. Having read many posts there seems to be quite few people with a musical...

problems, stress and anxiety. I'm trying to find a professional who deals specifically with vision...

Back to the scene of the crime

My wife found it especially emotional as she was the one who remembered everything from finding me...

Sleeping so so much zzzzzzz