Rashes with Ibrutinib: Hello, my mother is on... - CLL Support 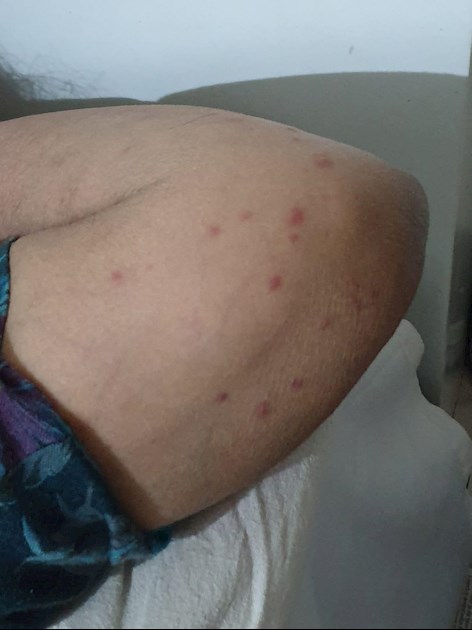 Hello, my mother is on Ibrutinib for an year now and her blood counts are gradually improving. However, today I observed rashes on her arm which are non-itchy yet; appear to be Ibrutinib related. Pic attached. Has anyone experienced these? thanks. Vik

Vikpp
To view profiles and participate in discussions please or .
Read more about...
18 Replies
•

Adding "Imbruvica" to the search query increases the number of returns to over 1,900, but the experiences of only two members are returned in the first page of results.

Unfortunately, the site search isn't sophisticated enough to return results for "Ibrutinib and rash", but just "Ibrutinib or rash"

AussieNeil taught me how to use Google to get more useful results on our unlocked postings. Insert this string in a standard Google search box < site:healthunlocked.com cll support/Ibrutinib+skin+rash > it returns 189 results.

I have experienced Petechiae and occasionally mildly itchy skin and plaque psoriasis since 2006, but Ibrutinib really made the rash strongly itchy.

Over the years I've had many biopsies; dermatologists and pathologists postulated Psoriasis, Eczema, drug reactions, and more recently CTCL or Mycosis Fungoides. My CLL expert doctor thinks that my refractory HHV6a infection is the cause.

The common result from expert pathologists that ran flow cytometry on the biopsy, was finding many T-cells and CLL cells in a specific layer of my skin. But the puzzle is why they are there.

Our archives has 500 replies that mention skin issues and CLL:

My most successful treatment was Photo therapy (lightbox treatment with UVB rays 3X per week- similar to a stand up tanning bed, but with medical precision on light frequency and duration).

In winter - dry cold weather, if it becomes itchy and bothersome, I use Triamcinolone Acetonide (prescription steroid cream) for 2-3 days then switch to a good moisturizer like CeraVe until the rash is well controlled.

Thanks Len. Sry for a late revert as I am in a different timezone. Good to know that it's nothing serious. Can it be that you have an allergic reaction to something that that you unknowingly consume regularly ?

Hello Vik, Is your Mum on any other drugs apart from Ibrutinib, which might have provoked the rash?

After having been on Ibrutinib for some time, I was prescribed Co-trimoxazole as a prophylatic against possible infections. Within a few days I started getting nasty spots then rashes. My haematologist suggested I stop the Co-trimoxazole, and gradually the rashes cleared up. He said I wasn't high risk for infections anyway, so should be OK without it. And I have been OK.

Ibrutinib does tend to cause skin problems for some people, and sometimes it's only when an extra drug is added, that the rashes appear. I've taken Co-Trimoxaole in the past and had no problems. It's as if our bodies are OK with a certain amount of medications, but adding an extra one can push our bodies into a bad reaction.

This might not be the case with your Mum, but it's something to bear in mind.

Vikpp in reply to PaulaS2 years ago

Thanks Paula for your revert and sry for a late revert as I am in a different timezone.

Yes, indeed, I think it's worth considering since she is on Valcivir (500 mg) which is an Anti viral drug that her hematologist has given since the start of covid for prevention. Other that that, she takes Febustat (for uric acid control, kidney related ) since an year, calcium (500 mg daily) and Moringa powder (organic health supplement) since 2 months. We are considering getting her covid vaccinated post which we can stop Valcivir and see.

The red blood spots (petecheae) are not uncommon. I have them on both upper arms, on upper stomache and quite a rash of them on top of one hand. My doctor is aware and watching it. An unwanted side effect of ibrutinib is bleeding and that's what you want to watch for...any blood in urine or dark stools or bleeding anywhere else.

Vikpp in reply to Phyllis7312 years ago

My husband had a rash from Ibrutinib starting 14 days after he started on the drug. It lasted three weeks. He is still on ibrutinib 8 years later.

Vikpp in reply to Ibru2 years ago

Tapps in reply to Ibru3 months ago

what did the Doctor prescribe for the rash? And how long did it take to clear up ?

Ibru in reply to Tapps3 months ago

It appeared 14 days after starting ibrutinib. Doc said if he could wait it out, it would probably disappear. He said to take Zyrtec. The rash was gone in 1-3 weeks, he discontinued the Zyertec and the rash has never returned. He is still on ibrutinib 8.5 years later.

I had a rash on the lower left arm and hand that appeared within thirty minutes. Took while to disappear. Happened about six weeks after starting ibrutinib. Do seem to get lots of under skin small bleed spots but doesn’t give any problems.

Vikpp in reply to street6752 years ago

Ask your doctor about a prescription for Triamcinolone. It is a topical ointment which is used for inflammation.

Ibrutinib and a rash

CLL. They started her own ibrutinib and she developed a serious rash. They took her off it and they...

wondering if anyone has experience the rash. I see lots of diarrhea but no mention of rashes...
•3 years ago
25 Replies

Rashes with Ibrutinib use

scaring me is the rash developing on his face and neck. Has anyone else had rashes develop and what...

Terrible pimply rash whilst on Ibrutinib

excellent, my latest blood test showed normal blood counts although there was a higher level of...

Has anyone developed a horrible rash while taking ibrutinib

On my third week of ibrutinib and have developed a terrible rash that has covered my body. Is this...

About to Start Treatment

Compromised Immunity: So What Does That Really Mean?