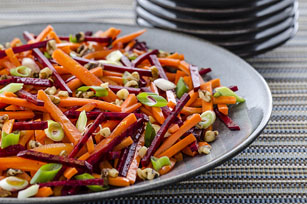 “Let food be thy medicine and medicine be thy food.”

People are obsessed with trying to find short-cuts to lowering cholesterol including the use of various pharmaceuticals. However, what the Ancient Greeks told us 2,500 years ago is that our medicine is right in the foods that we eat.

Watch this 4-minute video to learn about 3 foods we can eat daily to help us reduce cholesterol, detoxify the liver and improve our health in general:

Here's how you can combine them into a salad:

Note: replace the Granny Smith apple with a red apple in the recipe.

sos007
Ambassador
To view profiles and participate in discussions please or .
Read more about...
21 Replies
•

sos007Ambassador in reply to Paul124 years ago

Thanks for the info Paul.

We can classify this one under 'don't shoot the messenger' - beets, apples and carrots are all high in fiber and we know that fiber lowers cholesterol. The percentage of decrease in cholesterol may be unknown by eating these 3 foods - but we know they will certainly provide some level of LDL cholesterol reduction and/or other cardio-protective benefits.

Here are references to the benefits of these 3 foods:

We also know that eating a whole-foods, plant-based diet that includes vegetables and certain fruits will promote a healthy body weight and general well-being.

I did hesitate before posting as I like what you post and admire your success. I just posted the link as the name rang a bell...

sos007Ambassador in reply to Paul124 years ago

No problem Paul. Skepticism is a healthy part of learning and debate. Here's another interesting 3-minute video on the health benefit of beet root:

Who is the guy in the Vid?

sos007Ambassador in reply to weee4 years ago

I don't know who he is. The health merits of beets have been established by medical studies. It is high in fiber and provides other important nutrients.

weee in reply to sos0074 years ago

I'm in..I made the salad last night - it was delicious...

sos007Ambassador in reply to weee4 years ago

Well done, good for you!!

To enhance nitric oxide production in your endothelium to induce vasodilation (relaxation and expansion of arteries' lining), it is important to have one of these 4 foods daily:

These are also high in folic acid which is important for reducing the risk of blood clots. Half of all heart attacks and strokes occur to people who have normal to optimal cholesterol levels.

Yes you are right to mention Folic Acid as I read a study reported a few months ago that stated the only supplement worth taking was Folic Acid and it had benefits for cardio health.

sos007Ambassador in reply to Stu8884 years ago

Folic acid (B9) works best when combined with the other major B vitamins, B6 and B12.

Berthold in reply to sos0074 years ago

Beets are high is sugar and when I tried some juice and powder the nitric oxide starts to give me a headache leading to a migraine so I have avoided it despite the benefits but now wonder if the 15g suggested a day of raw beet which is a smaller quantity would also do this? I only can try.

sandybrown in reply to Berthold4 years ago

There is hidden sugar, free sugar in food and drinks. Yes, sugar in fruits and veg can be high per 100g. A small quantity do have benefits.

sos007Ambassador in reply to Berthold4 years ago

Beets may be high in fructose (not sugar) but they are also high in fiber which does not result in a high insulin response. Beet juice on the other hand is 'juice' fructose without the fiber - so beet juice, like all other juices should be avoided. Nitric oxide relaxes the blood vessels and lowers blood pressure. If you're on blood pressure medication or naturally have lower blood pressure, having beets in large quantities may trigger this reaction. However if your reaction was due to beet juice and some other added ingredient then the fault is not with the beet.

As far as APOE4 and Alzheimers - if you have that gene it does not condemn you to Alzheimer's Disease. AD is one of the least understood diseases and much of the medical literature in explaining its causes has now come into question.

Today, researchers are beginning to turn to the possibility that AD has nothing to do with beta amyloid plaques, but is instead a vascular disease. AD is now being called Type 3 diabetes. As such, following the Mediterranean Diet which is high in fruits and vegetables, nuts and seeds, and low in animal protein, will contribute to reducing your risk for AD.

Beans are full of fiber and are perfectly fine for fighting any form of vascular disease. I don't know what other starchy vegetables you were referring to in the Mediterranean Diet, but in my case I avoid all potatoes except sweet potatoes.

Legumes (beans, lentils, chick peas, green peas) are a staple in my diet and my triglycerides are extremely low as is my HbA1C measure (4.7 mmol/l).

Stick to the Mediterranean Diet and avoid all juices. I do not have difficulty finding things to eat when I have the full array of foods in that diet.

Beetroot's Gi is roughly the same as sucrose.

Fructose is not table sugar, but it is nonetheless still a sugar, and thickens blood seven times as much as glucose.

sos007Ambassador in reply to Concerned4 years ago

Yes, I realise GL is more important, but Gi can't be completely disregarded. The spiking of blood glucose and/or the consequent impact on insulin is why it was developed originally. Health necessitates ironing out those peaks and troughs.

sos007Ambassador in reply to Concerned4 years ago

GL factors in GI, so it is incorporated and allows you to make choices based on actual impact.

Gi measures the rate; this is important in triggering insulin secretion, peaks resulting in hyperinsulinaemia. Disregarding this is a mistake, just like thinking avoiding saturated fat is more important than a controlled glycaemic-index and glycaemic-load. Concentrating on GL is yet another over-simplification to muddy the waters.

Berthold in reply to sos0074 years ago

Well the 15 grams of beets did not affect me so I guess it was the juice and dried beet powder I tried in the past as you say. Still concerned with BG rising at least 1 point after eating beans and I only eat sweet potatoes but it still hard to get all my calories and have been losing weight and hydration level. What I meant on APOE4 is that they all seem to be insulin sensitive and fat sensitive so it looks like they are all arriving close to T2D by the Dr Joseph Kraft assessment of hyper insulin response. The problem is laid out here and shows different approaches to vascular disease.

The objective is to take the best part of each.

Concerned in reply to Berthold4 years ago

Our body has evolved to eat natural fats, including animal fats, over the last 2.5 million years. It's the fat from de novo lipogenesis that causes problems, resulting from a massive increase in carbohydrate consumption since the agricultural revolution.

The ancient Egyptians used to have the same chronic ill-health conditions that are prevalent again today.

Berthold in reply to Concerned4 years ago

So with a smaller GI load will we get less calories which I could not find info on. Say a boiled sweet potato has a lower GL than a microwaved one. Of course this is a simplification as we are not just living om bread as some the Egyptians were.

Well 30grm of raw beet in short time ends up with a migraine all day. It is like they used to give a small dose of nitroglycerine or NOx to relieve chest pain but some people would get migraines.

get repeated concerned posters asking about Cholesterol levels. Maybe we should have one thread ie...

Can food we eat cause both cholesterol and diabetes?

probiotic supplement which was found to lower cholesterol by 13% in one trial...
•7 years ago
13 Replies

Can Statins cause anxiety?