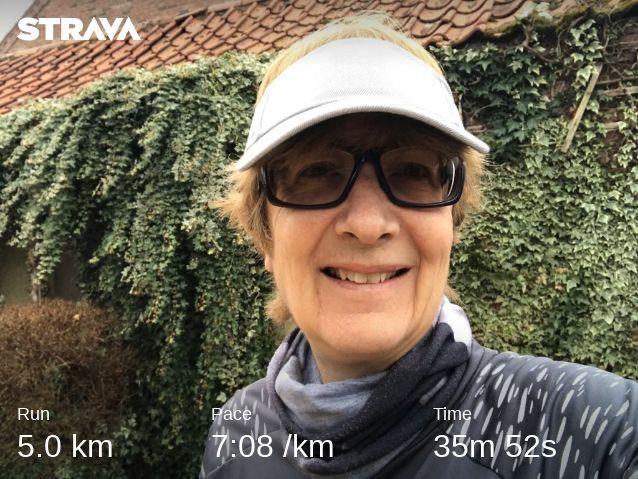 Flushed with the success of a new 5K PB on Saturday, today’s run was going to be a slow 7 or 8K. My circular route was already planned, to incorporate a couple of segments. I’m working on retaking my Local Legend status on these segments 😊

Long sleeved top and running tights this morning. Not my cosy winter ones, I have some others that are perfect for those chillier mornings, without being too warm. Quick cuppa and off I go.

I was really looking forward to my run this morning. Warm up walk over, I start to run. My pace is good and steady. It’s very overcast and I’m a little disappointed; the forecast had promised sunny intervals. I’m heading out of the village and pass the turning for the Deadend Track, but I don’t need those extra couple of kilometres this morning, so I carry on. I turn right along the single track road that links the two main roads. The horses watch me run past. My third kilometre pace is 7:09. Well, that’s a bit fast for a longer run! I try and work out the maths, not something I’m good at while running 😊 I’m thinking I could be close to my 5K PB that I only set on Saturday! Fourth kilometre is less than 7:00 and I’m going well! Should I? I still can’t work out the maths, but decide to go for it! The fifth kilometre seems long and I’m tiring. Maybe not such a good idea after all ......but it’s over and I run on for a few steps and stop the run. Yes, I did it! Another 5K PB of 35:41. This is 33 seconds faster than Saturday!

I walk to catch my breath. I realise that because of my change in plan. I’m over 2K from home. I decide to start a new run and jog slowly home - at least this way I’ll keep to my original plan of 7K!

Arriving home, I paid more attention than usual to my post run stretches, had coffee and made myself some porridge - it’s the breakfast of champions, don’t you know 😊🏃‍♀️🔥🥣

Wow, smashing it! 30 seconds is a massive amount to beat your previous 5km only set the other week. Congrats 🥳

Great being able to start the run again and complete another 2km, I struggle to start up again after slowing down to cross the road!

Thanks! I can only start again because of the change of pace - I just jog slowly. I prefer to jog rather than walk, I actually find walking harder!

Thanks BF 🙏. I’ve no idea where that run came from today!

Well done Jools, and look at those times, your flying at the moment, and on the back of a fast one on sat, bet you feel chuffed with that, and help with all the other stuff going on. 😊

I'm of for another slow 5k soon, on my own today, so music all ready!

Thanks, Peter! I am very chuffed with that. A welcome diversion, for sure 😊. Have a good run 👍

Just got back, another 5k, a bit faster today, not planned, and groin/hip feeling better each run now. 🤞

Well done! Must be the changing season, willing us to go faster! And great news about your hip feeling better. You’ll be smashing your 5K PB before you know it 😊. (Had to check to see what it was!)

Had to have a look myself, 37.42, not really trying to go faster, so hopefully a good sign, was a bit nippy earlier, suns out now! 🤣

It was a bit nippy on my slightly earlier run. I was glad I’d worn my gloves. No cold thumbs! I did check to see if I ran with hitch hiking thumbs, but I don’t seem to. Something is going on though, because they get cold 😂

My hands were cold on warm up walk, but soon warmed up, just shorts and short sleeves today, back to work tomorrow, at last!

Hopefully working won’t interfere too much with your running schedule!

It's mad really, i'd only graduated c25k on 6th nov, my mum had her fall two days later, then the running really took of, will use the weekend for a longer run, but not too long for now.

You’ve certainly had a lot to contend with. Using the weekend for a longer run is great - it’s what I do and I don’t even work. 😊 Maybe I will have to in the future, I don’t know yet.

Excellent run for you Jools2020, all negative spits, that's each Kilometer pace a little fast than the previous one, it won't be long before you smash that sub 35 minute 5K time.

Nice one Jools and we'll done on another PB 😬👍

Jools2020Graduate10 in reply to Instructor57

Woo-eee!🙌💫 I think that’s just one brilliant 7k run. One run, with a short walk interval. The distinction of 5 and 2 is just in the mind and/or your (changing) expectations. And we can reframe the latter as on-the-hoof restrategising. The crucial important mental energy involved in the latter is probably why there wasn’t much space left for dynamic arithmetic.😉

Wow! Lovely negative splits Jools! Isn’t it great when you can make a decision mid run and go for it 👍

Thanks! Maybe I’m warming to 5K after all 😊

LittleoyellowGraduate10 in reply to Jools2020

That’s awesome, you really are speeding up, and you did another couple kilometres at the end, bet you feel pleased with yourself

Speeding up was definitely a surprise, but welcome! Definitely going slow and longer on my next run 😊

I ran 5k in 40.44 minutes once back in the autumn but can’t get near it any more

You could if you trained specifically for it, but I don’t think it’s your priority 😊

I didn’t think it was mine, either! I got sucked in for a few days 😊. Obviously the break did me good. I shall leave 5K alone now and normal service will resume. 😉

Hmm I probably would if I lost some weight, I no longer own a pair of jeans that goes all the way up, I fast and I eat fresh food and I know exactly how to lose weight but it’s stubborn

Difficult if you’re cooking delicious food for someone who appreciates it!

Of course that’s it!!! Poor Willow, no more roasts

Haha, I’d forgotten you gave up smoking as well!

I never forget it, Willow smokes but I never will again, i vaped for 3 years 8 years ago and put on a stone I never lost it when i went back to smoking I gave up 13 months ago and put another one on (sighs) 😂

Keep going with the Michael Moseley Sola 👍 have you got the Fast 800 recipe book? It's worked for me and Mr LOY has the delicious meals with added carbs 😁😋

I haven’t got the recipe book but i’ve gone back on the IF diet, a few days off work and extra sleep has helped,

Thanks for your advice. I will get there 😀

Sleep is always the best medicine isn't it 👍 and time off your rewarding but stressful work. Best foot forward with the running, and never stop patting yourself on the back for quitting smoking 👍

Thank you i won’t

You are simply smashing it at the moment! 😁👏👏👏

Better get those PBs in on the flat, whilst you still can 😉

Thanks. You make a valid point! I don’t want to overdo the fast running, though - next run will be slow. 😊

Look at those splits! Go on Jools2020, smashing it!

You are doing fantastic Julia and looking amazing!

Thank you so much, Rebecca 💕

9weeks2RunGraduate10 in reply to Jools2020

You are smashing it Julia x

on my warm up walk and shorts.

I used Nike Run Club again as I enjoyed it on my 9k run on Saturday....

Thank you all, it’s nice to be wanted!!

I continued with my road back this morning. I was...

Week 3, 5k run. It actually felt a lot harder than running in a morning, even though I'd had over...

Another 5k and Not Quite so Messy

messy, but better than Saturday's run.