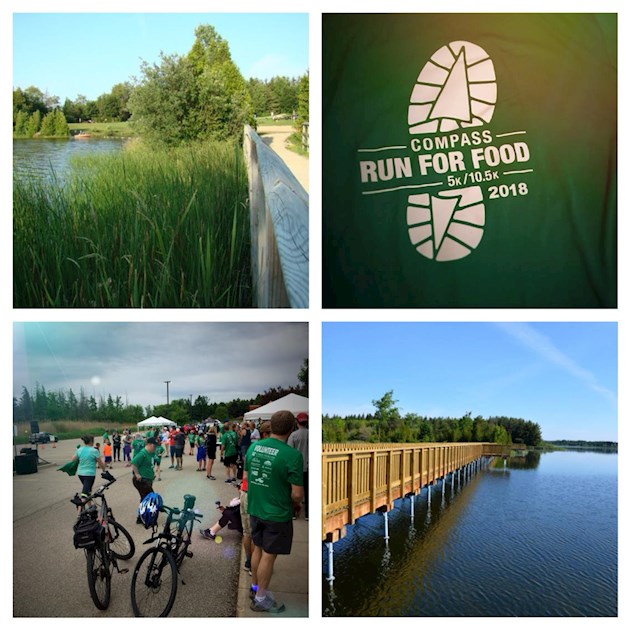 I signed up for this race on a late night whim, not realizing it was over an hour’s drive away, meaning an early start to the day while my family slept. It was run by a local church for their community food bank, and the turnout was a small close-knit group, so I felt a little bit of an outsider most of the morning. Very lovely people just the same. Was on a set of undulating groomed trails with around a beautiful lake with walking bridges over the water. Weather was warm but overcast which was really comfortable. Afterwards I thought I may have pulled something in my hamstring area but it eased up after some stretching. I managed to improve my 10k pb just a little too to 59.30 :).

Thanks Mummycav, it was a good day out for sure.

Thanks Sask. The weather suited it nicely so we could push a bit harder without overheating. Its a beautiful park too

Looks lovely Decker and a great time too! That's an unusual distance 🤔

Thanks IP, they marketed it as a quarter marathon. It was the distance to get fully around the lake too.

Looks like a lovely setting. Maybe the odd 0.5k was to prevent you finishing in a lake!

Shame the locals weren't more hospitable and that the long drive meant no family fan club in attendance. But sounds like you had a great run regardless.

Yes I think the extra 0.5 got us back to the finish line in a clean loop. They called it a quarter marathon. They were all very nice people, they just happened to be a very tight community so it felt a bit odd as an outsider.

Great time, always a new runners dream to run a 10k in just under an hour or a 5K in just under 30 minutes. I was looking at the average times for many 5K park- runs around the Glasgow area, the average time for those taking part in these 5k runs was 28 minutes so sub 30 is achievable for the majority of people training in the C25K program

Thank you AIMorr. I’ve been loosely aiming for sub 30 5k and sub 1hr 10k since I started last year, its just taken awhile to get there on both counts :). The young ones at this race were so fast. One young guy ran the 5k in 17:30!

Beautiful! Congrats on the PB as well 😀

Thank you Nictwit. It was a great day out

Sounds ideal, apart from the hour’s drive. I love small races. They mean something to the organisers and are always warm and friendly with good cakes 🍰🏅😃👍🏃‍♂️🏃‍♀️💕

I prefer the local good causes to the huge affairs. No waiting about in pens and such like 🙂

Yes this was a really friendly community. Was speaking to a woman I ran most of it with and she said they have another run later in the summer to raise money to look after the water bridges in the park so that they can run it for free the rest of the year. They were beautifully maintained. They sold lots of tickets for burgers and hotdogs which all went to the food bank as well, donated by a local sponsor. Great small event overall.

Well done on your PB! Looks like a lovely place to run ... "groomed trails" - ideal! Where I live it's either hard tarmac or very un-groomed trails where you're likely to twist an ankle as you put your foot into a rabbit hole, so I usually stick to tarmac.

I didn't realise it was a race when I looked at your Garmin, so even more super than I thought!

Thanks Curly, yes it was a casual race. No pens, just around 200 of us in the 10k. Was a nice introduction to the world of trails!

Thanks Annie! The bridge pics were not mine, but the other two I took

Hard decisions - to race or not to race?

I've made my decision.  I've been suffering from hamstring problems for a couple of months, though...

for this 10k. Even today I was muttering to myself that I don't ever have to do another race if I...

charity races are, and whether we’re just expecting too much or not.

Kirkley Hall tomorrow, just hoping to run the best race I can and not be last 😂😂

WEEK THREE OF THE QUEST ALREADY? How did that happen? 🏃‍♀️�...