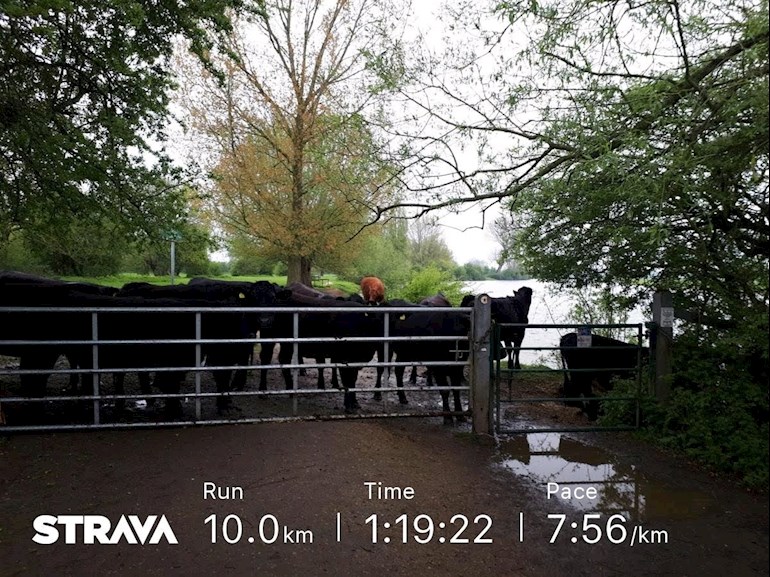 After a tiring 8k last weekend I planned a route for this morning up the river one way and back along the canal - easy, impossible to get lost and meant I could consolidate 8k or go for 9k depending on how I was feeling.

From the outset nothing seemed very right about this run. The morning was drizzly; the car park I planned to park i was closed; the music I wanted to listen to kept glitching for the first 0.5k so I had to switch to the radio; along a narrow stretch of riverside path there was a heron (which was amazing) but was held up by a woman taking photos with arms outstretched so no one could get by; and then at about 2k the path was barred by a load of bullocks!

Now I have a thing about cows - probably irrational but they terrify me and whenever I encounter them I have to rely on the person I'm with to convince me it's ok. There was no one else around. I tried the gate hoping they'd scatter but no they all came closer and STARED AT ME! - the only thing to do (now in my own mad cow state!) was to turn around and find an alternative route.

I spent the middle section of the run then going in roughly the right geographical direction but being on the wrong side of a railway line.

I did eventually pick up the canal and finished the run as intended but having passed the 9k mark a while back thought what the hell and kept going to 10k.

Congratulations. Just did my first 10K this morning too. Feels great doesn’t it 👍 I’m with you on the cows, always worry me 🐄🐄

Congratulations on your 10k!

Think my frustration with the cows help fuel my running 😂

I think we should give extremely large animals a wide berth I have had this where they are right at the stile in numbers 🙂. No way! I am outta there in the opposite direction 🏃‍♀️ If they are a fair distance away, and I have a clear exit route, or an escape route if needs must, then I will proceed

Fantastic. There’s a thread to put your name down for your 10k graduate badge x

Well done! I have a vow phobia too, you’re not alone🙂

We should start a support group 😂.

It was really annoying they were there. I've never seen them on the Thames path like that before - but would have almost certainly only have done 9k if they hadn't been there!

Wow! Lots of first 10Ks runs on here today! Well done, even if it wasn't planned and was somewhat interrupted by the local bovine population! 'All's well that ends well' I guess!🙂

Slow (very slow in my case!) and steady as always seems to be the key (well that and a morbid fear of livestock 😂). Once I decided I was going to do it, it hasn't been too difficult building up to 10k. I think 7k was the point past which I decided it was possible. Committing to running on alternate days rather than 3x a week (which often dropped to 2x because of work) has also helped.

Hope your tight calves (which are definitely NOT DVT!! - what a pain for you) loosen up soon - and you can start Ju-ju's plan. I have no doubt you'll be racking up to 10k soon enough. 😊

Yep, I am going to have to consciously slow the flip down when I start the 10k programme. I have been getting quite quick and my 5ks, and enjoying it – but I am fearful of injury (cue pulled calf muscle!) It's nice to hear about your experience, thanks Debs!

Calves are definitely not as tight anymore but i am still proceeding with extreme caution. With a few more comfortable runs under my belt I reckon I will be ready! I have run 6k a few times, so I think I can do it...

Of course you can.

I still haven't run 5k in 30 mins yet (34 mins is my best time) but felt like increasing the distance would help with speed which it seems to have done.

I just find the act of running outside in all weathers is massively good for my wellbeing - so doing it for longer rather than faster seemed the right way to go. Weirdly (and trying not to sound to new agey) it's a sort of meditation.

Have no great desire to race or run marathons or anything - just like being out there - me, the great outdoors and all that headspace 😊.

Will look out for your increasing distance!

I thought that. You have no aspirations at week 1 except for getting to week 9. Then seemingly in no time at all you find yourself at the end of a marathon 😁

Brilliant! And a great time considering all your efforts to avoid the cows

I was quite pleased with the time considering my toing and froing over what to do about the cows - but to be fair probably wouldn't have done 10k today were it not for them anyway.

Cows totally terrify me, they don’t move away and are very inquisitive!! Well done it sounds like a lovely run 😎

DebJogsOn in reply to ju-ju-

Cows aside it was a good run 😊

Very well done ..you had cows I had sheep today!, I have to say Id prefer the sheep

Me too - but I'm guessing you're not scared of cows!

I'm worried by cows too, even in your running gear, you can't help worrying that they could catch you and trample you! 🐂🐮

Well done to you, not defeated by gremlins at the start, or cows blocking your route, you rose above it all and pulled off a 10k run!

You must be chuffed to bits...brilliant acheivement 😊xxxx

Thank you. I am over the moon - I think doing it by accident was good as I think if I'd set out to do 10k I might have over thought it.

What with all the irritants at the beginning I was fuming when the cows turned up so was then in a determined funk to pick up the route I'd originally planned and didn't really stop to think much about distance.

I am very happy about my 10k though 😊

My first 10k wasn’t really planned either so I made sure I did it again just to convince myself it wasn’t a fluke! 😀

Yes - feels a bit like I've achieved it by the back door. Will definitely have to have another go soon.

Oh no!! Definitely not back door!! I think I was supposed to do 8K on Ju ju’s plan and I just kept going as I had done nearly 9! I just felt guilty that I’d not followed plan! 😀

DebJogsOn in reply to Richard7

Honestly I was so cross about having to double back and then find a different way (Bloomin' cows!) - still 10k was nice. Will have to do it again soon though just to prove to myself I can.

Ju-Ju recommended to me that if you want to keep the distance up try to do it every couple of weeks. I don't (yet) want to do a 10k every week but like the idea of maintaining the distance. Good luck with your next bovine encounter and/or 10k run 😁

DebJogsOn in reply to Richard7

Sounds like good advice. Thought I might have a 'lite' week next week in terms of distance (while still keeping up running on alternate days) and then have another go the following week.

Interestingly..or not..my comeback 10K that I did last week.. was 1 hr 20. 33. and had it not been for the left-overs from a load of bullocks... I might have been faster

You are doing amazingly... enjoy

The badge really suits you

which was very hard on my legs. My original plan today was to run the longer circuits around the...

was so happy to have run my first ever 10k,I had my tomtom watch and phone running 3 apps and they...

of being able to post on here and tell my family, kept me going. Thanks for all the motivation...

hilly run of 4.5 laps - and I find multiple lap runs challenging and a bit demotivating. I run...

Unexpected 1st 10k - how did that happen?

RunLEJOG! I made it home!