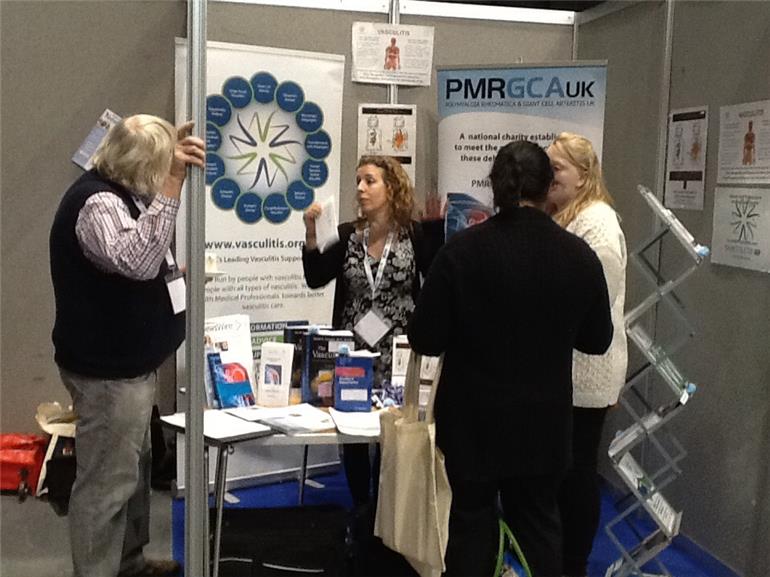 I learnt today, at the British Society of Rheumatology Annual Conference, in Manchester, that 10 years ago at the same BSR conference, there were only about 8 doctors gathered together to discuss Vasculitis, this morning there were over 200. There is still a way to go but things are improving. The doctors, researchers and charities have been working together this last few years. The tide is turning, just so very sad it is late for some, but working together, professionals and patients we will get there.

Wow! That's amazingly! It is no wonder that I was diagnosed late because doctors didn't know about Vasculitis and it was deemed very rare. Things are getting better!

200 doctors, that's almost as many as I had around my bed-when I was first diagnosed. Ok I AM exaggerating, a little here, but not by much!

Suzym2uModerator in reply to AndrewT

hope the doctors who were around your bed at that time, all those years ago, Andrew, went on to share their knowledge with others.

or maybe they never came across another case??

AndrewT in reply to Suzym2u

I don't know about NEVER having another case....but certainly not often, that's for sure!

I just heard back, from John, and yes the 'morons' ARE back-sending out emails, allegedly from him! Maybe we could 'launch' a game, maybe called, 'One hundred things to do with a "hacker"'-answers on a postcard?

Love to you both AndrewT

I think vasculitus is more common then the figures suggest. I base this on the amount of people in my rural area that I have heard are suffering this condition. I don't like saying this but I think in time we will find out its more prevalent then we think it is.

At the Vasculitis 2015 Conference in London, figures were given for numbers diagnosed per population, when we are arrive home from the BSR conference , I will route the figures out.

Vasculitis is not easy to recognise or diagnose, and does have the ability to mimic other less serious diseases. Blood tests are not always conclusive. The initial treatment is toxic and the drugs given for maintenance come with their own side effects.

The UKIVAS Registry, plus the RUDY study and the DCVAS study are recruiting patients to collect clinical data for those who have Vasculitis, and as you say 'in time' the true figures will be known.

Thanks Susan, that will be interesting

I agree with you luggsey. If it's so rare why there are so many of us on forums?

I recently had trouble when my regular rheumy's colleague saw me (this Dr is considered to be someone with extensive research interest in vasculitis). It was a dead end consult..he wasn't listening and he appeared bored..under pressure..extremely dismissive..quite frankly, he had a centre stage throughout. It was a private consultation too.. He's one of the highly respected vasculitis-related authors of a number of articles published on the well respected medical journals. I learned that when someone is so well published and knows loads of superb stuff, it doesn't automatically make him an excellent Dr.

I decided to see an immunologist (recommended by other patients), who swiftly diagnosed me with systemic vasculitis with (likely) CNS involvement (I was already diagnosed at A & E, previously and it was confirmed subsequently). This immunologist suggested me to see his colleague (rheumy). He was able to run loads of bloods (some I already had (e.g. ANCA etc) and some I haven't had. Not that I have a high expectation of his colleague (just being realistic these days), there are doctors who know his stuff and have understanding as to where patients are coming from. However, these are very few..You need both qualities in Drs, not just "knowing his stuff" which isn't enough.

Suzym2uModerator in reply to Hidden

I have to say that all the doctors I know who have an interest in Vasculitis , and are considered the 'top' experts, on the whole, do try their best for all patients. I can honestly say that they all work very hard in either research, clinical studies or with patients. Some work with all three. I would also say I have heard at least one complaint or moan about each one of them, but I do know they all work very hard, sometimes quite differently, but they do also all come together on new clinical research and new projects for those who have Vasculitis.

Hidden in reply to Suzym2u

Ah sorry, I was referring to someone else, who is probably not associated with the VUK at all. It's always useful to know any constructive criticisms (as well as good aspects) about different doctors (via discreet PMs) before deciding who to see. It was heavily due to the lack of "research" on my part. I asked my regular Rheumy about this particular consultant instead of asking other patients!!

Thank you for your additional information. Really appreciated.

The VUK stand was visited by many doctors and nurses. 😊 We met many old friends and made new...

John at the British Society of Rheumatology Conference in Manchester today. About 2000 doctors and...

It is the Vasculitis 2015 Medical Conference starting today. Over 600 doctors have registered. The...

Workshop, Vasculitis UK, together with other vasculitis organisations, will be hosting a Vasculitis...

first Vasculitis Patient Symposium, to run along side the Vasculitis 2015 Medical conference. It...