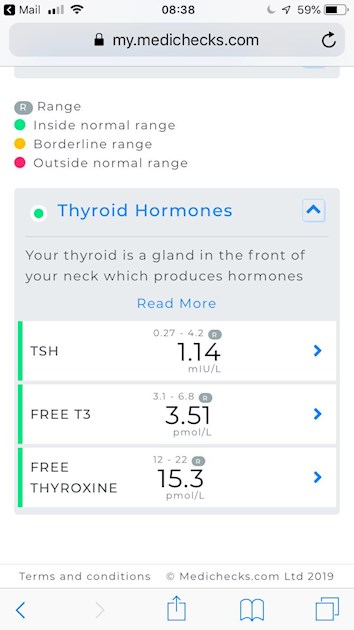 Well I did not expect to be this low on 100ug when I wasn’t much different than that on 50ug. I posted recently that I had the best time for two years briefly and last few weeks been in the worst crash for a long time. Also recently tested extremely highly on saliva cortisol. I am certain that from here on, my GP will not prescribe a higher dose. That’s fine because I have a strong feeling I should be going with NDT to top this up. I’ve seen enough people who say they never felt better on levo alone. The only place I know is totally sold out. Can anyone email me where can I get it? I’m feeling really unwell and need to act fast as otherwise I will crash even more when work returns. Also, does this result make sense taken together with such a big crash and high cortisol? Given T3 has risen so little, is it possible I have high RT3? Thank you 🙏🏻

**No supplier details to be put on the forum, information by private message only** 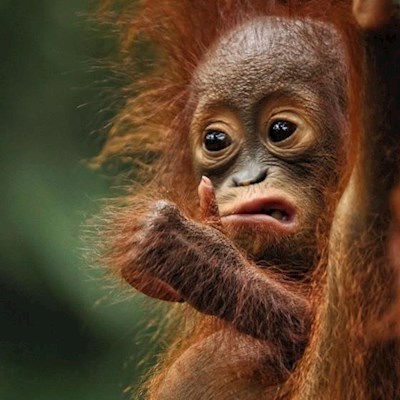 Lenaa
To view profiles and participate in discussions please or .
Read more about...
19 Replies
•

hi agyk, this is normal that the results will be low after such an increase as your body has absorbed what it needed so now it shows you it needs more.

To be completely honest, if your ft4 was high in range and ft3 was low, then I would say you need t3 in some form as well.

Your both results are low, which means that your levo should be increased first to a good level. 100 mcg is not a huge dose, a lot of people end up on 125-200. So you have a bit to go.

Rt3 comes from T4, not T3,no need to be concerned about this, your both results are low. If you had high ft4 or over range, then your RT3 could be higj, but RT3 doesn't really do anything at all.

As I said before, I had high cortisol when my dose was too low and it lasted for a while, at least 6-8 months until it levelled off.

Majority of people are totally fine on levo, and it should be the first line of treatment. T3 is not an instant recovery pill, trust me, 3 years on and I am still increasing and changing doses and hypo.

Also, you ft3 is lower than on 25 mcg because both t4 and t3 hormones, when you take them, suppress your natural thyroid output so you end up needing more until you reach a full dose level.

Thank you. This is all very reassuring. So it is safe for me to increase in spite such high cortisol? I know GP won't prescribe a higher dose. I was lucky enough to make it this far with him as I wasn't officially hypo so getting anything was a massive fight. I have a strong sense that I'd like to top this up with NDT now. I might as well since I will have to buy my own whether it is T4, NDT or T3. I might as well choose the product that will give me what natually thyroid should give me, T4 AND T3. Is it ok to add NDT to levo?

No worries! All this is based on my own experience, so it will need to be your decision.

All you can do is try.

I personally wouldn't try t3 or NDT with such a level of hormones as T3, but it is up to you. Before I went on NDT, I took levo for 2+ years and despite high ft4, my ft3 was low so needed that t3.

Like I said, t3 is not instant recovery, you need to be very patient with it, and can't increase fast, but it certainly helped me, but I had worst results than you.

Is it unsafe to mix levo and NDT?

It is as safe as taking them separately, but because there is a t3 component, you have to start small otherwise you may suffer from anxiety and palpitations.

Do you mean I’d have to take them at separate times of day?

I see nature thyroid comes in 32.5mg. Doesn’t say what proportion of that is T3. Is that small enough?

I personally wouldn't take them separately, but some people split doses.

I mean both t3 and t4 are safe to take in ndt or combinations or separately, if you know what youre doing

I came off Nature Thyroid as a brand, it lost potency, it happened to most people about a year ago or so, but since you are new to it, you may be okay.

I've noticed the other brands are much more expensive....

They unfortunately are. My first NDT was armour, used to pay 40 euro, now it is 3 times more expensive. Not sure about NP thyroid or WP.

I have to take so many other supplements for M.E that I just have to pick what is cheapest.

I see you were dx'd with ME as well, well, my doctors thought I had CFS , but they told me it was caused by low T3. Totally recovered from the worst fatigue I ever had.

I was thinking just keeping levo at 100ug and take the 35.2 NT. Last levo raise from 50 to 100 was potentially the reason I crashed so badly so I need to make the next increase as small as possible.

A few weeks on 100 were the best I have felt in two years and then I crashed... Although I don't know how much of that good feeling was a bit of a false energy maybe casued by high cortisol alongside this levo increase... I just don't know...

But it gave me a taste of how much better I could be. Wasn't cured of ME but everything was just so much more bearable. Still have a little secret wish that maybe when I finally get my thyroid right, my ME will be tons better. At the moment I live in constant fear that I will not be able to work and will end up homeless etc (I only do part time now and can barely manage not only due to fatigue but various brain symptoms and hyper sensitivity to sensory stimuli incl people). I am desperate to get my thyroid right as quickly as I feasibly can otherwise I won't be able to cope much longer. I feel like I am on borrowed time

You have the same symptoms that I had when I was very hypo. I was bedbound, hospitalised, thought I was going to be in a wheelchair. I had to quit my job a few months ago, was so poorly. So I really get it, it is terrible, but it is possible to recover. Anxiety was a part of it too for me, stimuli made me sick, music, people,.my housemate at the time switching the light on.

That increase that made you feel good was a sign that you needed it, the crash was because there is not enough of it. Also, waiting 3 months to do bloods with such t3 t4 is something I would not advise, get tested 4-6 weeks. At my worst, my doctor wanted every 2 weeks I was so poorly. If you leave it too long, then you run a risk of having both hormones low again.

Thank you .. so much hope that things can get better.

Another question, if I was so hypo, wouldn’t my results be even lower? Wouldn’t my temp be lower? I did five days of measurements just now and it’s around 36.5

My temps are not low when I am hypo, it is up to you, if you don't think you are hypo, go with your gut, I just wanted to share my experience.

No, I do think I am hypo. Just wanted to know as I've always been told temp is the best way to measure... which clearly doesn't make sense

tattybogle in reply to Lenaa

It looks quite good it think.

Lenaa in reply to tattybogle

Oh yes I know about that :))) I am deeply involved in biomedical research and advocacy

my NDT. I recently brought a fitbit as I have internal vibrating, and my cortisol levels are high,...

levothyroxine which made me very unwell. I therefore started self-medicating with Thiroyd NDT and...