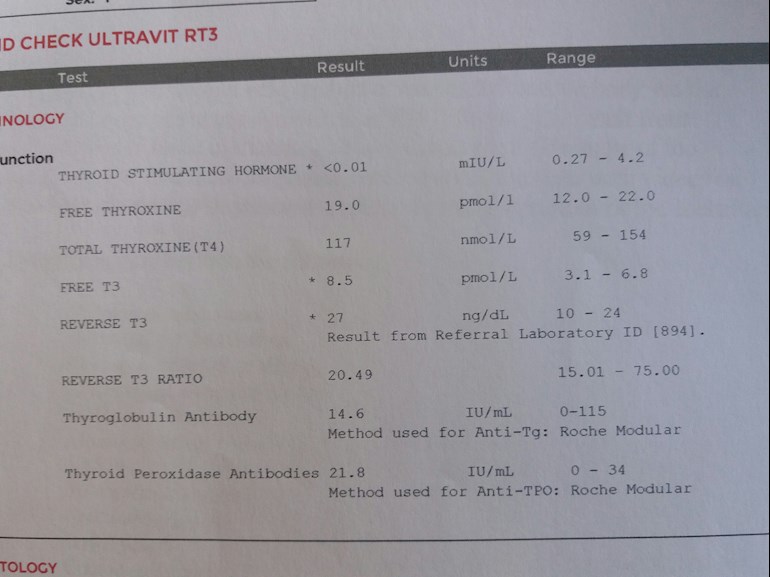 Hi Everyone. I have just had full thyroid panel blood results. I would really appreciate your observations and interpretations to help me make sense of them. I take 2 pills a day of “Thiroyd” from Thailand (split between early morning and lunch time) and had done for a full 6 weeks before these tests were done, so whatever is presented in the results is showing a failry stabilised state.

Hi - if you left 12 hrs between your last dose and test then you are over-medicated, which can produce as many symptoms as under. If less than 12 hrs then actual ft3 result may be a bit lower, if over 12 hrs then you have a false low ft3 and situation would actually be worse than these look.

Also your rt3 is over range, probably because you have relatively too much t4 and this is your body's way of disposing of it and putting the brakes on.

Dependent on test timing, I would suggest a dose decrease.

Thanks for your time and attention startagaingirl. The blood for this test was taken at 10:30am. I had taken, as usual, my Thiroyd pill at 7am that day. Maybe this was not wise? I thought it best to just keep doing whatever I usually do as I wanted to test whether the medication was working. Does this info change what you’ve advised please?

Well it changes the ft3 result element. A test that soon after a dose is like to be falsely high as what was actually tested was the rate of absorption of your tablet, rather than a true baseline level. Hence you are probably not over-medicated.

It wouldn't change the rt3 issue, however. The body produces rt3 as a braking mechanism to slow you down and allow recovery from an illness, for instance. It can also be to conserve available energy to support vital functions when on a low calorie diet, or sometimes when we feed in too much external hormone. You obviously have something going on, though impossible for me to say what. The impact is you will probably feel worse than you should.

Are you having any symptoms at the minute? How do you feel?

Btw, for future reference, dose times should be adjusted before testing to leave about a 12 hr interval between any t3/ndt meds and the test. Also tests should be as early as possible, fasting, with nothing but water beforehand.

Hi Gillian. Thanks again. Just been diagnosed with Pyroluria. That may account for the high RT3? I don’t know what to do now. Feel pretty awful after having had a promising start on the Thiroyd. Now with the Pyrroluria diagnosis I don’t know what symptoms are accounted for by which disorder and what caused what! I’m tempted to go off the Thyroid meds and treat the pyrroluria and see if the low thyroid then corrects itself. If I did that, can I stop suddenly do you think or ween myself off? Also, I’ve heard that the RT3 ratio is important and mine is over 20 which, apparently, is OK. Any thoughts? Thanks so much for your time and patience.

Well I had to look that one up, I had never heard of it before.

I am going to break this down a bit. You query the ft 3 ratio. That is worked out from a combination of ft 3 and ft3. Because your ft 3 is falsely high, your ratio will look ok. However, your absolute rt3 is over range. In this case that is the more reliable number and ignore the ratio.

Could high rt3 be caused by pyroluria? Probably. I see that it also causes depletion of nutrients that are required for thyroid hormone conversion and use like zinc and vit b6. Could this have caused what you presumed to be thyroid issues? Possibly.

In an attempt to clarify, do you have any thyroid results from before you started to take ndt? I don't see any in your earlier post. That is really the only way to determine if you actually have a thyroid problem or not.

If you were to stop thyroid meds, you really shouldn't do it suddenly, even if you don't actually have a thyroid issue. You should lower it gradually in the same timescale for raising. This would give your own system a chance to recover function and avoid shocking the body.

Thanks Gillian. That’s really clear and helpful. I think I basically have to reduce the thyroid meds (slowly) as I treat the pyrroluria and then test my thyroid again should any symptoms remain after treating the pyrroluria. So good to have your advice. Thanks again.

test was done early, but 2 days dose of T4 was skipped as she got up late 2 days earlier and I had...

my latest thyroid bloods and wondered what people thought. I haven’t gone all out and done the all...

I am currently taking 2 and a quarter grains of Thai Thiroyd. Have been...

Medichecks Thyroid Test done. The results arrived this morning and I was baffled to see how much...